Ask any New Yorker their thoughts on the state of the subway system and be prepared to either pull up a chair or metaphorically brace yourself for the impact of an explosive tirade. The city’s subway system is such a hot-button issue that a good deal of the recent Democratic primary race for governor revolved around who was willing to work hardest to correct its failings and, perhaps more to the point, who actually uses it on a regular basis (or even at all). Good news for people who love bad news: the candidate who’s too cool to ride the subterranean rails won.

When stuck sweaty on an overheated platform with far too many of my fellow straphangers, it’s hard not to think that even I could do a better job managing things. Between random delays and the ever-increasing amount of mid-commute service interruptions, there’s plenty of time to fantasize about fixing it all. God curse the vagaries of the phrases the Metropolitan Transit Authority uses to explain those commute killers, by the way – how many “signal malfunctions” and “sick passengers” is one contestant in the rat race supposed to endure before throwing in the towel and moving to the ‘burbs?

When stuck sweaty on an overheated platform with far too many of my fellow straphangers, it’s hard not to think that even I could do a better job managing things.

Dinosaur Polo Club’s puzzle strategy game Mini Metro first found life as a free-to-play browser game after the developers entered it into a 2013 game jam, but anything that allows lowly commuters to have a crack at playing transit chief feels most natural on mobile devices. I’ve had my eye on the game since it was featured on a “Best of” list in Apple’s app store, but it was last month’s Switch release that finally made me give in to temptation. It might make more sense to play on that most ubiquitous of the train-friendly gaming systems, a cell phone, but I love the way the brightly colored minimalist design (evoking iconic transit maps the world over) looks on the Switch’s larger screen. It’s also the only game I have in my Switch library that makes heavy use of the system’s touchscreen controls, another big draw for my preferring this version.

The gameplay is simple: stations appear on a map based on one of many real-life transit hubs – I’ve obviously spent most of my time on the New York City version – and the player drags train lines from station to station to connect them. Each station is represented by a different shape, starting with triangles, circles and squares at the start. Passengers are represented by smaller versions of the station shapes in order to indicate where each of them needs to go. In cities with rivers, bridges and/or tunnels need to be used to reach stations across the water, and the game presents only a limited number of each at the beginning of a round – one commuting week. At the end of a round, additional train lines, engines, passenger cars, bridges, tunnels, etc. are offered to be used for the next round, though the player will always have to prioritize choosing only what’s most needed. 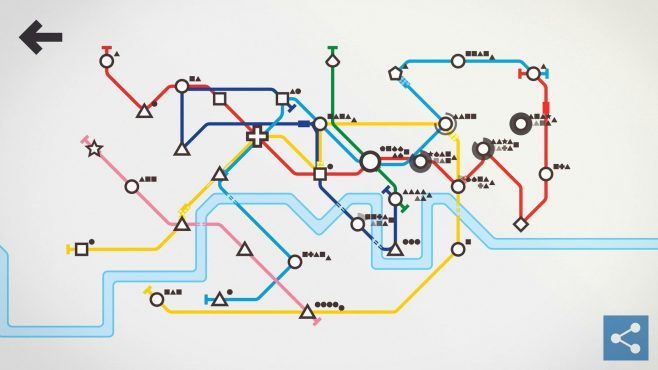 That constant prioritizing of tools, assets and line connections is where the game has teeth – creating a route without enough variances in stations or being unable to make a river crossing leads to station overcrowding, and once you’ve got too many people on a platform, it’s game over for your tenure as big boss of the underground railways. If only this were the case for the real-world subway barons. Also: if only there were really that many options to get across the Hudson River to New Jersey – we’re playing out a true transit fantasy, here.

The sound design matches the rest of Mini Metro’s minimalist aesthetics, with simple clicks and short tones representing the trains stopping and passengers appearing in the stations, and a nice low-level purr of strings in the background representing the locomotives running along their tracks. That vibey drone increases as more lines are added and as the trains travel longer distances, bolstering the sense that the player’s system is operating at a steady hum. Once a station starts to become crowded, anxiety-inducing ticking kicks in to signal it’s time to make some adjustments. These separate parts layer perfectly on top of each other to create an energizing yet strangely relaxing soundscape. “Energizing yet strangely relaxing” may be the perfect descriptor for the game, period.

These separate parts layer perfectly on top of each other to create an energizing yet strangely relaxing soundscape.

The Switch version of the game offers a console-exclusive multiplayer mode with support up to four players. Since I consider it the perfect commuting game, I haven’t had a chance to try out the multiplayer mode, nor have I been able to disconnect the Joy-Cons and perform the Dr. Strange-style manipulations featured in the game’s new Switch-specific trailer. I’m open to both, however, and those different modes of play definitely add to the attraction of this version.

Annoyed as I am by the forced sympathy for the transportation devils I feel whenever I maneuver myself into a fail state, there’s really no higher high than working out the most effective possible scenario for a system map. When everything’s chugging away at peak efficiency, there’s nothing else to do but sit and watch passengers get exactly where they need to go in a timely fashion (at least until the next station appears). Reaching that state of Zen efficiency while sitting on a stalled L train is a heady mix. Mini Metro may only offer me the illusion of power when it comes to crafting a perfectly run subway system, but playing benevolent transit god is one way to pass time on what feels like an ever more dystopian commute in real life.

The Tale of Pompeii and Mount Vesuvius