Ace Combat 7 wants you to feel the visceral thrill of dogfighting without getting too deep into the consequences of armed conflict. While its story builds plot points around actual issues (such as artificial intelligence and the personal and political weight of civilian casualties), it strikes a balance between a deep war story and an absurdist fantasy in a way that avoids taking itself too seriously. This is an arcade-style take on aerial combat rather than a hardcore flight simulator, and its narrative reflects that; think “videogame equivalent of Top Gun” versus a serious war documentary.

Here’s a plot synopsis: in the fictional world of Strangereal, war breaks out between the Kingdom of Erusea and the nation of Osea over perceived aggression following Osean construction efforts near the Erusean border (after the continent was devastated by a meteor strike, and because this is a videogame, this is completely believable). A young Osean mechanic and pilot named Avril Mead gets arrested for following an invading drone while flying her “air drag racer” (a restored F-104 she rebuilt with her grandfather). Her path then crosses with a fighter pilot named Trigger, who’s jailed for allegedly murdering the president during a friendly-fire incident.

Without spoiling too much right away, the plot gets weirder from there; sometimes serious, sometimes wacky and always delivered with a stilted 80s action movie voice (despite taking place in 2019). It feels like it’s meant to give the onscreen action a sense of purpose and a reason to move forward without overly distracting from what you’re actually here for, which is to fly fast and shoot stuff. While it also makes connections to contemporary issues like drone warfare, it never goes deep into any sort of real-world political issues, and as such it never takes a stance on anything with actual meaning outside of the game itself either. 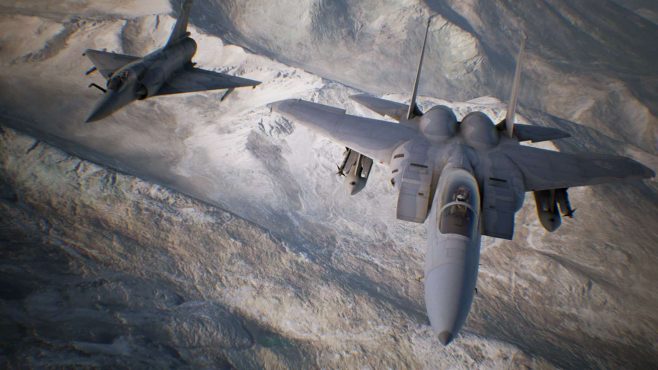 This approach works to an extent. The story works well enough to establish context for why you’re at war, and it isn’t meant to be taken as a deep meditation on the nature of armed conflict (like, say, Metal Gear Solid). Rather, it’s an arcade-style action game in the sky. And it excels at being just that too; the controls are accessible enough to pick up and play while offering enough depth for skilled players to sink some time into mastering. The sense of tension while dropping drones in the clouds is exhilarating, and it’s combined with a rewarding progression structure that unlocks new upgrades and aircraft.

The progression tree is also where the separation between escapism and reality falls apart.

At the beginning of the game, players are given an F-16 Fighting Falcon. It’s a staple of global air supremacy that pilots often liken to a sports car in terms of temperament and handling. As one of the most prolific planes deployed around the world today, it’s a logical starting point that players are likely to recognize. As players unlock more aircraft, they’re added to a hangar where you can select different jets before embarking on each mission, similar to managing cars in your garage in a racing title.

That metaphor between flying and driving probably isn’t accidental either, as players learn early in the story that the narrator once restored warplanes with her grandpa and his buddies, no different than how one might restore classic cars and take them for a drag down the strip. Both have a similar appeal in a videogame context; go fast in a real-life vehicle you’d never otherwise get to ride.

This is exactly where Ace Combat 7’s efforts to distance itself from an actual war narrative breaks apart, however. The F-16 is very much an American fighter jet, and it’s labeled as such on the progression tree, despite the fact that the United States presumably doesn’t exist in the game’s made up world. Neither does Russia, and yet Soviet-era aircraft are described as belonging to that country.

The game wants to let players fly actual warplanes like Gran Turismo wants to let you race expensive cars, but without saddling itself with the responsibility of trying to tell a story where U.S. and Russian fighter jets somehow fight together on the same side of an actual conflict (or, inventing a timeline where they fought against one another like in Red Dawn, which would be in disastrously poor taste given the current global political moment). Either approach would necessitate shifting its tone away from its Iron Eagle-esque vibe to something more like an actual war story, and neither would actually be advisable.

So, how does Ace Combat 7 reconcile the disconnect between its fictional world and the non-fictional producers of its warplanes? In short, it doesn’t and the results create a sense of cognitive dissonance that feels weird even in a game that’s notoriously full of weird shit. For all the effort Ace Combat 7 goes into creating an alternate world where rebuilding warplanes is just a family tradition and your actions have no connection to real-world outcomes, it’s undone by the knowledge that a Dassault F2000 Mirage (for example) is a real French fighter jet sold to the UAE, Taiwan and India (three countries in various states of tension with their neighbors).

As we’ve established, no one is playing an Ace Combat game for its story and its seventh installment is fantastically fun, with no other arcade-style flight sim competition on current-generation consoles. But the unintentional sub-text of its design decisions undermines its sense of escapism its otherwise throwaway plot tries to create, breaking its own sense of illusion by failing to stick within a consistent narrative universe. It almost may have been better to go all the way in one direction or the other, sticking with fake aircraft in a fake world, or recreating an actual conflict and lean into telling a serious war story. Instead, it tries to have it both ways, and comes close but fails to stick the landing in the end.

You can’t have war games unless you want the politics they come with, too.

Observations of the Void