Ever since purchasing just a few knick knacks from AliExpress, an online retail service, my email inbox has been inundated with reminders to shop, delivered with the speed and single-mindedness of a dogged salesperson. The blatant appeal to materialism in these subject headers range from the ludicrous (“Want to shop like a pro?”) to the desperately frenetic (“Sale is on! Shop up to 50% off now!”). Broken Reality, a game I had written about during its Kickstarter days, is brimming with such references, as well as the noxious glut of internet artifacts that range from clickbait ads to malware. The virtual world the game is set in is an explosion of gaudy neon kitsch; everything is filtered through an iridescent lens, and is an absolutely eye-searing but fascinating sight.

What fuels Broken Reality’s bizarro universe is the same kick of dopamine we get from the positive feedback from social media. It replicates perfectly that short burst of gratification when friends and strangers offer their tacit approval of our content with the “like” button. In this game, the goal is to chalk up as many popularity points—or “likes”—as possible, while traversing through a series of glitchy vignettes reminiscent of the internet from the very recent past: the 1990s. For instance, the sound effects evocative of those used in old instant messaging service, MSN Messenger, make an appearance as you navigate the in-game menu, while pop-up ads, a relic from the internet past, are in abundance in this brightly and garishly-hued environment. The soundscape feels like a chorus of plasticky, computerized abstractions of smooth jazz and lounge music. And to give the game a cyberpunk veneer, a mix of Chinese and Japanese words are also plastered across the gleaming surfaces of towering buildings (the inclusion of such words, meant to imply a sense of foreignness and exoticism, is a feature I can really do without in cyberpunk worlds). 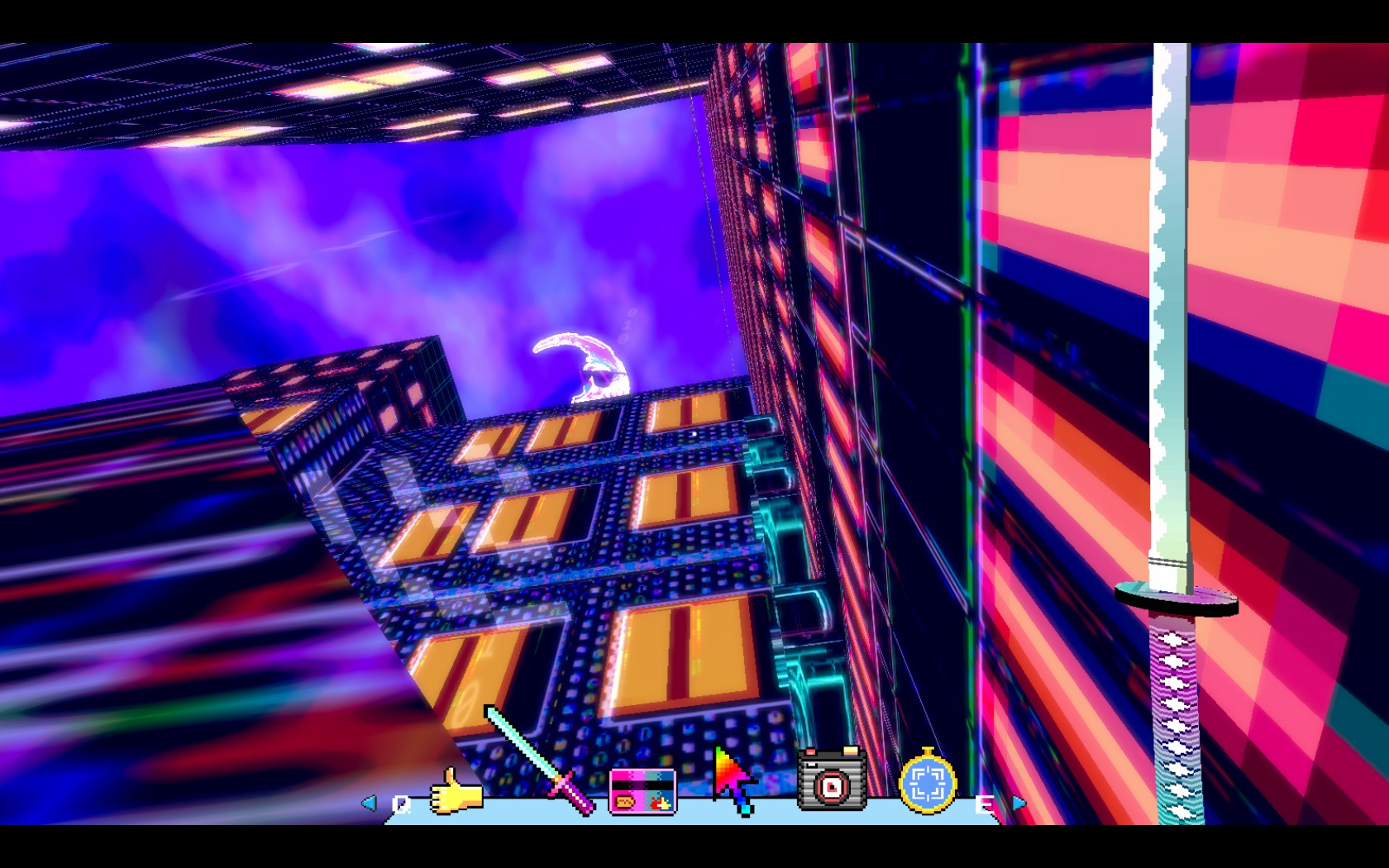 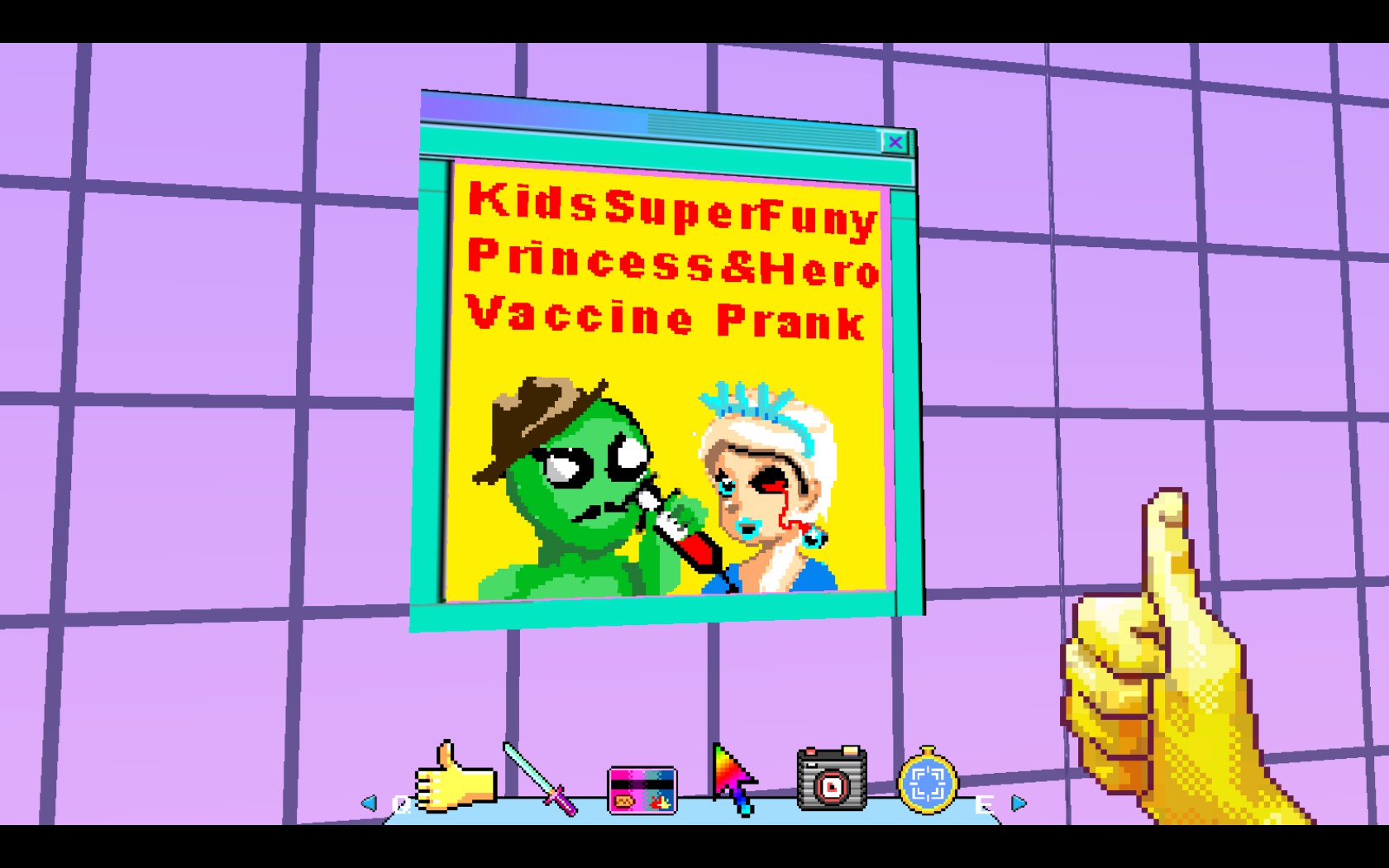 This setting can lull players into an oddly hypnagogic mood, but it’s a stark—and astute—disconnect from your fanatical attempts at gathering likes. Equipped with a clicker in the form of a thumbs-up gesture, you can gather internet points by participating in some rather frivolous activities, like clicking on banner ads repeatedly, or posting meticulously taken photographs of your virtual surroundings. You can score more points if you shoot particularly stylish pictures; one attempt even requires you to make a flying leap across rooftops and snap a photo of the very cyberpunk skyline. And in a blatant display of consumerism, shopping is even turned into a mini game, with Broken Reality egging you to buy more pointless curios in exchange for likes. Eager for your attention, the game flings grandiose-sounding titles like “Master Shopper” at you when you buy enough items in the shortest time possible, all as you lapse into debilitating debt.

As it turns out, collecting these virtual currency quickly becomes addictive, even though the futility of this activity renders it more tedious than fun. Progression becomes a compulsive and meaningless act, the only reward being the opportunity to experience more of the game’s outlandishly charming universe. It’s hard to tell if this gnawing tedium is intentional on the developer’s end, but it at least succeeds in conveying the profound pointlessness of social media approval. This, however, isn’t really a grand insight we are unaware of; in fact, most of us can’t even wean ourselves off social media even though we want to.

Beneath Broken Reality’s shimmering city is also an inescapable sense of lifelessness and artificiality. At times, Broken Reality almost appears as if it’s a hollow pastiche of ‘90s internet culture, with users of the game’s virtual platform speaking mostly in memes and internet speak. Even dialogues with other characters feel performative, as if they are poorly programmed artificial intelligence masquerading as real people. It’s a pity we don’t get to see the affection and intimacy of close-knit online communities, nor learn more about the affairs of its denizens. Yet the opportunity to trawl through and explore more of Broken Reality’s idiosyncratic locations—from the kaleidoscopic chat room lobbies populated by bizarre avatars with monitors for heads, to the once-thriving underwater community where shoals of fish-like cursors glide through the waters—is the game’s biggest draw. In Broken Reality, the internet may be broken, but its vision of a vaporwave city you can get lost in is thrilling, as if you’re right on the cusp of discovering new electronic frontiers.

A Visual Novel To Scare You Sleepless
Previous Post