Dogs frequently feature as background characters in videogames. Frequently enough, in fact, for an entire Twitter account documenting whether or not you can pet the dogs in particular games to exist. Their presence is particularly notable in games about war, such as emotionally grinding Valiant Hearts, the fictional strategy/RPG Valkyria Chronicles 4 and the Advance Wars-inspired Wargroove (which mercifully allows its armor-wearing canines to run away from battle when defeated, rather than getting slain on the battlefield). One developer even snuck his dearly departed dog into a cut scene in Ace Combat 7.

It’d be easy to assume the prevalence of dogs in videogames is driven by their popularity as meme fodder, or the fact that people just love dogs in general. However, their inclusion in war games often taps into the multitude of real-world roles that dogs have played in military settings. From acting as scouts patrolling base perimeters, to secret scouts transporting classified documents, to simply providing a morale boost to their handlers, they’ve been so indispensable allies to humankind in times of conflict, that it’s almost weird to think why any war game striving for historical accuracy wouldn’t include them.

Dogs have been suiting up for combat in modern warfare since World War I, where they were used as mascots to distinguish different units on the battlefield (a detail missed in the WWI shooter Battlefield 1). One particularly heroic pup from Connecticut named Sgt. Stubby (who earned his rank after being wounded by a hand grenade and continuing to fight like a goddamned legend) was smuggled aboard a transport ship to the European front in an overcoat, where he successfully caught a German spy, spent time doing hospital duty and became a lifetime member of the American Legion.

The number of roles employing combat dogs expanded in World War II, where among other jobs, they would join British paratroopers in descending from the skies into enemy territory (including one such pup named Bing, who served for 18 months before being returned to the civilian family who loaned him to the military). Just as they did in the First World War, Allied forces also used dogs for detecting ambushes, laying communication cables, transporting secret documents in false furs and other tasks. 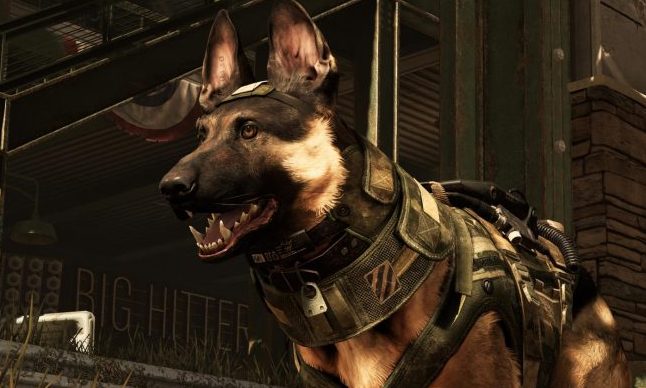 While dogs certainly weren’t shown any mercy by their enemies, the harsh realities of the Second World War also saw dogs used in some extremely inhumane ways by their own sides. They weren’t there for fun or novelty; rather, they had work to do just like anyone else pressed into combat and the results were sometimes grim. For one particularly brutal example, Russian forces would strap magnetic mines onto dogs trained to run under German tanks, destroying the vehicle while killing the animal.

The historical trend of dogs being pushed into increasingly dangerous scenarios continued in the Korean War and Vietnam War, where dogs were often used to crawl through tunnel networks and ferret out enemy troops. This was an extraordinarily perilous task, where casualty rates for human units could be as high as 33%. More recently, canines have played an integral role in detecting IEDs in Iraq and Afghanistan thanks to the Marshall Legacy Institute, which has been training dogs to detect mines in war-torn countries as part of the Mine Detection Dog Partnership Program (MDDPP) since 1999.

All of this is to say that if videogames centered around war and conflict want to incorporate true-to-life applications of dogs in combat, history has given them ample amounts of source material to draw upon.
Whiskey, a bull terrier playable in Commandos 2, can be used to transport items, distract enemies, and sniff out mines. And while it isn’t exactly about war in a traditional sense, Mad Max’s Dinky Di’s usage as a mine-sniffing dog also has a similar real-world basis. The loyal companion Riley who joins the player in Call of Duty: Ghosts can be used to sniff out explosives, as well as dragging pilots out of helicopters. 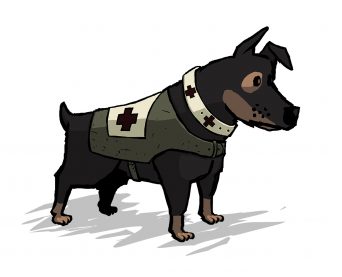 The medic dog in Valiant Hearts may be one of the most touching examples, ever-cheerful and needing to be given food and water, but it also demonstrates dogs playing a vital role in the trenches. Metal Gear Solid V’s D-Dog, found running wild as a pup in the Afghan desert, can be raised to adulthood and trained to serve Snake in a multitude of ways while engaging in guerrilla warfare. While it’s cartoonish, Caesar’s role in Wargroove as a morale-boosting leader on the battlefield also has historical context.

Even with such examples taken into consideration though, dogs arguably remain underutilized in games. Given their widespread use in combat, it would stand to reason that they should be featured to the extent that it shouldn’t be questioned whether or why a dog might make an appearance in such a game. The World War I-themed Battlefield 1 comes to mind as one recent omission, as this thread on Reddit takes some umbrage with.

While mine-sniffing and general companionship appear to be popular roles for dogs to play here as well, there are many more ways they could be used to lend realism and additional gameplay mechanics. Think of things along the lines of sending a dog carrying confidential documents through an air vent, helping to secure a base or running interference to allow soldiers to cross into enemy territory. Those are a few simple ideas, but the possibilities are open.

Of all the struggles for inclusion and representation facing games right now, incorporating dogs in combat ranks low on the list of priorities, and their relative rarity is more a curious oversight of their historical role than some sort of urgent grievance. But the demand for more dogs in games is clearly there, and their placement in war games, in particular, feels like it should be a given rather than an exception, given the depth of history on the topic. So, here’s to more games putting dogs in their proper place, and while we’re at it, here’s to making them petable too.

The Space Between Lacks Meaning in Its Metaphor