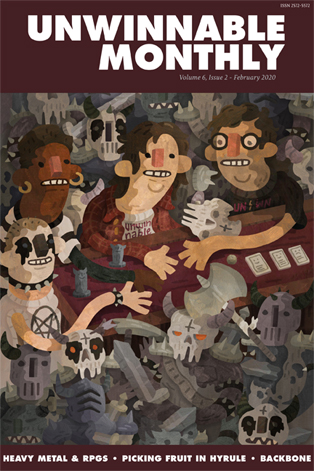 Back when I was in middle school, my best friend and I would spend hours playing NFL Quarterback Club ‘96 on the Sega Genesis. I’d take my Green Bay Packers against his Denver Broncos (a match-up that achieved maximum tension when the two teams faced off in Super Bowl XXXII). For a further sign of the times that will show my age, we’d turn on the game’s Power Shuck mode, which turned tackles into a button-mashing contest (though we believed it actually enabled extra brutal skull-shaking tackles). This was before public pressure forced the NFL to care about head injuries, when back-breaking and neck-snapping hits were celebrated, rather than cause to recoil in horror.

The rivalry we had playing that game is one of my favorite gaming memories. However, this piece of my childhood also feels like an anachronism in retrospect. It was a byproduct of an era where everything had to be “extreme,” even simulation-based sports games where over-the-top aggression conflicted with realism. It makes me sound old when I talk about it now, like remembering when you could smoke on prime time TV, or when it was discovered that lead paint is bad for your health. So, if overly violent football games feel outdated now, what does that tell us about the future of the sport?

This is something that’s been on my mind given the NFL’s increased emphasis on player safety (something it has been communicating through relentless PR and ad campaigns during games) and discourse around whether parents will let their kids play football, given what we know now about the degenerative brain disorder chronic traumatic encephalopathy (CTE). It’s too much to say that the decline in arcade football games was the canary in a coal mine that could have predicted a shift in the public’s attitude toward contact football, but looking back, we can draw some connections. 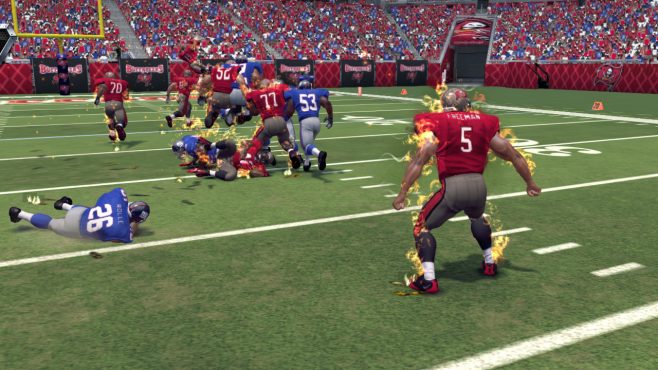 When we ask ourselves how we reached this point and why it took so long for league, for players and for fans to show concern for the long-term physical health of pro football players, it’s worth starting with understanding what our attitudes were like back in the early to mid-90s. Take a look at classic highlight reels from that era (or any previous decade) and it’s not hard to spot devastating hits that would be flagged as penalties today. Picture a person running full-speed, flipping in the air and landing on their skull. This would have been hailed as a solid play, lest anyone dare let themselves appear soft.

Brutal violence defined football. Some say the game has changed for the worse because we no longer let players play the way we did back then. Setting aside the crassness and distasteful ignorance inherent to uncritically parodying President Trump’s rhetoric for profit, when Minnesota Vikings defensive back Andrew Sendejo sold “Make Football Violent Again” apparel, his point was understandable even if it wasn’t something we should want to support. For what it’s worth, the high-speed collisions inherent to the sport are entertaining, as long as you don’t care about consequences.

Sendejo’s spirit would have fit in well back when my friend and I were playing NFL Quarterback Club ‘96, gleefully leveling one another’s players after the whistle had blown, competing for the most low-stakes of bragging rights. Like other kids and fans at the time, we marveled at star defenders who could blast opposing players straight into outer space and players who prided themselves on the ability to take those hits (former Broncos quarterback John Elway epitomized this, and former Packers quarterback Brett Favre famously became addicted to prescription painkillers for a reason).

The fact that “x-treme” brutality had seeped into football sims was a sign of the times. In the original John Madden Football ‘92, injured players would get carried away in an ambulance that could run over other players while it drove directly on the field. In Tecmo Super Bowl, players returning from an injury received an animated cinematic where they cheerily walked away from the hospital with a smile (and, possibly, some unseen brain damage). Then, of course, NFL Blitz blew everything wide open, building an entire game around cartoonishly jacked-up players demolishing each other. 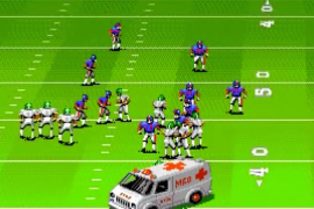 By the time the NFL Blitz franchise fizzled in the early 2000s, one could cite the fact that its arcade-style mechanics had simply run their course. The formula had arguably grown stale and couldn’t compare to the (at the time) unparalleled realism that NFL 2K (RIP) and Madden were able to offer on new consoles like the Dreamcast and PlayStation 2. That would be fair enough too. While NFL Blitz was the antidote to overly complex football games, it didn’t exactly have the depth to sustain interest.

It’s possible there was something else at play too. NBA Jam, Midway’s generation-defining arcade basketball series that preceded NFL Blitz, has since seen a few different reboots and some iterations under different titles like NBA Hangtime. NFL Blitz never saw a similar nostalgic return to its roots. The NBA, driven by star power with big personalities, can be entertaining even without actual violence, so its backboard-breaking and net-incinerating animations accentuate the spectacle that makes basketball great, rather than glorify the long-term harm of playing pro football.

If NBA Jam were re-released in any format right now, there’s a sizable contingent of fans that would lose their minds; hell, there’s a reason why the story around that game offered enough material for an entire book. Try releasing an arcade-style football game where you could brutalize another player with what look like tree trunks for limbs, and that response would likely be much more muted. It simply hasn’t aged well, and set next to headlines around efforts to make football safer, it would come across tone-deaf.

By no means is this intended to call NFL Blitz problematic. The decline of the attitude that series embodied, however, just might track with a decline in people’s appetite for literally brain-rattling tackles. It’s been said that the future of football might more resemble “basketball on grass,” evolving into a sport where speed and agility matter more than sheer aggression. If the past can help predict the future, those prognostications might be more accurate than most of us realize, and that change might come sooner than we expect. The alternative is likely leaving the sport to languish in the halls of history, next to the neglected Blitz machines in a landfill.