I have fallen into some deep holes with Don’t Starve and its multiplayer expansion, Don’t Starve Together. In some ways, it’s my ideal game: cute, goth, open world, lots of crafting and totally sick monsters. Like the aesthetic, most characters are cute goths: Wilson, a scientist yearning for forbidden knowledge; Maxwell, a demon torturing all the other players; Wendy, a.k.a. “The Bereaved,” a girl haunted by the ghost of her sister. But my one true avatar is a goth pyromaniac with an infinitely durable lighter, whose sanity is restored by nearness to flames: Willow.

Willow’s Peter Pan collar and black pigtails give her an adorably morbid look completed by large, blank eyes. Her motto is “Things are so much prettier when they burn.” When her sanity depletes, she starts setting fires.

The sanity meter is one of Don’t Starve’s most interesting mechanics. To survive, characters need to stay healthy and fed – two typical measures of mortality in videogames and real life – but they also need to stay sane. If you get attacked by a mob of armored cave spiders and can’t fend them off, you die. If you starve, you die. If you lose your mind, you die. It’s permadeath.

Sanity decreases by spending too long in darkness, getting rained on, eating bad food, gravedigging, picking evil flowers, drinking coffee or reading (I know, right?). Characters’ vision gets shaky. They hear voices. Shadowy figures begin to emerge from the periphery. If the character’s sanity falls below fifteen percent, these shadows can actually kill them.

Something about the sanity meter calms me down, though. In a way, it feels like real life. My sanity doesn’t deplete in literal darkness – I’m a goth – but the current state of the world is almost nothing but darkness. Like many others, I feel my sanity depleting every time I check social media, read the news or go outside. 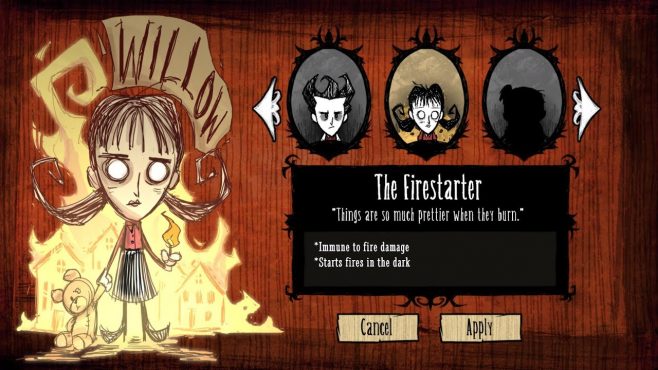 In February 2017, I went to see my doctor because I’d been having panic attacks. This wasn’t a new experience for me, but they’d been happening more frequently and becoming less manageable. My doctor, a middle-aged man who practiced on Manhattan’s Upper West Side, said that he’d seen more people about anxiety disorders since the 2016 election than ever before in such a short span of time. Not surprising.

Mental health is chemical – certainly mine would differ if I had different genealogy – but outside factors nevertheless make me feel like I’m losing my mind. Rather, that my mind is being taken away from me. I know this comparison to the Don’t Starve sanity meter is inadequate – as anything pop cultural struggles to compare to real distress and disenfranchisement – but Don’t Starve, at least, understands sanity as a critical aspect of survival.

Characters’ coping mechanisms differ, but many feel familiar. All gain sanity by eating, sleeping and wearing fancy clothes (top hats and floral crowns), the latter of which seems an appropriate metaphor for some definitions of self-care. But individual characters also gain sanity by doing what they love: a surfer by surfing, a chef by cooking in a crockpot. A librarian loses sanity by creating books – to which all writers will doubtless relate. Willow, of course, gains sanity by nearness to flames.

I’m not a pyromaniac (though I may have written about one before), but I do love fire. It creates heat and light, destroys letters from exes, allows for the olfactory pleasures of candles and incense, and, honestly, just looks cool. Willow, with her wilderness Wednesday Addams vibe and indestructible lighter, might not be thinking about the above uses when she’s building campfires to survive a winter night, but fire’s more frivolous purposes nevertheless harness elemental power.

Fire starting is a way of gaining control. Willow can’t control the fact that a demon dropped her in this wilderness, or that she gets attacked by hounds every three to 13 days. But with the right ingredients, she can make a pile of sticks combust and stay warm all night.

I can’t control most of what goes on in the world. But I can donate to the ACLU, the New York Immigration Coalition or Planned Parenthood. This is a drop in a seemingly never-ending bucket, and not as viscerally satisfying as setting sticks on fire. But it’s something. I think Willow would get it.

Deirdre Coyle is a goth living in Brooklyn. Find her at deirdrecoyle.comor on Twitter @deirdrekoala.