The Favourite, the latest from director Yorgos Lanthimos, is a period film set in the early 18th century and follows a particularly lascivious court intrigue between Queen Anne of Great Britain during the last few, gout-stricken years of her reign and a pair of cousins fighting over her affection. It is almost entirely set in the Queen’s palace: in her bedchambers, her court and the maze-like passages, both known and kept secret, that connect her sprawling estate.

The palace’s gaudy interior design can’t help but draw the eye: its walls are mostly hidden underneath elaborate molding and glittering ornamentation or draped under layers of painted tapestries like a nightmarishly cluttered salon. Massive columns frame tall windows which look out onto vast stretches of meticulously groomed gardens. It’s a lot. Lanthimos, in crafting his set in such extremes, nods at the historical excesses of European royalty.

As much as the palace is a baroque monument to excess, it is equally a symbol of the way corruption and rot tend to lie at the centers of power. Interiors meant to inspire obedience and awe through rococo ebullience, instead become gilded prison walls, the rulers held within are hidden in shadows, crawling around in the sickening dampness, screaming at their hapless footmen and slowly losing their minds. This architectural inversion comes across through the film’s claustrophobic framing of these chambers and halls, and the way they are lit. Whether day or night, the interiors of the palace are dim, half-lit spaces, barely touched by the grey English sunlight. The word dreary aptly describes the majority of the mise-en-scène containing the film’s character drama; you can almost smell the mold creeping through the drapery hanging over the queen’s bed, her illness encompassing everything around her, spreading irrevocably to the walls and foundation. 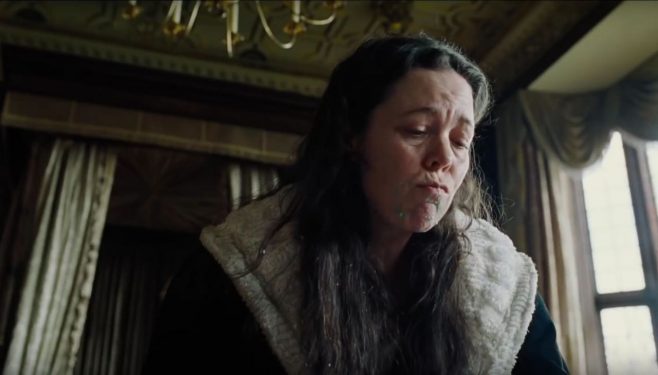 These motifs of rotting architecture and unhinged rulers also show up in the 2015 videogame, Bloodborne. The game takes place in the fictional town of Yarnham, a Lovecraft-inspired haunted cityscape: its rain-slicked cobblestone streets punctuated by stacks of spindly gothic towers sprouting turrets, clocks and mansard roofs in chaotic and unpredictable arrangements. The group responsible for all this outsized architecture is called the Healing Church, an organization obsessed with attaining cosmic knowledge and using it to bridge the gap between humanity and the gods. Of course, it’s because of this arcane quest that the town is in the decrepit state you find it in, the former church leadership reduced to bloodthirsty, mindless beasts.

Like The Favourite, Bloodborne tells a story through contrasts. Formerly grand gothic structures, filled with countless statues, candelabras, jewels and treasure, become charnel houses, the same regal trappings now hellish decoration. What might have looked pristine by day, when glimpsed under the moonlight, lit by fluttering candles or the flames of a raving townsman’s torch, takes on a sinister and foreboding appearance. The desperate dreams and plans hatched by its rulers transform and twist Yarnham, its nightmare architecture collateral of their folly.

In The Favourite, Queen Anne passes a decree to heavily tax her subjects in order to pay for a war with France without a hint of comprehension for the real-life consequences of either action. She allows her nobles and courtiers to whisper in her ear and prod her in their own self-interested directions, without concern for how that might shape the world outside the walls of her palace. So – at least in the morally balanced world of storytelling – we see justice served, the evil that she exports from her throne or directs from her sickbed makes its way back into her body and her palace by association. It blankets everything around her in suffocating darkness, punctured only by the lamps used by her cunning handmaids to light their nightly routes through the slumbering palace as they attempt to seduce small kernels of power away from their stricken Queen. 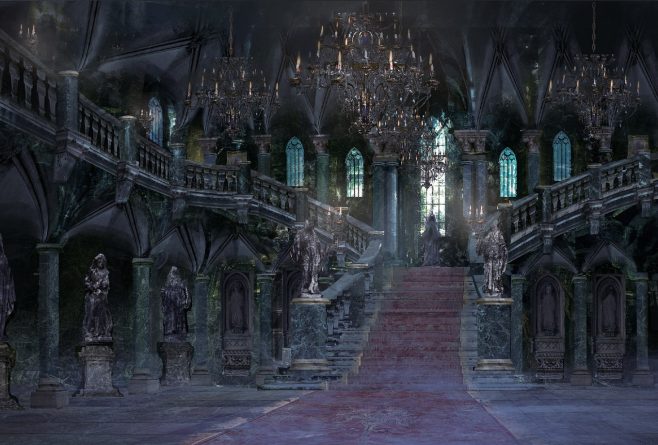 One location in Bloodborne particularly echoes The Favourite’s depiction of decaying and distorted royalty. Castle Cainhurst, tucked away in a snow-covered valley a carriage-ride away from Yharnam proper was once the dominion of a group of regal vampires. The player finds it mostly abandoned. Its residents, long ago murdered, now haunt its halls as ghosts. One of its rooms, off to the side, holds tables stacked with rotting food and silver plates and cutlery. Floating nearby, the castle’s ghosts moan and lash out at the player, frustrated surely, that they lack the corporeality to enjoy any of this splendor. Here, the fruits of excess and plenty are denied to those who once carelessly enjoyed it and who so desperately want it back. In a scene in The Favourite, Queen Anne gorges on cake, impudently stuffing it into her mouth until she becomes sick and vomits it up into a nearby urn, evidently designed for the purpose. Once recovered, she immediately sets about eating the cake again. Both of these moments speak to the self-destructive, stubborn sickness behind the desire to hoard wealth and power. Stuck behind walls, within the seemingly endless purgatory of fiat rule by right of birth, the powerful hoard and waste resources on their own unhappiness, trying to fill a bottomless hole, littering the floor with all the trash produced in the attempt.

Early in The Favourite, Queen Anne offers the Duchess of Marlborough a giant new palace as a gift, even as the war with the French threatens to deplete the royal purse. Hilariously, and pitifully, she doesn’t seem to be at all aware that the war is still ongoing, still an existential threat to Britain. In the eyes of the Queen, her reign is infinite, her resources limitless; even as her body crumbles beneath her, even as she sends men to die in battle, even as her closest confidants conspire against her.

The twisted, impossibly stacked towers of Bloodborne’s Yharnam point to a similarly blinkered will to build accumulate, even as the dream reveals itself to be a nightmare. For Yarnham’s Healing Church, the warning signs were readily present, all fastidiously ignored by an elite committed to chasing after power and enlightenment. Alongside The Favourite’s decomposing royal grounds, Bloodborne’s thorny vistas and haunted castles serve as visual critique of this kind of wanton avarice, and warn of the inevitable downfall of those with unconstrained power and privilege; those who build, even as the foundations beneath them wither and rot, who scratch vainly at the heavens but are doomed to return endlessly to the dirt.