Late yesterday afternoon, a shadow passed over a pile of books beneath my side table. I couldn’t figure out what object created the shadow, or what light source it had been blocking. I tried and failed to recreate the shadow’s movement. I told myself it could have been the shadow of a bird flying at a supremely weird angle in the narrow alley outside my window, but I didn’t actually believe myself.

This didn’t worry me too much. The surreal has always felt natural to me. If anything, it makes me comfortable.

This is why I so desperately want to be friends with Jesse Faden, the protagonist of Control. Jesse finds herself in The Oldest House, an internally labyrinthine, externally Brutalist skyscraper which houses the Federal Bureau of Control. A secret governmental organization, the FBC devotes itself to the study and containment of paranatural phenomena. Almost as soon as Jesse finds herself within the organization, she becomes its new Director.

Early on, former Director Zachariah Trench states that “Magical thinking is a requirement for survival” in the Bureau. Yes, this does apply to the paranatural objects and enemies encountered within a surreal skyscraper, but this also applies to my entire life.

Survival through magical thinking applies not only to the unidentified shadows moving across my walls, but also to the unidentified shadows moving across my brain – and I don’t necessarily mean this in a depressive way. It applies to the time I let the cat out of my bedroom, shut the door and watched him emerge from my closet five minutes later. It applies to the time I found plucked flowers arranged in a perfect circle deep in the woods behind my childhood home. To me, these sorts of instances don’t feel like reality glitching. They feel like reality adding up to what I’ve always expected.
Wandering the pathways of The Oldest House, Jesse says, “Everything here feels crazy, weird, but it feels right. Like how the world should be. I’m in an infinite building leading to different dimensions and I never want to leave. Even with all the horror, I’m happy. It feels sane. Or just the right kind of insane.” I wouldn’t want to leave, either. 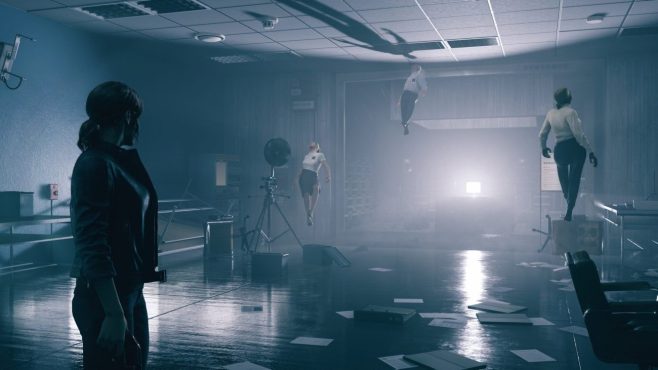 It always puzzles me, in fantasy narratives, when protagonists spend a long time acting confused or disbelieving about the sudden influx of the fantastic. Because honestly, why would this surprise them at all? “It’s a fantasy for many of us to stumble out of our day-to-day lives into an unearthly new realm, where mundane laws and rules of physics (and reality) simply don’t apply,” Alexis Ong writes in our Best Games of 2019 roundup. This is certainly true for those of us who prefer the immersive, escapist fantasy worlds of games. So why don’t more characters in science-fiction and fantasy react with serene understanding and expectation? Why fight a new reality if it’s offering you exponentially more interesting abilities and lifestyle choices? (If you have telekinetic powers, I’m interpreting the decision to throw office supplies against unassuming walls as a lifestyle choice, one which I obviously made while playing Control.)

Jesse Faden – a woman after my own heart – does react with (relatively) serene understanding. She takes everything in stride. She walks into a federal bureau and becomes its boss. Jesse “doesn’t have to learn how to use power,” writes Gita Jackson. “She proves her dominion over it by her absolute, unwavering command.” Jesse floats off the fucking ground and uses her mind to throw shit at her enemies. She’s not even bothered.

There are a lot of reasons I want to be friends with Jesse: her leather jacket, strong eyebrows and telekinetic powers among them. But what I really like about Jesse is her absolute assurance that she’s in the right place; her comfort with the interdimensional shitshow happening all around her. It isn’t only that she’s comfortable with it, she’s (yes, here we go) in control of it. Her reality isn’t glitching, it’s finally adding up.