I like the ocean – mermaids live there and the xenophyophore-sprinkled Marianas Trench is goth as hell. But chatting with mermaids (or xenophyophores) would still involve going outside and that’s always been a tough sell for me.

It’s July now, which means my cooler (if less goth) friends are filling my Instagram feed with their beautiful faces in beachy landscapes, their windswept hair fanning over beer cans, waves rollicking in the background, casual laughter implied. One such beautiful, beach-loving friend is Spyro the Dragon, a purple winged reptile I haven’t heard from in a few years, but who’s slated to return in September 2018.

I met Spyro in the seventh grade when I helped him rescue the Dragon Realms from Gnasty Gnorc, a shitty orc-gnome, in Spyro’s titular first game. After defeating Gnasty, Spyro and dragonfly pal Sparx decide to vacation in a water park/beach realm, Dragon Shores, in Spyro 2: Ripto’s Rage. En route to the waterfront, Spyro and Sparx are pulled through an alternate portal into the land of Avalar, where they’re greeted by a cluster of cute magical creatures looking for dragonian help in defeating an evil, reddish, bushy-eyebrowed overlord (sound familiar?). Vacation thwarted, Spyro can’t get to Dragon Shores until he helps these lovable nerds – and if he could, there wouldn’t be a game.

I played Spyro 2: Ripto’s Rage at the beach – not Dragon Shores, but the shores of Lido Key, Florida. The ocean crashed outside the beachside condo where I vacationed with my mother and my friend, Lucy. I’d packed my PlayStation, which I connected to the TV in the room farthest from the water. 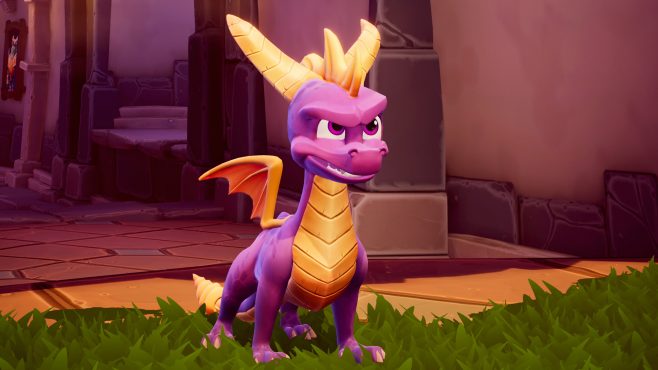 Lucy and I spent the week playing Spyro. We were both very invested in the story, but luckily for me (an only child who dislikes sharing), Lucy didn’t actually like “driving” the controller; she preferred to co-direct Spyro’s and my movements from a safe distance. So I played while she watched and co-directed, and my mom tried to get us to go outside. No thanks!

But as much as I avoided the perils of sunscreen, physical reality and children other than Lucy, I relished the in-game landscapes. Avalar boasted underwater kingdoms, enchanted forests, grassy plateaus and mountainous tundra. Its fauna involved life-extending butterflies, money-hoarding bears and Snail Elephants; the nonsensical flora included a seed that became a flytrap that bestowed a rubber duck, which Spyro exchanges for a turnip in order to complete a quest.

It never struck me as counterintuitive that I enjoyed diving around the waters of Aquaria Towers while sitting several hundred feet away from the Gulf of Mexico in physical reality. While killing the enemies of seahorses as Spyro, my earthly body remained comfortable, eating Little Debbie Fudge Rounds in an air-conditioned condo. As Spyro, I was a much better swimmer. As Spyro, I could resurrect if a sea beast (or stingray) killed me. As Spyro, I could fly. I’ve already established that flying with dragons is a lifelong goal.

After nightfall, when the sun was down and the more obnoxious swimmers (other children) had left, I did walk out to the Floridian beach, whispering to mermaids while looking for sand dollars. Twilight always felt like a safe time to be outside, a liminal space when “reality” gained elasticity. Those dusk memories hold, but even now, I don’t regret having spent the bulk of that week charging around Avalar instead of Lido Key.

After defeating the final boss, Spyro and Sparx get to take their vacation. In the epilogue, they appear to have fun playing Dragon Shores’ mini-games: riding roller coasters, breathing fire at unsuspecting ducks and boating through a love tunnel.

I’d still rather be inside. If I’m not playing videogames, I’m reading; even if the books I’m reading are about the Marianas Trench, I’d prefer to learn about its mysteries from my temperature controlled apartment.

All that said, if Spyro invited me to Dragon Shores – or if a mermaid invited me back to Lido Key to hang out – I would totally go.

The New Godzilla Trailer is Awesome and Sublime