Take the visual and aural aesthetics of the ‘80s and ‘90s; chop, mince and puree them; and the result will be the internet subculture called vaporwave. As a music genre, it’s distinct for taking corporate lounge music—or elevator music—and distorting it into a dissonant yet unnaturally slick tune. And as a visual movement, it’s essentially a mish-mash of glitch art, early internet design, roman busts, garish colors and of course, a sprinkle of the Japanese language to give it an otherworldly vibe. If that sounds like a whole lot of horseshit to you, well…the internet is weird. You already know that.

Capturing the zeitgeist of the movement is Macintosh Plus, a musician who crafted the vaporwave anthem, “ “??????420 / ????????”. By chopping up and dragging Diana Ross’ “It’s Your Move” to its limits, it turns the original into a sedative earworm that gradually slithers into your head. 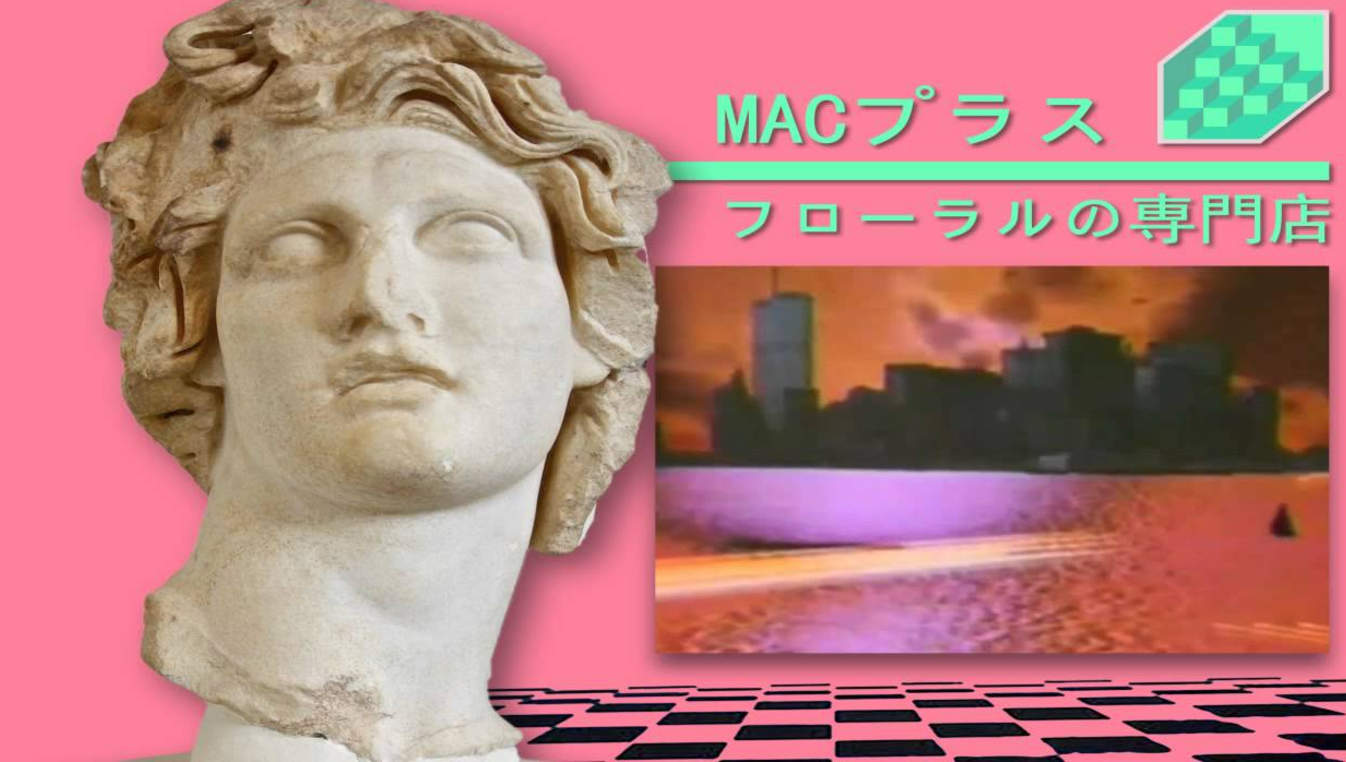 But despite its less-than-scholarly beginnings, I find vaporwave to be an endlessly fascinating movement. It rose from an obsession with said era’s consumer culture; yet, because it so liberally appropriates corporate icons and imagery, it’s also perceived as an anti-capitalist movement. To some fans, it’s the kind of music that loops in the background of a shimmering shopping mall in a dystopian, possibly cyberpunk universe, a future in which capitalism has run amok. On the other hand, it also genuinely appears to be fueled by nostalgia, a longing for the earlier, uncontaminated days of the internet and the ‘90s aesthetics, which includes the embracing of consumerist cultural icons. Like many things from the internet, this dichotomy baffles me, and I’m guessing it may be why some people would write off the entire thing as some hipster fad.

Nonetheless, vaporwave still exists in some capacity, despite numerous declarations that the movement is dead with all nails in its coffin. One example is its occasional resurgence in videogames. Broken Reality, a puzzle-adventure title set in a disquietingly bright and gaudy virtual reality, embodies the vaporwave aesthetic, but it’s decidedly anti-capitalist.

You arrive at a virtual waiting room, ready to sign up for access to the internet and other digital services with a megacorporation called NATEM. A faceless customer service rep greets you in Japanese—but hey, you have access to English subtitles!—and then you’re free to wander this virtual world. Like the internet in its earliest days, this universe is engulfed by glitch art, GIFs, pop-up ads, malware and ugly internet banners of all sorts. What’s different though, is that Broken Reality has imported a feature outside of the era’s internet: social media currency. To upgrade your starter account to a premium one, you have to accumulate enough “likes” and internet popularity. Only then do you get to meet a very important man named ADMIN—probably an internet celebrity of some sort.

Accumulating these likes isn’t difficult, but it’s addictive. One of the first tools you’ve given to interact with this world is a thumbs-up pointer called a Liker, which you can use to collect “likes”. With it, you can click on banner ads repeatedly until your “Like” counter explodes. You can also hoard more “likes” by taking artistic photos of the analog sky with a camera, or by becoming a shopping virtuoso, honing your skill in buying as many bullshit as possible while you accrue a mountain of debt. Oh, and quests—what’s an adventure game without quests? You got to meet famous people, too!

This system of gathering as much social media currency as possible, only for a vague sense of reward, reminds me of the pervasiveness numbness that comes with consumerism. Buying has given us a short but instantaneous burst of gratification; we shop to starve off our boredom or anxiety. In Broken Reality, the megacorporation NATEM stretches this addiction to its extreme, turning consumption into a game of skill and reflexes. The very idea of it is ludicrous—and it’s played for laughs in the game. But it’s also funny because it hits distressingly close to reality.

Broken Reality isn’t fun, but this isn’t pegged to any design flaw. Spending close to an hour in an environment oversaturated with colors gave me a slight headache. It’s just uncomfortable enough to remind you that this environment and all its activities aren’t regular happenings netizens should be partaking in. Coupled with its use of vaporwave art, visuals and music—the cool lounge music that beseech you to chill the fuck out and not think too much about anything else—this makes Broken Reality a quirky and unsettling experience.

I do wish to see more of Broken Reality and what more it has to say about its rejection of capitalism. The demo I’ve played can get a tad predictable at times, but perhaps more will be revealed in its complete version. Check it out on Kickstarter, and give the developers your support if you wish to see this developed into a full-fledged title.