You’ll forgive me: while I’d fully planned on (finally) writing a review of the third volume of The Girl from the Other Side, that will have to wait for another week. I don’t have the inspiration.

It’s not that this latest volume of Nagabe’s masterpiece doesn’t offer plenty to discuss; it’s possibly the most effective (and so affecting) installment yet. Nor can I blame this critical inertia on the holiday season. I’m not so thrilled that I simply don’t have the time to sit down and engage with art in a substantial way.

Quite the contrary. For the last week I’ve been fighting feelings of deep doubt, the kind of unsettling angst – 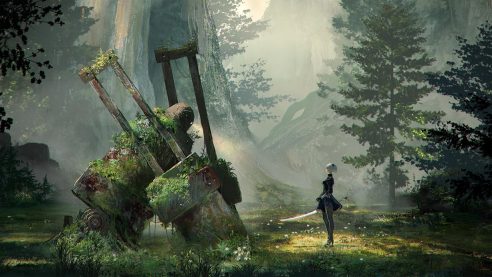 worming in from the edges of and underneath the foundation of normal experience – I haven’t had much truck with since adolescence. The kind of angst that renders each minute of every day subtly less pleasant for reasons I cannot quite explain until the moment it announces itself in its fullness. For the last two days I’ve been a volatile mess always on the edge of another blubbering breakdown, fighting back so many of the deep-seated fears I thought I’d found a handle on earlier this year, if not a decade ago.

Again, though, none of this can be blamed on the melancholia that always accompanies my holidays. This isn’t the bittersweet sensation that comes when the presence of long-absent friends and family reminds me both that I am loved and that time is passing at an absurd rate. No, the blame for this resurgence of depression can be lain squarely at the feet of NieR:Automata, a work so mammoth that I don’t feel comfortable sparing it only these few hundred words – better an entire book! – yet so powerful, so immediate, so much a part of what I’m dealing with in this moment that I couldn’t hope to ignore it in favor of anything else.

It’s not much a game, mechanically; while the combat comes courtesy of the geniuses at Platinum, it’s a watered-down version of what you might expect from genre-definers like Bayonetta that often interferes with the game’s primary mission of telling a story. That story, though, is something else entirely, a deeply felt reflection on how 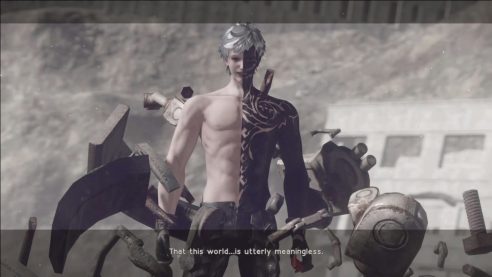 people react when they lose their innocence and wake up to the fact that the world is a kind of perpetual nightmare, how animals built to construct meaning out of everything lash out when they realize that the carefully constructed fictions of “meaning” and “purpose” are just tightropes thrown up across the yawning emptiness that underlies everything, how systems built to spare us these same horrors by providing direction end up become eternally recurring loops that thresh everything they touch. It’s a story that absolutely hates videogames for their tendency to instill a callous, self-centered ethos in their audience and makes this clear (a theme not uncommon in director Yoko Taro’s oeuvre), and yet believes in their ability to move us beyond these delusions to something grander.

It’s a story about isolation, about hopelessness, about despair as a sickness unto death, a fable about how humanity’s best, most nurturing desires are rooted inextricably in our most competitive, destructive instincts and about how there may never be a resolution to this paradox. That the best we can hope for is holding this paradox at bay one more day. It’s a science-fiction horror show as deeply rooted in Continental philosophy (it’s no fluke of translation or simple amusement that many of the bosses and supporting casts are named after major philosophers) as it is in Japanese popculture touchstones such as Xenogears and Neon Genesis Evangelion and the works of Tsutomu Niheii that understand how all the best tales are, at heart, horror stories of scope and scale and time. It’s depressing in the extreme, and yet it’s not sophomoric or ironic in this approach. There’s nothing “edgy” about the overriding apocalyptic tone or the endless carnage and narrative hell these characters are dragged through. This is not torture porn, meant to shock our sensitivities. Yuko Taro is too playful and too honest to narrow his own sensibilities like that: he’s not here to make a point so much as to investigate what, exactly, is happening to these characters he’s clearly so fascinated by.

NieR: Automata, is, in a word, expansive. It possesses that rarest artistic trait, that sweeping understanding of human nature and philosophy that makes it easy to compare to novels like The Brothers Karamazov or The Recognitions and to films like Stalkers as to classic narrative-driven videogames like Planescape: Torment and Shin Megami Tensei Nocturne. It’s an impossible tangle I certainly haven’t sorted out yet and most likely never will. Like 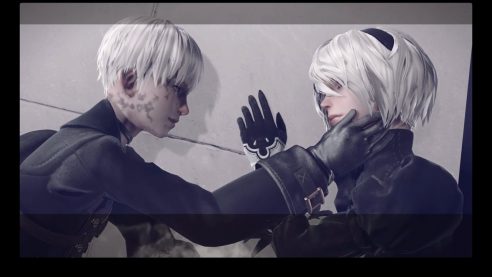 the best of all art, it isn’t transcendental ; transcendence is about rising above the dross, about escaping all the horrors of an embodied world, impossible in this world through by anything but mind blasting drugs and euphorias. No, like the best of all art, Automata operates at the level of the subconscious, worming into the mind through ambiguous association, uncertain suggestions, aesthetic and narrative choices that don’t make an easily summarized sense but which feel deeply, intrinsically right, right in a way totally unique to its own aesthetic rules. Like the best of all art it possess heft and weight I will soon forgot was a burden left me by a stranger to mistake for a burden intrinsic to me. I don’t mind that it’s left me doubting deeply held certainties, if the recollection of certain scenes and dialogue send me off on a crying jag that could lasts nearly an hour. I don’t care that it’s unsettled feelings of purpose that’d felt deeply rooted for years. Art SHOULD unsettle.