In the second of the WicDiv one-shot specials, we get to see exactly what happens when a god decides not to go gentle into that good night, and it ain’t pretty.

Though a few small flashbacks let us get to know 455’s Dionysus (going by the Roman name of Bacchus, natch), that cycle’s Lucifer is the last of the Pantheon left alive at the beginning of the story—and he aims to keep it that way. It’s a clever move by Gillen, since some members of the modern timeline’s Pantheon have been vocal about finding a way to survive past two years. Now we see what happens when a god tries. At least, we see what happened then—Laura’s presence has thrown more than a few wrenches into the works in the 21st century’s cycle, so all bets may be off.

Interestingly, Lucifer’s raging against the dying of the light serves to highlight his wonderfully human frailty, and makes us see Ananke from a new perspective, too. Who wouldn’t rage in the face of certain death? Is there anyone more susceptible to anxiety over a complete lack of control than a god? What if a god’s “natural death” is a fate more horrifying than being untimely murdered?

Guest artist André Lima Araújo is given ample time to shine in the issue, his detailed linework letting us see the craggy imperfections of character and setting alike. He also delivers a particularly horrifying page turn that I’ll avoid spoiling since it was one of the few times in recent memory a comic book actually made my jaw drop, and if I had to suffer the shock of it, then so do you! (Seriously, though, if gore is not your thing you might want to skip this issue.)

Matt Wilson’s colors are great as always, and he does particularly well coloring the Roman skies during the invasion of the Vandals, skillfully alternating between blazing oranges and chilly blues. Indeed, in one early scene with Lucifer looking over his domain, the sky seems to be alight even before Rome begins to burn.

I’m a big fan of these one-off issues, and I hope Gillen can find room for at least one more. They afford us the opportunity to see how another era’s incarnations of the Pantheon are similar to or different from the ones we’ve come to know and love (or hate) in the main storyline, and it’s neat to put together how they relate to the modern timeline, especially when considering Ananke’s presence as a throughline. Perhaps past really is prologue. Then again, with Ananke now dead, perhaps not. 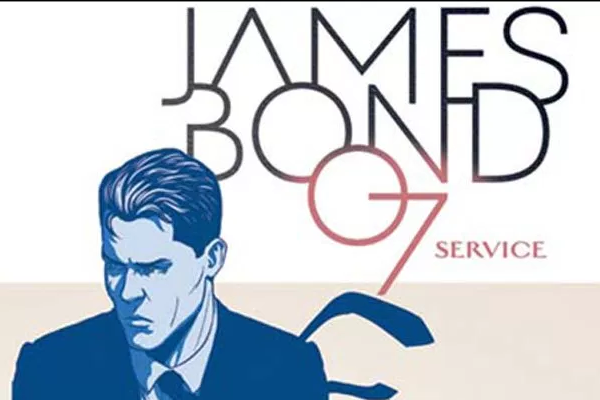 Kieron Gillen’s one shot, James Bond: Service is a brilliant little romp through post Warren Ellis world of James Bond. It’s focused, lithe, and immensely readable. Antonio Fuso’s art is stark, simple, and has the feel of an old comic strip. All in all, there’s very little to dislike here.

The main strength of Service is that it gets to the point without dallying. It doesn’t take long for something to blow up and for Bond to get himself into a bit of a pickle. One of my main complaints through the post Ellis era is that the stories seem to drag or go to outlandish lengths. Bond doesn’t punch a shark, he doesn’t go on a weird skiing trip. Bond just busts down a door and it blows up in his face.

In many ways, it reminds me of Skyfall. Bond himself laments the lack of spy cars and bikini girls but that’s for the best. Bond was never at his best when he was acting out Fleming’s lustful or high flying fantasies. It’s why Casino Royale ranks as one of the best Bond films and books, the action is tightly controlled and directed.

While Gillen doesn’t write the platonic ideal of Bond stories he doesn’t have to either. Service is a narrow focus so narrow that it doesn’t allow itself a car chase or a gambling scene. In fact, 90% of the book takes place in what feels like the span of five hours. It could have been drawn out into six issues but instead it’s a breezy read because there’s no useless cliffhangers, just the next page.

Narratively, my main complaint is that it feels a bit too pleased with its own knowledge. While not a love letter to the old war days more than a passing reference is made to the glory of the “service” during and after World War II. That cuts both ways, the villains have a dogmatic adherence to the memories of the war but the story doesn’t want you to forget that the Brits cracked Enigma at Bletchley Park. The beginning and finale takes place at Imperial War Museum for heaven’s sake.

Fuso also does a great job. I like the geometric abstraction of the characters. Everything has a big of a surreal look to it and that’s fine by me. In fact, the austere investigation scene with no dialogue is one of my favorites. It’s lovely for a story to be told visually once in a while. A lot of books are *over* written but not this one. Bond investigates a suspect and almost doesn’t utter a single word while doing it until a stand in for Mrs. Hudson arrives. Here, my only problem is that it’s too easy to differentiate the manly men from the ones the story doesn’t want you to like by their jowls. Got jowls? You’re an asshole.

Overall, James Bond: Service is a quick read that’s not subtle on the political overtones. Its not one to curl up by the fireplace with but that’s okay. They don’t all have to be slow boilers and it was a nice change of pace for Bond to get a case he could solve in a day without potentially world altering consequences. There’s no nukes, Russians, or robots. Just some right-wing nuts trying to assassinate a political dolt.