I’m not sure how Ian Fleming would have felt about Ellis and Masters. A part of me would like to think that he’d be proud of the work they’ve done. Ellis and Masters have relished in the Bond of grit and violence.

James Bond #11 is not shy about what type grit and violence it is either. Bond kills easily, avenging slights, revenging wounds, and relishes in the car chase. As I’ve said before, he’s Sterling Archer with a filter. Strike all the whoo-hoos and danger zones and H. Jon Benjamin would find himself right at home here when he’s dishing it out.

But he’s also a subtle Bond. Ellis and Masters tread a line between restraint and indulgence, innuendo and graphic exploration. When Moneypenny and M are trapped in a “how will the escape?” cliffhanger Ellis back pedals to a previously innocuous panel and explores the sleight of hand that is all but apparent all along.

Eidolon is, perhaps, one of the best Bond storylines of all time. It’s a small story, tightly scripted, and only takes place over a few days. There’s no globetrotting or crazy gadgets. Instead, it’s succinct narrative where the sex is between panels but the violence is on full display. Plus, there’s an amazing car chase. 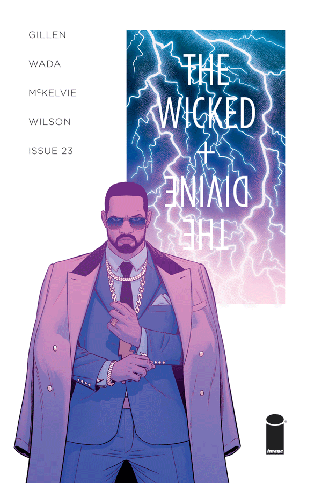 WicDiv is back with a new arc after a two-month hiatus, minus a September one-shot featuring some rather famous versions of the 1831 Pantheon – do pick it up, by the way, if you’re a fan of Romantic and Gothic literature and/or the idea of superb art being provided by Stephanie Hans.

While issue #23 is a return to the world of the Pantheon after the spectacular and shocking death of Ananke, it’s not quite a return to form. Rather than present a traditional paneled layout, former real-life journalist Kieron Gillen delivers a comic book formatted in the style of a magazine, making himself an in-universe editor and recruiting five other real-life journos to interview five of the gods, with Gillen himself providing in-character answers to the interviewers’ questions.

It’s an idea that produces an incredibly satisfying sense of immersion. Now we readers are inside the world of WicDiv, not only fans of the book, but fans of the gods themselves, clamoring for the brief insights into their inner lives these interviews provide. I was easily reminded of my teenage self, poring over every interview with whichever actor I was obsessing over at the time (teen Sara was a fickle beast), trying to piece together an idea of their true personalities.

Guest artist Kevin Wada provides the magazine’s “photography,” aka several gorgeous watercolor and ink spreads that perfectly compliment the impeccably laid-out text – kudos to issue designer Sergio Serrano on that front. Regular series artist McKelvie and colorist Matthew Wilson make cameos with a brief recap of Ananke’s abduction of Minerva, the staff bio page, and a couple of ads. The tagline for Baal’s fragrance is delightful – please direct your inner voice to read this in a whisper – “capture lightning in a bottle.”

The magazine format also gives in-universe permission to run a previously unpublished interview with dearly departed Luci, conducted at the very beginning of the Morningstar’s ascent to fame. Interestingly, she comes off as more Beiber than Bowie in this early peek into her newly-minted divinity. Hey, even Bowie was just Davy Jones, once upon a time.

This isn’t the first time The Wicked + The Divine has played with format: issue #14 was a favorite from previous experiments, composed entirely of panels used in earlier WicDiv issues, with a couple from Sex Criminals thrown in for good measure. It’s also not the first time the team has played with reader immersion: I mentioned in a previous review that some of us received emails from Dionysus himself, calling us into the final battle with Ananke. Judging from this exemplary magazine-styled issue, I hope it won’t be the last foray into either conceit. 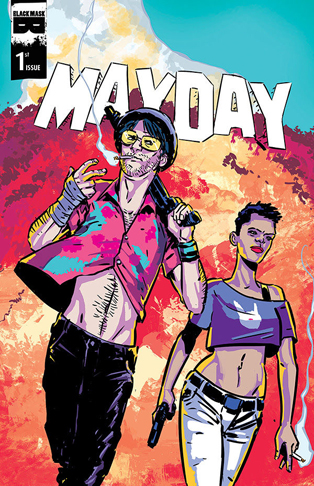 I’m determined to avoid another comics dry period. I’ve been researching some upcoming titles to fill the void after swearing off a few of the major titles, but anything of interest seems to be weeks away from release. Unwinnable’s true superhero, Ian Gonzales, comes to my rescue yet again. Like always, he appears out of nowhere, whispers something to the effect of “new Alex de Campi book” and disappears in a cloud of smoke. Do I hang my head in shame for not knowing Mayday was coming? No, friends, instead I rush to my local comics store and buy it!

On initial perusal through Mayday #1 in the store has me wondering if this here Cold War-era tale would be a spy vs. spy, guns-a-blazing thriller or some of that spiraling madness that Alex de Campi has been known to devolve into (I say that absolutely lovingly, friends.) I was thinking the former, but during said perusal, I spy a splash page of something that can only be described as psychedelic hate fucking. That’s the minute I knew it would be de Campi at her lunatic best.

At a high level, the plot is thus: the FBI and CIA are haggling over a Russian double agent who has intel about spies infiltrating the American government, and this could impact America’s “situation” in Vietnam. The Russian government has it’s own interest in things, because USA vs. Russia. Seems simple, right? Not so, friends. Not so.

Russia sends a few folks to the US to take care of the above-mentioned double agent (and their respective agencies seem to have a pissing contest similar to the one between the FBI and CIA.) For better or worse, the Russian operatives happen to be curious kids, barely in their twenties, who want to experience a taste of Californian lifestyle, circa 1971. They’re invited to a party held by some nefarious hippies (not only are these hippies dirty, they’re also evil!) and a dosed bottle of vodka turns things all twisty.

Throughout her career, writer Alex de Campi has shown she can put a unique, original spin on any type of story, be it secret ops double-crossing spies (Smoke) or gory horror (Grindhouse.) Also, figure into the equation Archie vs. Predator. With Mayday, de Campi may really top herself. Not only is the story a tense page-turner, but she sets a great tone by giving readers a soundtrack to read along to (her decision to include Tony Orlando and Dawn’s “Knock Three Times” is brilliant. You’ll see.)

Artist Tony Parker and colorist Blond bring de Campi’s script to life with cinematic flair. The nighttime psychotronic beach party is beautifully rendered, and almost three dimensional at points. The way Parker and Blond light their scenes is phenomenal, especially their use of car headlights and how they cut through the darkest desert nights like klieg lights.

Mayday is slotted to be a five-issue mini-series (the optimal format!) and de Campi promises more to come from this world she’s creating (possibly two more mini series’.) The action is sure to be swift, due not just to the five-issue limit, but also to de Campi’s nimble direction and Parker’s and Blond’s beautiful cinematography. Fingers crossed that the whole creative team returns for the next saga.

So get in on the ground floor friends, before things get too far gone. But stick around for the whole trip, as things will only be getting started when we step over that line. 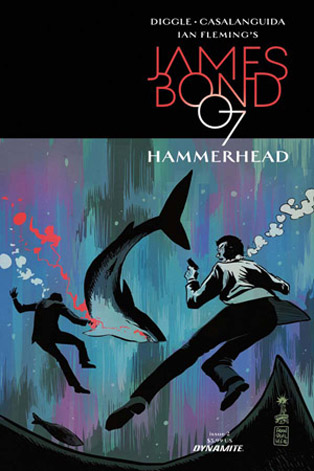 That’s all different in Andy Diggle and Luca Casalanguida’s Hammerhead. Unlike Vargr and Eidolon, Diggle and Casalanguida have taken a direction that feels much more like a film than a novel. Diggle’s Bond feels most like the Bond of Tomorrow Never Dies or The World is Not Enough. He’s polished, debonair, and enjoys the song and dance of spying.

That’s incredibly apparent in Hammerhead #2. Bond is much coyer, something that a character in Eidolon tells us that Bond is not good at. Hammerhead also really digs into its femme fatale, a character that’s all but missing throughout Eidolon and Vargr. Whether those choices pan out remains to be seen.

Diggle isn’t Ellis but James Bond lends itself to this kind of reimagining. Each team should come to the character fresh, choose which elements they like, and run with them. That’s what makes Casalanguida’s art so refreshing. I think that Masters did a marvelous job but suddenly here’s a new team and it still feels like James Bond despite seeming nothing like the other James Bond lurking out there.

Plus, there’s that theory that James Bond is just a codename. Hmmm…

Chris Blythe is also someone to pay attention to. Perhaps the most starkly different thing going on in Hammerhead is the colors. It feels as though Blythe is working with a significantly larger array of colors. Working with Casalanguida’s art, Blythe uses a mix of shadowy, pulpy art and brilliantly detailed moments that would feel at home in Batman.

Bottom line, If you’re a fan of James Bond, the character, the novels, the films, etc then this is a golden age of comics for you. Though it pains me to see Ellis going in a short while, there’s a lot to look forward to in Diggle and Casalanguida’s run.