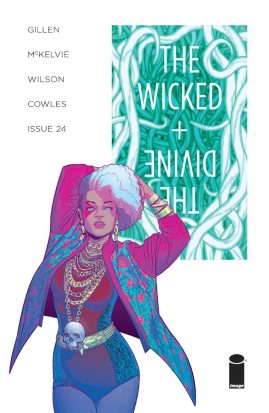 After the stunning in-universe magazine that was issue #23, the WicDiv team eases us back into our regularly scheduled programming with this latest entry. The second chapter of the Imperial Phase arc – the book’s third arc, overall – is an inward-facing focus on Laura, our former audience surrogate who’s now ascended to the Pantheon as the goddess Persephone.

Exactly one year since Laura made first contact with Lucifer and the rest of the gods, our girl is struggling with her newfound divinity. Considering she was almost murdered, dealt with the actual murder of her parents and sister, and then herself murdered Ananke, the god responsible for it all, it’s hardly surprising. She’s spending parties hanging out on building ledges, making out and/or sleeping with the other members of the Pantheon willy-nilly, and speeding through the streets of London on her motorcycle like a bat out of hell (because she’s an Underworld god, see?). Referring to herself several times this issue as “The Destroyer,” she mostly seems hell bent (I’m so sorry) on slowly destroying herself.

Fortunately, she’s got Minerva, goddess of wisdom, to point that out. Unfortunately, M.’s advice falls on deaf ears. I’m glad these two had some one-on-one time since, like Laura, Minerva also lost her family to Ananke’s evil machinations. Shared tragedies can create deep bonds between people, and I’m eager to see what develops as these two characters interact more.

Though it’s no small feat after Kevin Wada’s glorious turn with issue #23, the art shines in this issue, per usual. A New Year’s Eve party and the return to Woden’s compound give colorist Matt Wilson ample chance to dazzle between a spectacular fireworks display and the reappearance of Laura’s glowing tentacles, and Jamie McKelvie should seriously win an Eisner for Laura’s hair alone.

The back third of the issue begins to set the major plot engine in motion: Cassandra and her crew are at Valhalla, examining the remnants of Woden’s god-killing machine – even as Woden maintains he was merely following Ananke’s instructions and has no idea what it specifically does. Cass isn’t exactly buying what he’s selling, however, and judging from the cliffhanger, neither is Laura. 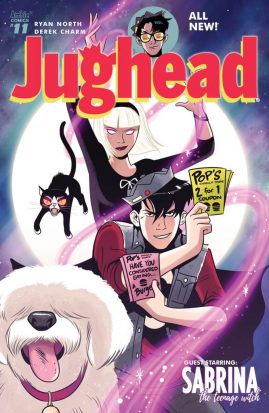 First off, yes, I know this comic is two weeks old. I haven’t been to the shop in three weeks so I am a little behind. Anyway, on to Jughead!

Jughead # 11 caps off Ryan North and Derek Charm’s first story arc on Jughead and it’s a blast! Last issue, after a disastrous date, Sabrina the Teenage Witch put some curses on good ol’ Juggie that involve Reggie Mantle and a monster. No, Reggie isn’t a monster, he and Jughead wind up becoming best pals thanks to Sabrina’s magical tinkering. Sabrina also put a Hellish beast on their unsuspecting tails. Yeah, North and Charm have gone all in on this arc!

Sabrina spends the beginning of the issue realizing that conjuring a monster on account of a bad date probably wasn’t the best move. She then casts a spell so Jughead and Reggie see a giant version of Mr. Weatherbee instead of the damned creature. Whenever the beast roars, all Jughead and Reggie hear is Mr. Weatherbee talk about school budgets. As Sabrina finds a way to send the monster back to its home, the rest of the issue moves towards exploring Sabrina’s situation more in depth and gets Jughead back to his comfort zone – helping friends out.

There was concern that Jughead’s asexuality from Chip Zdarsky and Erica Henderson’s run got lost in the first North/Charm jam but Jughead # 11 addresses Jughead’s fascination with Burger Lady. Jughead, like any other teenager, is susceptible to peer pressure and got caught up in Betty and Archie’s well-meaning meddling. His friends maybe chock full o’ hormones, but that’s not who Jughead is. North and Charm get to Jughead’s core and develop his and Sabrina’s friendship through the issue.

Jughead continues to be my favorite read month in and month out. North and Charm’s work on these past three issues has been a hoot and continues to be a bright spot in my comic reading time.