I’ve heard other critics describe the kind of grisly, cynical spectacles that Yasuo Ohtagaki and his ilk specialize in as emotionally insincere; I even described it as “cool” but that strikes me as wrong. For all these writers rely on irony as a dramatic crutch, their works are not wholly cynical. Any ironist who would break up a spectacle drawn as lavishly as the dogfight between Io and Daryl in this third volume of Mobile Suit Gundam Thunderbolt for a dream sequence that finds Daryl running across the beach to embrace Karla while a song that’s ostensibly about a mother addressing her newborn (but which, when considered as part of the scene it’s depicting and alongside every other song in this series, sound suspiciously like one lover addressing another) would almost certainly wink at the audience through some cue that made the absurdity of this moment obvious. 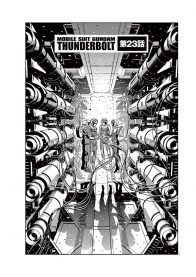 Ohtagaki never does, though. Everything about the sequence – the deliberate but never exaggerated pacing, the asinine but never on-the-nose lyrics, the long-shots of Karen and Daryl that present their happiness as earnest and beautiful – suggests that he believes totally in its emotions. Readers are supposed to understand the juxtaposition of this fantasy and reality as tragic in much the same way they’ve been led to interpret the contrast between the musical cues and the brutal slaughter of this conflict: as yet another reminder of the gap between our loftiest sentiments and the ugly reality we inhabit. This contrast may be the only tool Ohtagaki knows to use, but it’s not one he uses without conviction. All those lingering shots on mangled soldiers and corpse-strewn battlefields and every bit of dialogue suggests he truly does think that he’s showing us the ugly truth of war. Ohtagaki’s problem is not that he is a manipulative fraud who sneers at the misfortunes and the emotion of his characters. Ohtagaki’s real problem – a problem he shares with all of his peers – is that he is an impossible idiot.

Like Zack Snyder, like Todd McFarlane, like Hajime Isayama, Ohtagaki’s work repels deeper emotional investment not because it is without emotional conviction, but because the author does not understand the feelings he’s presenting to us and so relies on a language cobbled together from cliches, trite imagery and banal symbols he’s aped from a million disparate influences he never bothered to understand to convey feelings he’s does not understand. He blunders about, trying to sell us on a horrific panel of a group of child soldiers obliterated by a beam saber, a montage of Zeon’s suicidal zealots suicide bombing the frantic vestiges of Federation forces while callous generals gloat about their impending honors, and yet none of it seems as disturbing as it should. All the visual signifiers are there to let us know we’re witnessing something grave, with plenty of blood and gore and detailed linework and intricate lighting intended to make everything look grim and grimy and gritty. Yet these scenes end up reading not as a stark reminder of war’s evils so much as a desperate attempt to sell the story’s “realness,” a sentiment that in turn almost always plays as an author’s desperate attempt to demonstrate how “real” they themselves are, a plea which, finally, begins to sound like an author begging readers to think they’re aware, that they’re nobody’s fool, that they know the score and won’t be tricked by the lofty sentiments and lies that also betrayed their characters. That they are “cool.” 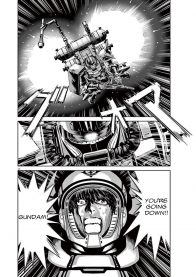 Again, this is not necessarily ironic: the author never intends that you should laugh at the characters’ misery or buy into any myth that you’re above them. The disconnect results almost entirely because of the author’s own emotional stupidity, a stupidity that prevents them ever connecting with the characters and stories they think they want to write about. So they find other things to dwell on. In Ohtagaki’s case that would be the hyper-detailed art. There’s much to admire here: Ohtagaki has a sense of scale and a meticulous obsession for depicting urban destruction that frequently recalls the best of Tsutomu Niheii and Katsuhiro Otomo’s work. There is something eerie about his depiction of the colony skeleton that it seems not so much the ruin of earlier martial conflict but the fossil of something ancient and inscrutable; it is the only thing that lends this volume any atmosphere. His lighting is often as inspired: a frequent decision to depict the Psycho Zaku and Thunderbolt Gundam as if they were photo-negatives of themselves grants them character and presence their over-designed appearances always failed.

It is still not enough, though. Even when Ohtagaki finds his a way to lend his story something interesting to pay attention to he fails to invest it with any weight, literal or figurative. The high-speed mobile suit combat is so weightless as to feel ethereal: shots land with no force; transitions from panel to panel often make it seem as though the mobile suits have teleported. There is something essential missing in these moments, just as there is something essential missing from the characters and the story, a basic lack of comprehension that insures that Mobile Suit Gundam Thunderbolt‘s third volume remains as joyless and stupid as the preceding two.

Shelfworthy – An Excerpt from Unwinnable Monthly 91