This week I read Jim Butcher’s The Dresden Files: Wild Card #4, which is a mouthful. One of the best things about Jim Butcher’s novels is that you never feel lost. Though Butcher weaves intricate tales with massive casts, he follows the Joss Whedon school of “rules.” Everything in The Dresden Files universe happens for specific reasons; cause and effect, and Butcher rarely deviates. While things get a little more complicated than a 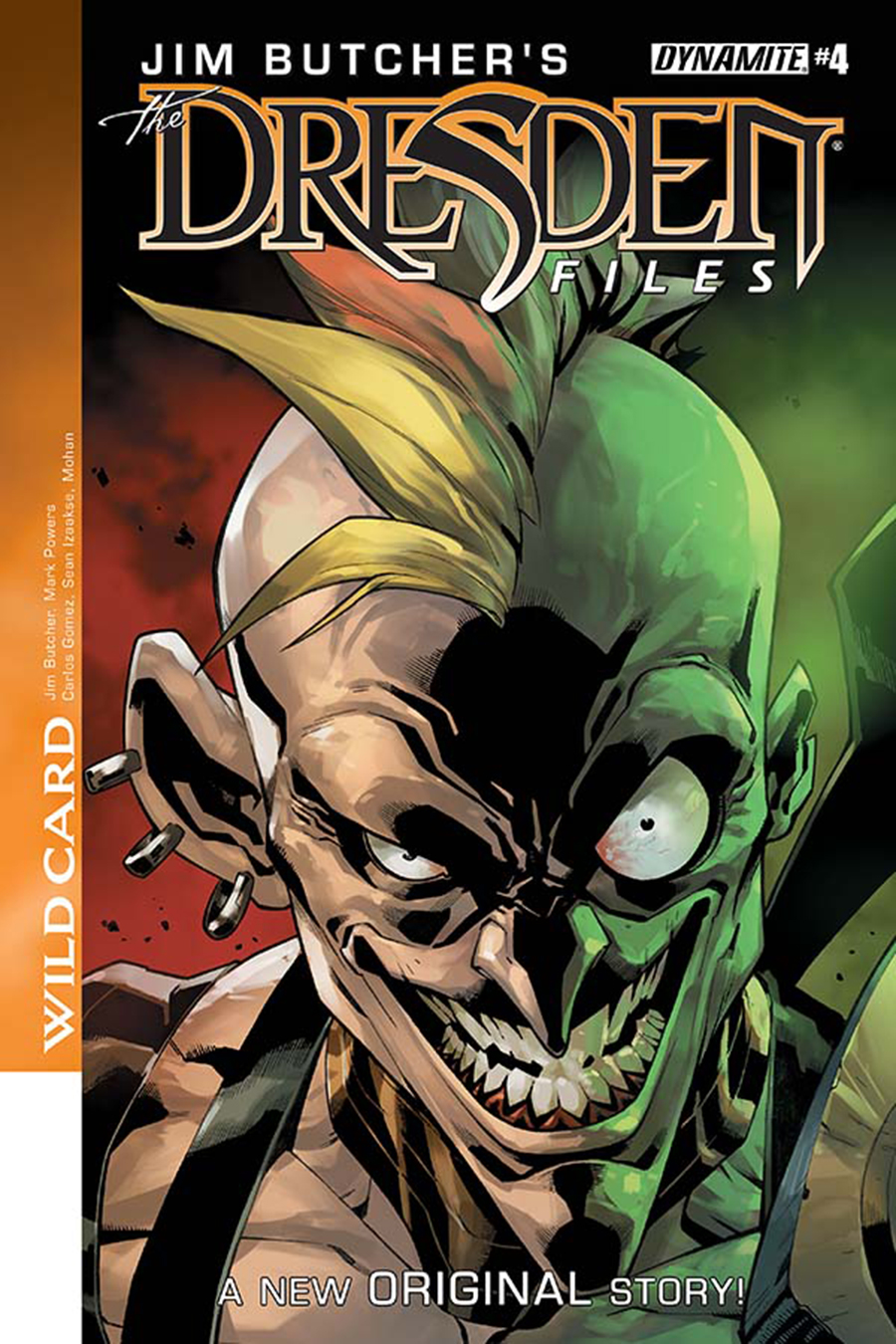 simple rock, paper, scissors of magic, The Dresden Files steeps itself so deeply in its rules it functions as the bedrock of a tangible world.

This works extremely well in the original Jim Butcher novels, but in the comics it’s actually kind of a chore. Something like half the pages feel as though they’re recapping something I already know or something implied. Every line doesn’t need to advance the plot but more of them should! True, this is a monthly series (and Wild Card is a brand new story in the Dresden universe), so readers may have forgotten a few things, but halfway through the eight issue mini-series seems like a sub optimal time to give so many panels over to recaps.

The Dresden Files draw heavily from existing mythologies and puts a new spin on them. The introduction of Puck – a wild cross between Mr. Sinister and something out of Mad Max – was riveting this month. If the idea is that literature and folktales are sanitized versions of real creatures, then what could be behind Puck’s look and malicious behavior? This is where the Dresden Files is often at its strongest.

Except it ends on a massive cliffhanger. With so many panels and pages devoted to recap and flashback, ending the issue here is even more pronounced. It doesn’t just end on a “about to get good” moment” it ends on a “finally, something good” moment.

Another disappointment is how ungrounded all of the characters’ designs are. The cast of The Dresden Files are all either otherworldly or somehow larger than life. A fantastic example of this is Mouse, Dresden’s dog. Mouse is a descendant of a “Foo Dog,” a type of Chinese temple guardian, and to this end, he’s drawn as a massive beast, nearly as tall as the six and a half foot tall Dresden.

But in the comic Mouse is really the only character who gets this treatment. None of the other characters really get anything that visually sets them apart from passersby except for the most general aspects. Karrin Murphy is the only blonde. Dresden is tall, and sort of bulky. Lara has the physique of a supermodel. The visual nature of comics give them a powerful tool not found in novels, why not capitalize on that?

None of the characters have anything that quality that makes them pop off the page.

What really ties the Dresden novels together are the all out battles in the third act. Some of them accomplish this better than others. Hopefully, Wild Card can find that magic in its third act.

Somewhere around The Wicked + The Divine‘s  introduction of the god Dionysus – issue #8 or thereabouts – something went around (on tumblr, perhaps?) asking people to join D’s mailing list. What for? How, why? It remained to be seen, and I’m fairly sure at least a couple of months went by before those of us who signed up saw the fruits of our minimal labor. Eventually, we got a missive from Dionysus himself, detailing his brief meeting 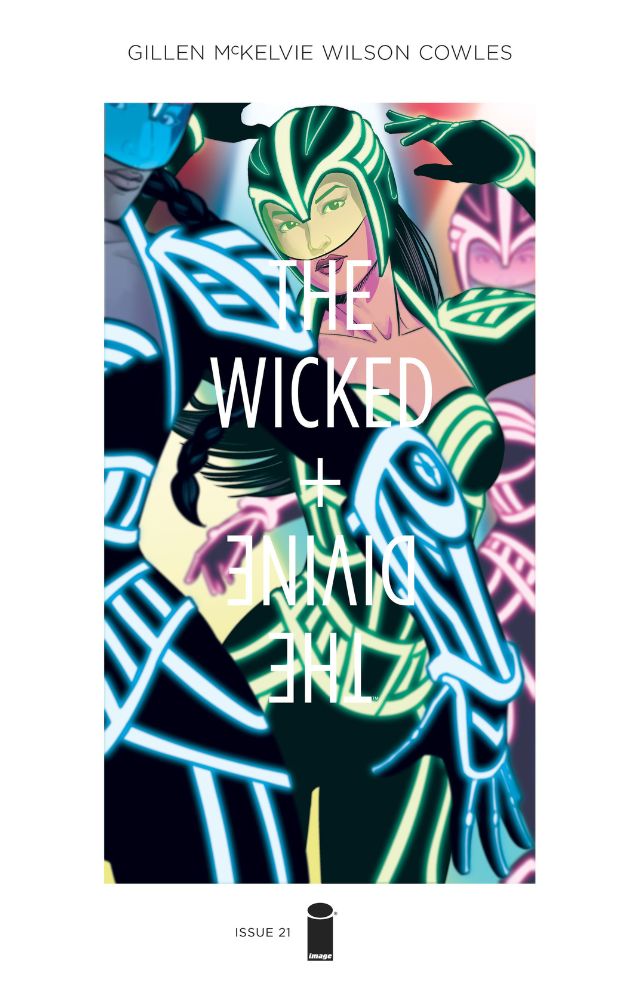 with Tara (the god of who-knows-what in the WicDiv universe), and when and how to get his special brand of “Yolo” t-shirts at New York Comic Con 2015 (well played, WicDiv marketing team, well played). But then, radio silence. Until now.

We subscribers received another missive, a call to arms, in our inboxes in anticipation of this week’s issue, asking for any and all followers of Dionysus and his way of life to meet at Valhalla in order to participate in an epoch-defining battle against the gods. I wonder, if I was in London, would I have ventured out into the night to look for other readers of the comics? Where’s Valhalla? I don’t know, but maybe its real world equivalent manifests as the common ground between all of us. Maybe it’s as close as the pub down the street; as far as a city across the sea.

Issue #21 of The Wicked + The Divine is practically non-stop action: Pantheon warden turned traitor Ananke and misogynist extraordinaire Woden have managed to get firm hold of young goddess Minerva, and to finish building the machine that would turn the offering of her bodily sacrifice into the source of unfathomable power for Ananke. Laura, Baph, The Morrigan, and Dionysus mean to stop the macabre proceedings. Baal and Amaterasu, still not knowing the extent of Ananke’s machinations, have thrown their lot in with the two deceivers, though they’re both too smart to stay there for long. Everyone fights, Dionysus upping the ante by bringing the weaponized party people who ostensibly turned up from his email invite, and Woden matching that by revealing a heavily upgraded version of his Valkyrie soldiers.

The writing is minimal in this issue, placing emphasis on McKelvie’s dynamic art of war, and it ends on a terrifying cliffhanger: Minerva is firmly ensconced in the gaping maw of Woden’s god-sacrificing machine, with seemingly no one near who can help – though there was the briefest hint of regret in Woden’s demeanor early on in the issue, once he realized Ananke really meant to sacrifice 13-year-old Minerva in order to reach the apex of her power. There are some lines, it seems, even a complete douchebag hesitates to cross.

I’m again at a crossroads in my comics readings. It’s happening with increasing frequency. The books I buy regularly aren’t giving me the kicks I need and nothing new has really jumped off the shelves at me, and shouted to be taken home. Unwinnable’s stalwart Ian Gonzales, always ready with a knowing nod and a nudge in the direction he knows you need to go, mentioned Black Hammer. I’m glad I took Ian’s suggestion, and should have known all along to go to him first for guidance. 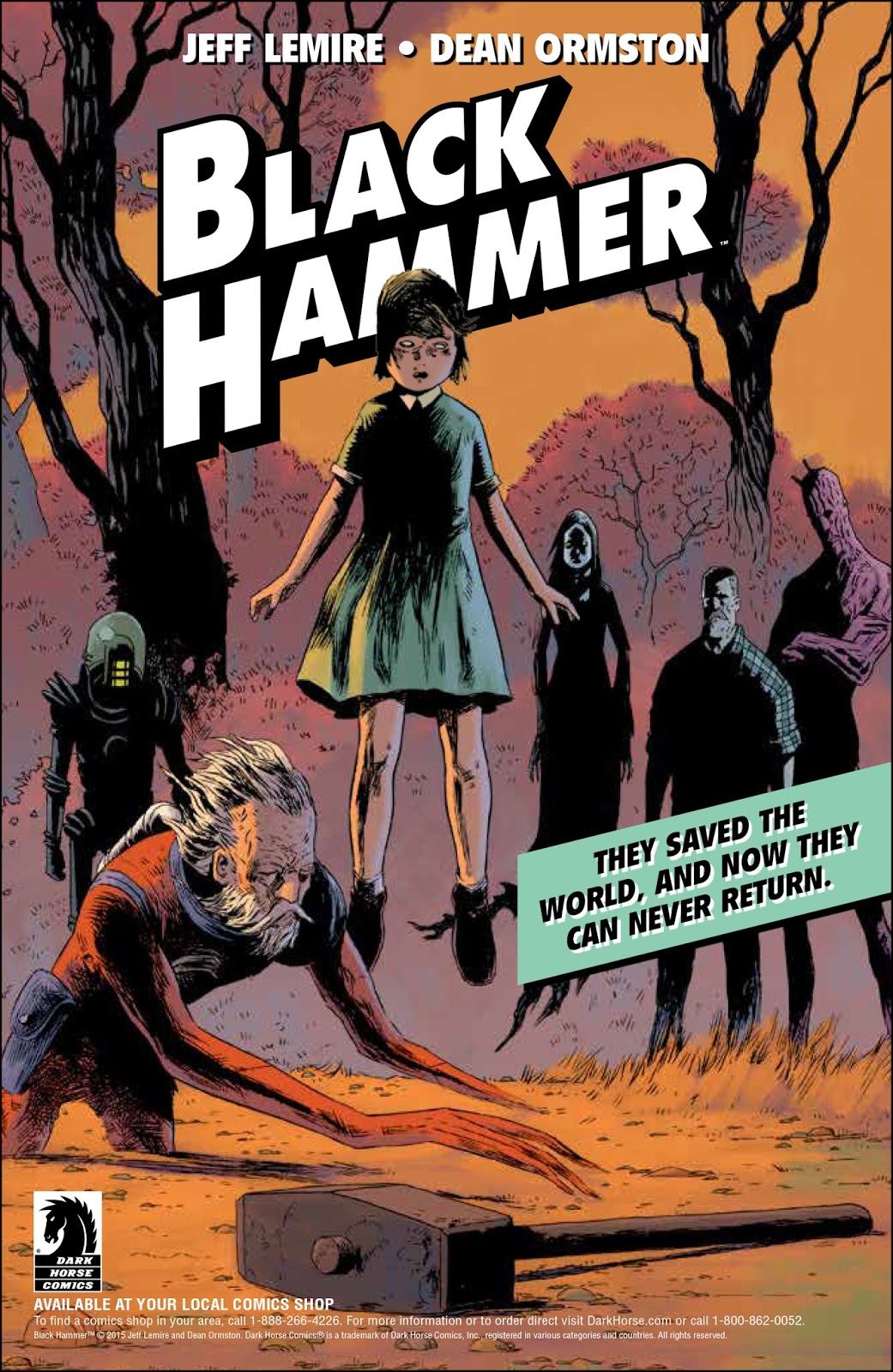 identities in a nondescript small town. Issue #1 lets out details good and slow, like an expert fisherman letting out a line while hunting for the big catch. Some of our heroes don’t like their new lives, even though they’ve been living them for 10 years. Certain of our heroes are prone to acting out and getting in trouble with the law. Others have seen better days. And most mysterious, what happened to Joseph “Black Hammer” Weber?

I’m familiar with some of writer Jeff Lemire’s work from DC (Futures End) and Marvel (Old Man Logan) but this is the first of his creator-owned work of his that I’ve read. His characters in Black Hammer are wise, yet weary; they’ve suffered but haven’t given up. Each character has his and her own sets of quirks, leaving the reader to wonder how our heroes are able to avoid notice from ordinary townsfolk. The characters are unique but somehow feel familiar. There’s the brain-fired Colonel Weird, the motherly robot Talky Walky and my favorite, Golden Gail, who is stuck in the body of a foul-mouthed nine-year-old girl.

I was sadly unfamiliar with Dean Ormston and his art, which needs immediate rectifying. His character design is strong and tells a lot without overloading any pages or panels. Ormston brings to mind Sean Phillips’ work in Criminal andFatale, as well as the work of Mike Mignola. Is it a coincidence then that Dave Stewart (who’s colored books by both Phillips and Mignola) just so happens to handle colors for Black Hammer? Regardless of my lame attempt to start a conspiracy, Ormston and Stewart are a good team, and they add an unidentifiable eerie quality to the series.

Black Hammer is the book I need right now, and has qualities that will keep me coming back. There’s mystery, a hint at the action that could be and the art compliments the story. Circumstances have caused several delays over the years in the publication of Black Hammer (including some health problems of Ormston’s, so cheers to him doing well again) but this series is coming to me at the right time. See you in Black Hammer here next month!

If You Build It They Will Come: Mark Oshiro on Trolls, Fandom, and Community Management

Crest, and the Gods of Not Knowing Very Much