You can tell the measure of a comic book series by the way they handle their info-dump issues. WicDiv #20 is nearly all exposition, but with the steady hands of Kieron Gillen, Jamie McKelvie, Matthew Wilson, and Clayton Cowles at the helm, it’s still a complete pleasure to read.

There’s very little action in WicDiv #20, and, in fact, the most poignant section is made up of 10+ panels where a major character remains fixed in one 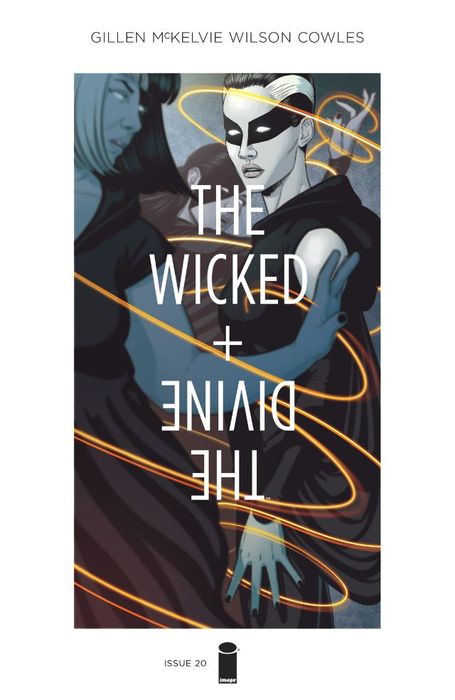 place for each one. Her clothing changes in small, almost imperceptible ways, though, a subtle and effective way to portray the passage of time. Major kudos to McKelvie for this technique – it took me a second read to catch this detail, but it’s a delicious one.

The bulk of the narrative is told in flashback (indicated cleverly by Wilson’s coloring) by Laura, now ascended to the Pantheon as the goddess Persephone, to Cassandra, now ascended along with her crew to The Norns, triple-goddess soothsayers. It’s a clever callback to the relationship they shared as mere mortals, a fangirl spilling dirt to a journalist covering the celebrity-God beat. The more things change, the more they stay the same.

The issue solves several of the mysteries we’ve encountered over the past few chapters, and indeed throws the solutions at us all at once, rapid-fire. We learn how Laura survived the night of her ascension, the powers she’s gained, what exactly went down between Baphomet and Inanna, and who exactly Baph is as opposed to who he says he is.

The muted statement in the latter reveal about identity, or more accurately, our innate nature dissenting with our ego – who one is versus who one wishes to be – is a nice bit of philosophical dynamism in an otherwise physically inactive issue. Perhaps it’s not a case of either/or, but both at once – for better or worse.

Injection is the epitome of a slow burner. In fact, it might be the slowest burner to ever slowly burn. Warren Ellis seems to be building towards
something with every panel and every line. It feels as though he’s thrust us midway into a conversation that is lightyears beyond our comprehension.
Injection #10 is really no different but it is the conclusion of Injection’s second arc, which I’ll call Human Meat/Sex Ghost for lack of a better term.

I can report what happened but not what it means. Vivek solved the case of the Human Ham Sandwich and the Sex Ghost but that it never feels like 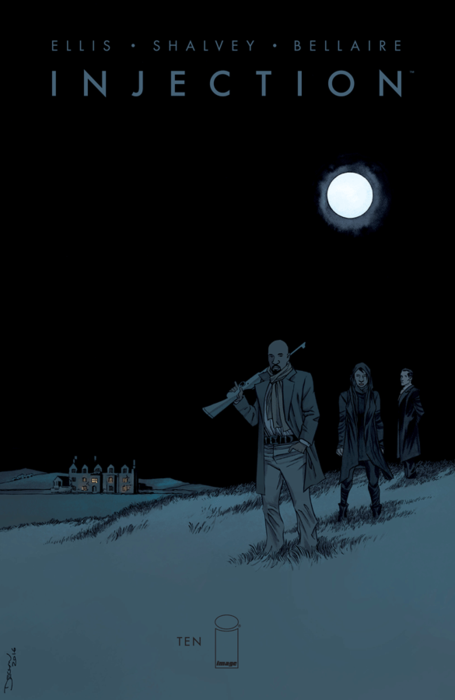 Injection is about the plot. In fact, it feels like Ellis is building towards something in the background. The eponymous Injection is lurking behind every page, every screen, and every panel. Each arc of Injection seems to be laying the foundation for something but what could it be?

The dialogue isn’t the only place were Injection #10 really demands its own kind of literacy or fluency. Declan Shalvey’s art and Jordie Bellaire’s colors are phenomenal. Each page has a color temperature theme to it that can rapidly accelerate the weight of a scene or slow it to a crawl. It’s mood building in the subtlest, most powerful ways. Looking at each panel in vacuum doesn’t do Shalvey and Bellaire’s work justice. The pages have to be taken as wholes, they must be looked at both for the broad strokes and the short ones.

Unlike the previous issues of Injection, #10 is a tutorial on visual storytelling. If you were to strip all the dialogue out each page would still be full of all the emotions that Ellis’ words would convey. Body language and color do the heavy lifting. This isn’t saying that the dialogue and writing isn’t great, it is, but so much of the heavy lifting in this issue is done with image alone and it’s wonderful.

Perhaps Injection is an indictment of the kinds of big payoffs that we yearn for. None of its characters seem to be where they want in life. None of them are “happy.” All of them are picking up the pieces from their previous life together. But where does that leave the reader? Stuck really. It’s difficult to shake the feeling that if only I just knew one more bit of info I might unlock some great secret. Maybe that’s what we’ll get when Injection returns later this year.

Oh boy, the Superman comics sure are even more insular since DC Universe: Rebirth # 1. The Superman we met in the New 52 is dead. His identity as Clark Kent was exposed to the world. So Lex Luthor, former member of the Justice League, dons his Apokaliptian armor and announces himself as 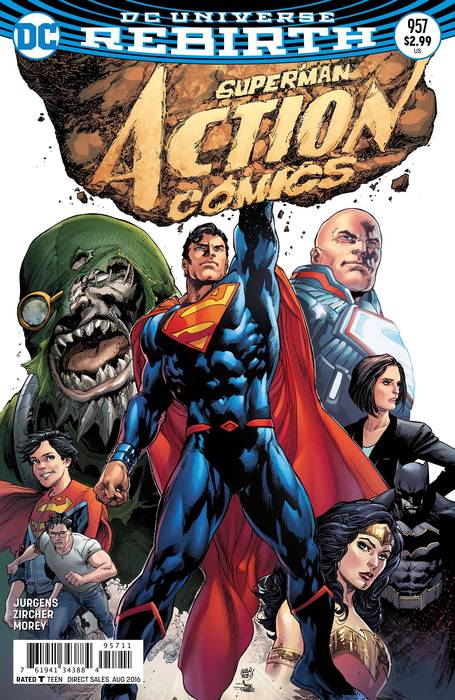 Metropolis’ new Superman. The only thing is, there’s another Superman – the one myself and probably most of you Dear Readers grew up with, Post Crisis Superman. It seems he’s been living in the New 52 for 5 years since he, Post Crisis Lois Lane Kent and their son, Jon, survived Convergence. He’s been keeping a low profile in order to protect his family, Now that this world’s Superman is dead and Lex Luthor wants to take his place, Post Crisis Superman can’t stay in the shadows – he has to shave and then reveal himself to the world. Oh, and a new Clark Kent shows up at the Daily Planet, completely oblivious to the fact that the whole world knows Clark Kent is Superman.

That’s not confusing at all, right?

Most of this issue focuses on New 52 Lex meeting Post Crisis Superman. Superman gets unduly aggro with Lex. When Superman shows up on the scene, he orders Lex to remove the Superman symbol from his chest. Lex says no and tries to discern who this Superman is. Supes then lunges at Lex in an attempt to rip the symbol off Lex. Look, we all know Lex Luthor is a bad guy, but New 52 Lex did legitimately save the world (and Dick Grayson’s life) and he was a member of the Justice League. As they battle, they’re surprised by an old foe – Doomsday!

All kidding aside, I enjoyed Action Comics # 957 and I am intrigued to see where the story goes. Patrick Zircher’s art in this issue is amazing! His Lex has a smarmy confidence that only the best Lex artists can draw. His Superman is both power and grace personified. I can’t wait for the story and status quo to shake out to something that doesn’t require a degree in Supermanology to understand. Until then, stay for the dazzling visuals!