Lovecraft is everywhere these days. Even if there are no tentacles to be seen, his themes of cosmic dread, of a vast and uncaring universe, have riddled the pop cultural landscape. Outside of fiction, though, nowhere is his hold so strong as in games. From the Call of Cthulhu tabletop RPG to the Arkham Horror board game series to Infocom’s Lurking Fear and the original Alone in the Dark, Lovecraft has been a constant companion in the history of games.

Today, we’ve entered a cosmic horror renaissance, with as many Lovecraftian titles as there are types of games: Amnesia, The Last Door, Bloodborne, Mass Effect, The Secret World, Darkest Dungeon, Dead Space and countless others. Now, a team from Istanbul, Turkey, seeks to reveal the mysteries of the Conarium.

The team of three – Galip Karto?lu, Oral Samli and Onur Samli – came together 14 years ago to develop adventure games. Using a proprietary game engine, they produced a pair of Lovecraftian horrors called Darkness Within: In Pursuit of Loath Nolder and Darkness Within 2: The Dark Lineage.  After a five year hiatus, they team returned to the Darkness Within game with an eye towards updating them for Steam. Working together again revived their passion for making horror games. Thus was Conarium conceived.

Conarium is a story heavy Lovecraftian horror/adventure/exploration game played in first person perspective. The game takes place on an Antarctic expedition, with the player taking the role of amnesiac Miskatonic University lecturer Frank Gilman to find out what the group’s actual purpose is. Along they way, you’ll explore everything from a Victorian mansion housing a grotesque and exotic collection of relics to the catacombs of a pre-human city with its non-human residents still sleeping in their rock coffins.

3D artist Onur Samli took time out from development to chat with us about Conarium and the enduring appeal of Lovecraftian horror. Look for Conarium on Steam soon! 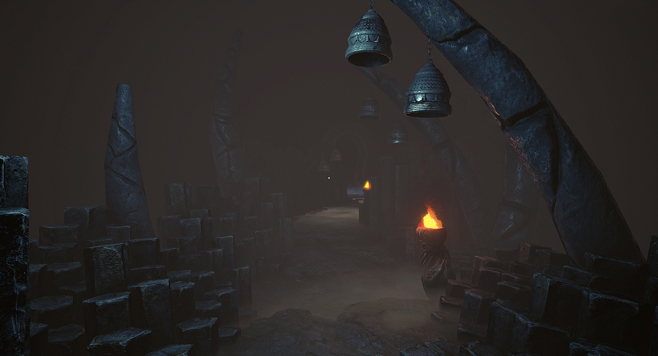 Lovecraft’s work, particularly his themes of cosmic horror, have become increasingly visible in mainstream culture, especially in games. Why do you think this is?

Onur Samli: I believe there are two main causes. First is the rise of independent game developers and some of their successful launches on various Lovecraftian themes, which are popular among indie gamers and YouTubers alike. Second, I believe, is  Lovecraft’s way of building his stories. He was a myth creator and always interwove his own ideas with historical facts and real world mythologies. This alone makes it easy for creators looking for new themes to incorporate Lovecraft’s ideas into their own.

What is it about Lovecraftian horror that appeals to you personally?

O. S.: I especially love the way he sifted reality with his sieve of creativity and mixed the result with his own fiction. Also, his use of intertextuality. These let me find clues elsewhere regarding the situations described in his works. I think this is simply amazing.

What can you tell me about the name of the game? I know that the conarium is somehow connected to the pineal gland…

O. S.: Yes, conarium means pineal gland, a pine cone-shaped gland which René Descartes referred to be the “principal seat of the soul.” It is also linked to a vestigial organ, known as the parietal eye, which is also called the third eye. You can trace the concept all the way back to the classical antiquity and beyond. One can find several references to the pineal gland in numerous ancient cultures. Just to name a few: the Sumerian god Tammuz was depicted as holding the sacred pine cone and the Egyptian staff of Osiris has one on the top. 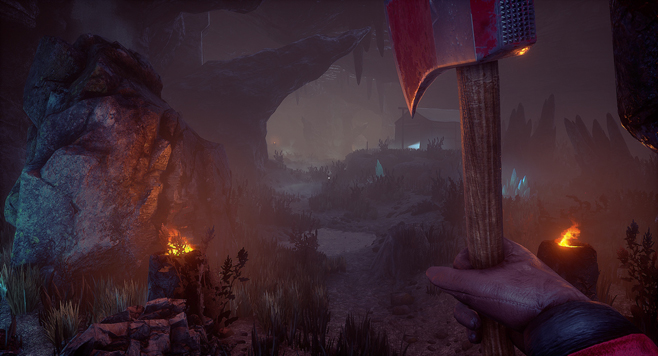 How do the concepts of time and perception play into Conarium?

O. S.: Conarium is a story driven game and we chose to convey the story in a nonlinear fashion. By saying nonlinear, I don’t mean that player can travel between different times and spaces as they  will. The way the story is presented and narrated in is nonlinear. We use the literary device called stream of consciousness in a psychological and physical sense; thoughts and past experiences of the protagonist can be experienced by the player when interacting with game objects that are somehow  familiar.

I’m intrigued about human perception being central to a game where being perceived (by hostile inhabitants of the environment) is obviously detrimental to the player’s health. How do you balance a player’s curiosity – their need to perceive – against the inherent dangers of being perceived?

O. S.: Actually, I can’t say the concept of perception exceeds the storytelling to become a major mechanic of the game. We’re strongly limited to the narrative design. We tried to incorporate such elements as a main mechanic but we quickly realized, being a team of three comes with its limitations.

Does Conarium have a sanity mechanic?

O. S.: At the initial phases of development, Conarium was more action heavy than it is now. And back then, we wanted to have a sanity mechanic that would suit the game. We changed the design quite a bit as the development progressed. Now action is not in the prime focus of the game and sanity has becomes a narrative element

Conarium seems to be a cousin of other “hiding” games like Amnesia: The Dark Descent. How do those mechanics work with Lovecraftian themes?

O. S.: No, actually it is not. During the initial phases, we designed the game to be more action heavy. Player would need to hide to avoid creature encounters in order to progress in the game. At some point, we even thought about giving the protagonist some enigmatic powers to deceive and thus escape from dangers. But it seemed that such mechanics don’t fit into the realistic Lovecraftian setting we are aiming for, so we decided to use the action sequences as a means to convey the story rather than making the game a monster maze.

O. S.: Our sole desire is to convey a Lovecraftian story that players can immerse into and feel as if they are exploring secrets spanning from the modern world of 1950’s to what remains of an unfathomable antediluvian epoch when civilizations unknown to men arose and fell to ruin.

How does Unreal Engine help in developing a game like Conarium? Are there any unexpected benefits or challenges?

O. S.: UE4  definitely helped a lot. For a development team of only three people, updating our proprietary engine was not viable. We evaluated a few different options and, in the end, decided to use Unreal Engine 4 for its robust visual capabilities, ease of use and variety of platforms it supports.

O. S.: No, not to that extent, but since we are an independent development team and we cover most of the costs by ourselves, the Dev Grant has given us an economical  relief. The most important benefit it provided, is that it gave us courage, since to be selected among many successful projects is something to be proud of.