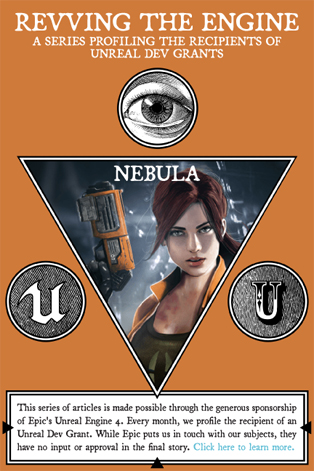 This story is a reprint from Unwinnable Monthly #90. If you like what you see, grab the magazine for less than ten dollars, or subscribe and get all future magazines for half price.

“ALL THESE WORLDS ARE YOURS – EXCEPT EUROPA. ATTEMPT NO LANDINGS THERE.” That’s the ominous warning from Arthur C. Clarke’s novel 2010: Odyssey Two. Since then, Jupiter’s smallest moon has become an object of both fascination and horror for writers, filmmakers and game developers looking for a setting where extraterrestrial life in our solar system is perhaps most likely. Among them is Bruno De Araujo, whose forthcoming game Nebula: Sole Survivor attempts to answer what lurks beneath that distant ice.

Nebula follows Ivy Howlett, a scientist, engineer and, now, the last human being occupying CICADA base on Europa. She’s not alone though: Europa is home to terrifying alien life forms. With no way to contact Earth, Howlett has no hope of rescue. Her only option is to find a way to survive. Once envisioned as a side-scroller, Nebula is now a top-down action game with a focus on exploration, puzzles and combat.

De Araujo has been working on Nebula for a long time. The first prototypes date to 2005 but real life and a number of other jobs got in the way. In 2014, after a move from his native Brazil to Vancouver, armed with a brand new computer and the newly release Unreal Engine 4, De Araujo got back to work, taking the moniker Solidmesh as his studio name.

Unreal’s Blueprints were crucial in turning Nebula from a hobby to a serious development project. “I’m a CG Artist here in Vancouver,” he say, “and when I go home. I go straight to my computer to put in some more hours on my games. I love it. It’s for real now.”

Nebula is (mostly) a one-man project (“I have a feeling that that may be the reason why it’s taking so long,” says De Araujo, though his wife act as his project manager, keeping him from turning into a “feature creep.”

Nebula’s development takes place between other projects, like Nightstar VR, built for the HTC Vive, and Nightstar: Rogue Wings, now on Steam Early Access, likening the project to raising a moody and temperamental teen. This summer will see a return to Nebula’s development, implementing feedback from a recent free open beta. De Araujo took time out of his busy schedule to chat about being a solo developer investigating the mysteries of Europa.

From the Alien movies come the background for the story: a female lead, a survivor, a ship where everything seems to have gone bad. Of course, Nebula doesn’t have only one badass enemy, but a series of smaller enemies and then bosses for you to fight against, but the core of the idea was definitely inspired by the Alien franchise. Oh – there’s also the recent Alien: Isolation game was a major inspiration for the atmosphere of tension (where I believe the immersion is centered) and the stealth elements (without which it would just be your regular action shooter).

From Metroid comes the inspiration for Nebula to be an exploration-based game, and the upgrades systems were also inspired by this classic.

Then there’s the Legend of Zelda games, not enough words for these. They inspired Nebula’s item-based puzzles. I also took some inspiration for how I portray the story, especially in my decision to make the game be top-down instead of a side-scrolling platformer. 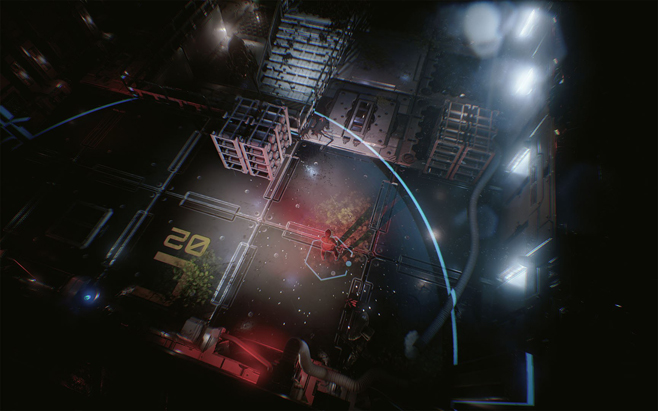 In portraying Europa as a place of mystery and danger, Nebula seems to fit between the film Europa Report and 2010: Odyssey Two. What do you think it is about Europa that captures our imagination this way?

That’s awesome! It makes me think of Ernest Cline’s book Armada, which also revolves around Europa as a place of dangerous threats. And doesn’t the moon’s name sound appealing? I mean, Eu-ro-pa. It carries some weight, it means business.

For me the romance with Europa began when I first learned that the moon has an icy-water surface. Now (and maybe I’m wrong here) it seems that there are hints of water on more moons in our solar system, but Europa was definitely the first time I’ve heard of the possibility of water so close to home. And Europa is right there! With us having been to the Moon already, plus a number of unmanned missions to explore our neighboring planets and their moons, it’s just a matter of time before we start sending crews out there to explore. I mean, it’s not as distant as LV-426 from Alien, right? It’s definitely something that can happen in our lifetime.

Obviously, where there’s water, there’s a strong possibility of life, so then it all comes down to a series of what-ifs. Europa seems so promising for carrying actual life forms, so what if? And what if these life forms are not just some small bacteria but larger creatures? And what if they are not exactly friendly? Then imagination takes over.

Being a sci-fi work, Nebula doesn’t focus too much on actual scientific facts about the moon, the life forms or even the way the human body would respond to different environments. Instead, the game counts on a good level of freedom to explore scientific themes in a fictitious way that relates more to the entertainment of the whole thing—creating interesting scenarios and presenting interesting possibilities rather than teaching science. 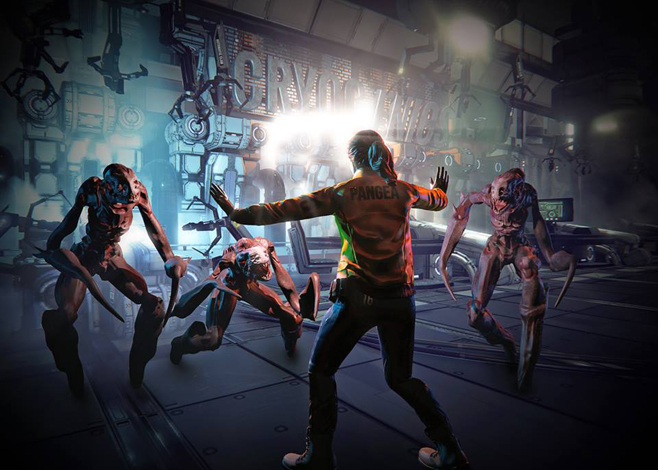 I think that when it comes to more personal projects, like this one, it’s my preference to have a greater level of control over the whole thing, essentially being in charge of the entire development of the game. I mean, I work at a tech startup here in Vancouver and I’m part of projects that involve several people at once. I love it how everyone comes together to build features and test them, creating working software in considerably short amounts of time. But those are projects that essentially belong to someone else, and we view the company’s customer as the ultimate product owner.

It’s the opposite for Nebula because it’s my own. Then again, I’m not aiming for a massive game with multiplayer features or something huge that would require a big enough team behind it. It’s not like that. Nebula is about exploration, it’s about an adventure that you’ll embark on, with mysteries to solve and a story to unveil. I see it as more of a handcrafted work of art, and for me, that’s the beauty of it. I believe I can do this by myself, but I’m also counting on my wife’s project management skills, as she keeps me on track and when I’m feeling frustrated she goes and cheers me up and steers me back in the right direction.

Why did you opt to make Nebula a top-down shooter? Are there specific aspects of the genre you’d like to experiment and tinker with?

Nebula started out as a side-scrolling platformer and I kept that idea for quite a long time. Eventually, I started to realize that a side-scrolling view wouldn’t convey the feeling of combat I was aiming for, something more strategic where you could grasp details of the scene that is happening in front of you. I think it gives a different level of immersion, especially with the tension and the stealth elements. For exploration, too, I believe the top-down was a good choice, as there are several moments during the game when you’ll go out and about finding new secret rooms and revealing new scenarios and new puzzles, new enemies, etc.

What do you hope players will take away from Nebula?

Ultimately, I prefer to wait for the players to tell me! I hope Nebula is going to be a unique space thriller experience that the players will have and enjoy, where they’ll be able to explore all these handcrafted scenarios while the story develops and reveals well-hidden secrets about the Nebula mission, its crew and the CICADA base. I hope that players will finish Nebula with a feeling of ‘mission accomplished’ on something that’s kind of like The Martian but with aliens! 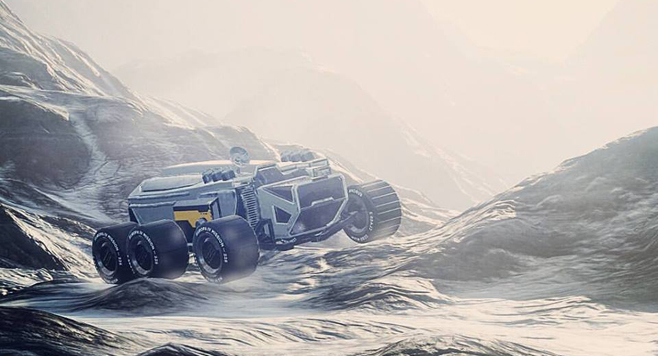 How does Unreal Engine help in developing a game like Nebula? Are there any unexpected benefits or challenges?

Unreal Engine is just amazing, I can’t stress this enough. Nebula (and Nightstar VR and Nightstar: Rogue Wings) wouldn’t be possible without Unreal Engine. I started working with it at a time when I didn’t know a lot about traditional programming (I still don’t, but I can now honestly say that I know code, even if it’s not enough to build an entire game from scratch), and the Blueprints Visual Scripting system is just something out of this world. I can attribute my success so far to Blueprints and its flexibility and ease of use. I can say that this (or the extent of Unreal’s amazingness) was an unexpected benefit in that it makes it very easy to do level design, which is one of the main points in this type of game. Everything is so smooth with this engine that I can’t think of any challenge I’ve had that wasn’t directly related to my own learning curve.

Unreal’s Dev Grant played a huge role in a moment of epiphany when I thought “OK, this is happening.” Of course, I had the intent of launching the game from the moment I first started developing it, but, even so, up until the Dev Grant, it was more like a hobby. After the Dev Grant, it evolved to “Holy snap, I can really do this.” It was an enormous boost in morale for me. I realized that not only can Nebula be launched in the near future, but Solidmesh can in time grow and become a bigger studio.