This feature is a reprint from Unwinnable Monthly #108. If you like what you see, grab the magazine for less than ten dollars, or subscribe and get all future magazines for half price.

One night, a pal of mine was coming by my house to drop something off. I had taken the garbage out and it the weather was pleasant, so I found myself standing near my front steps, staring at the sky. Out of the corner of my eye, I saw my friend approaching me, but he made no sign that he had noticed me – I happened to be standing in a pool of shadow. I stayed absolutely still and quieted my breathing, curious to see when he’d notice me standing there. I wasn’t exactly concealed by the garden, just standing in the dark, so I assumed he would see me as he passed. He didn’t.

There is something incredibly powerful about the ability to disappear.

Of course, as he passed again, I said, “Hey” and scared the crap out of him. If I was the protagonist of the forthcoming stealth game Ghost, though, and my friend a guard, he wouldn’t have had any idea the knife was coming until it was too late.

Ghost is an isometric game, part mystery, part exploration, set in an era not unlike our own Victorian period. The protagonist, Arthur Artorias, is a tragic wanderer returned to discover a secret and right a great wrong. To survive, he must use the shadows to his advantage, and he does – I’ve never seen a character disappear so completely into the darkness in a stealth game before.

Robert Wahby, lead project director of Sky Machine Studios, was kind enough to chat about Ghost, the challenges of isometric stealth and the joy of disappearing into the darkness. 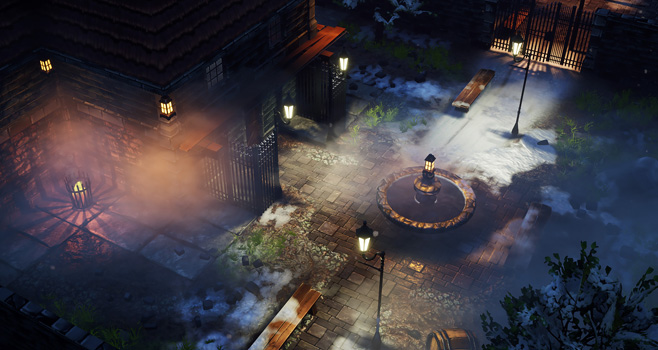 What is the appeal of the Victorian era for you?

For me, it’s the aesthetics and the sense of intrigue that the era brings. When I think of this time period, I picture streets overwhelmed with the night fog and the light from the full moon cascading through the clouds. The Victorian era has a unique atmosphere to it.

From the gothic style buildings to the cobble stone streets, Ghost references these key elements. It is important for the player to feel a sense of the real world, but with a twist of dark and mysterious surroundings. Even down to the clothing the characters wear, the game is highly influenced by certain exaggerations in fashion from the period. You’ll pick up on these qualities when you play through the game. The contrast between the high and low culture, too, is significant, from the regal nature of some characters to the low brow, to the underbelly. We take reference from aspects of history and put our own spin on it.

The idea of wanderer returning reminds me of a number of stories set throughout the 1800s (Magwitch in Great Expectations for example). Can you tell me your thoughts on the theme and how Arthur’s story?

I think it’s a great, classic story we’ve all heard before. You’ve been cast out of your world and your immediate reality, forced to become a pariah to later return with a new sense of conviction and a rebuilt sense of purpose.

The story follows themes of calamity and personal growth. The story of Arthur is not a nice one. Tragedy befalling Arthur shapes his existence. I believe falling into despair speaks to the human condition: you either vanish as a person in the face of tragedy, or you find enough courage to grow. 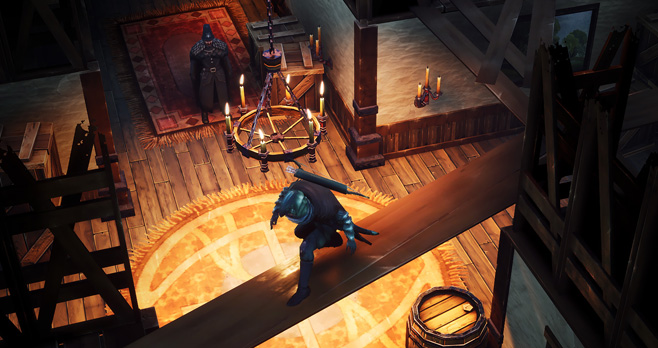 What is your approach to your stealth mechanics? Have any particular games inspired you?

Metal Gear Solid on the original PlayStation was the first game that represented the concept of stealth in videogames to me. However, I would have to say the biggest inspirations have come from the Thief and Splinter Cell series when it comes to direct influences on Ghost.

There is something rewarding when it comes to being quiet, nimble and a stalker from the shadows. Both series introduced and elevated these concepts, ultimately becoming staples of stealth genre. In a way, stealth games are action puzzle games. You need to get from A to B, trying not to be seen, while being aware of your footsteps and avoiding as much light as possible.

Ghost’s approach to stealth is centered around the isometric point of view with a focus on playing your way. Ghost is a sandbox experience, where you decide how to approach every challenge from a myriad of possibilities. Infiltrate unique, vast environments with hidden secrets and treasures. With a sense of freedom and verticality, Ghost is all about options. That open sandbox design has become an integral part of the stealth genre and is something we strive to achieve in Ghost. You know, sometimes the direct route is ill-advised. The world of Ghost is dangerous, so being able to explore your surroundings for alternative paths is key to surviving.

I think the thing I am most impressed by with Ghost is the lighting. The shadows are so dark and intriguing – to the point where Arthur completely disappears into them, a rarity in a stealth game. Can you talk a bit about your design philosophy for light?

The team and I spent a significant amount of time working on the lighting system. We wanted the shadows to become piercingly dark, giving a sense of claustrophobia. We also wanted to create an effect where, while indoors, the outside world is completely dark, centering what is occurring to the players to the immediate environment. Juxtaposed to the darkness are the warm orange glows we have placed for lighting. Arthur explores a dark world, with glimmers of light. I believe all these elements give Ghost its unique art style and, in a sense, as the title implies, Arthur becomes a ghost, disappearing into the environment. 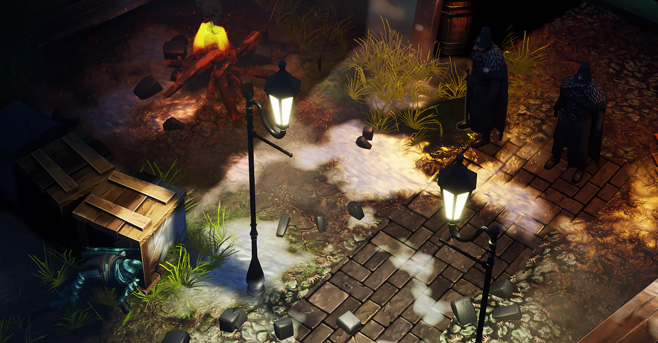 I feel like stealth poses unique hurdles no matter the types of game (sidescrolling, first person, etc). What are some of the challenges and advantages of designing stealth in an isometric space?

I suppose the most challenging aspect of Ghost has been translating stealth concepts typically seen in first and third person to an isometric one. In a first and third perspective, due to the camera angle, the player must navigate around the environment using their eyes. Objects such as walls or crates can easily block the players vision. This forces the player to peek around corners and become spatially aware of their surroundings.

In Ghost, we didn’t want to give the player the magical ability of seeing enemies behind objects, due to the isometric advantage that the angle gives. It’s a stealth game, you’re playing cat and mouse, that concept should reflect in Ghost. We had to create a cone of vision/fog system that impedes the player from seeing enemies behind obstacles. Peeking around corners or through keyholes are vital mechanics necessary for the player to master if they wish to stay unseen. It’s also the same system that blacks out the world while indoors, creating that claustrophobic atmosphere previously mentioned.

Another hurdle is fading buildings and tall objects, so as to not obstruct the player’s vision, and that includes the seamless transition of going from one floor to the next in a multistory building. We have created a system in place where, as the player navigates up to the next floor, that floor is seamlessly revealed. Basically, the entire floor, walls, tables, objects, are animated up and into existence, in a blink of an eye. I don’t think I’ve ever seen a game pull that off, and I suppose you won’t really get what I’m talking about until you see the game, so you’ll have to trust me on this. While these systems have been a challenge, it’s well worth it, and I’m sure the player will appreciate all the hard work that has taken to get these systems working as they do.

Stealth has, to some degree, become associated with non-violence in games, allowing players to bypass at least some combat. What sort of balance exists between violent and non-violent approaches in Ghost and what do you think about the tension between the two in the genre at large?

In most stealth games, the idea of violence and non-violence approach isn’t necessarily a focus for the genre but a by-product of the player being fragile. In most stealth games, you’re not Rambo. You’re not meant to go in guns blazing. If the player was not fragile, there would be no need to take the stealth approach. I believe that one of the most appealing things seen in the stealth genre, is the sense of freedom it can give, within a somewhat constrictive and hostile environment. I like that I can avoid confrontation by exploring alternative paths such as crawling through an air duct.

In Ghost we have attempted to tighten the tension between the two, giving a certain yin and yang flow to the game. For example, if you choke out a guard in Ghost, he will eventually wake back up again. If you kill a guard (a more permanent, riskier solution), he will leave a blood stain on the ground, which can attract unwanted attention. Additionally, if Arthur takes too many hits, he will begin to bleed, leaving blood trails for guards to find, making the idea of hiding much harder until he is able to bandage himself up. Simply, more often than not, it’s better to shy away from conflict in Ghost, but by doing so, there may still be consequences. 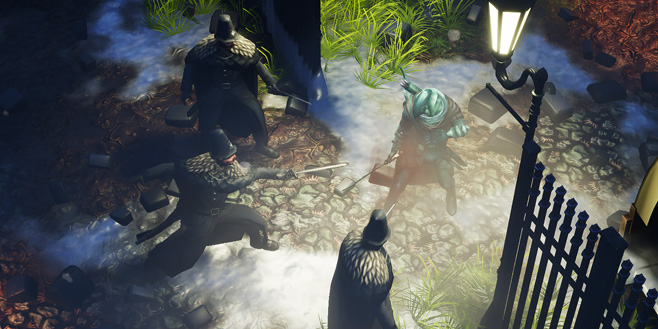 Unreal, out of the box, has most of the tools needed, without having to invest a significant amount of time developing them in other engines. Originally, our team used the Unity Engine for development, however, as soon as we placed some of our assets in Unreal the improvement was noticeable. The visual quality of Unreal Engines lighting system was great, and we knew we had to switch. Considering how important lighting is in Ghost, there were no debates from the team. Ghost relies so heavily on dynamic lighting, shadows are a must have feature. The tools also helped us improve specific point/spot lights in the scene, giving us significant performance boost across all maps.

Unreal also offers great tools when it comes to level designing. Simplicity is very welcoming when you’re trying to prototype a level. One of our biggest challenges was performance optimization, Unreal’s profiling tools helped us find which assets (both from CPU and GPU) were causing performance drops. That allowed us to quickly fix those assets, instead of manually having to check each actor in the scene.

For more on Ghost, visit the Sky Machine Studios website.