If you could boil down my entire character to a single trait, if there was one quality that could sum up my personality, it’s “indecisive.” Ask any of my friends or family and they’ll tell you, “Sam can’t make a decision to save his life.” Case-in-point: I once held onto an Amazon gift card for six months because I couldn’t decide on what disc golf bag to buy.

This hesitance extends to video games as well. Not that I have trouble choosing which to buy; rather, it’s the in-game decisions that give me pause. The biggest offenders are RPGs with branching storylines, huge, open worlds, and, perhaps most egregiously, games that reward any kind of skill points.

I booted up Horizon Zero Dawn last week, eager to bow-murder some robo dinos (the game certainly doesn’t disappoint on the robo dino bow-murder front) and explore the ruins of civilization. I made it through the intro and a handful of other quests before exploring the menus. After scrolling through the craftables, my resource inventory and the world map, I froze like a deer in the headlights.

I had found the skill trees.

I had seven points to spend, but I could’t bring myself to use them. Should I invest in upgrading my medicine pouch first? How about the ability to stealth-kill robo dinos? I could use a stronger heavy attack, too. Oh, and there’s an ability to lure enemies to your location. It was the disc golf bag nightmare all over again. 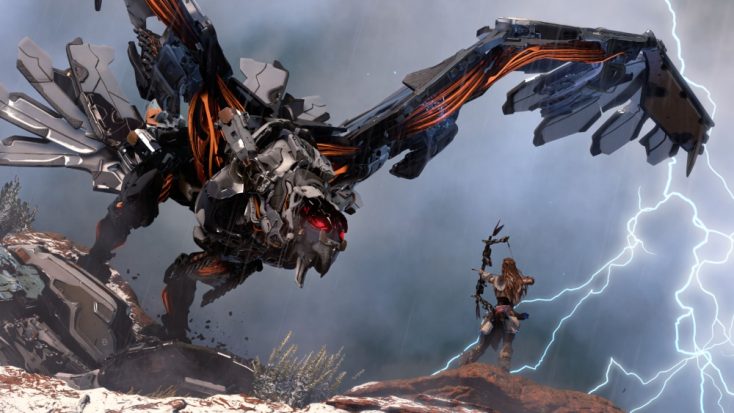 This has been a problem of mine for a while. Thanks to my inability to make a timely decision, I tend to hoard skill points like a doomsday prepper on uppers. What if I make the wrong choice? What happens if I catch myself unprepared for the next encounter because I invested in melee attacks when I should have gone ranged? It’s a vicious cycle that can, and does, result in me taking on mid-game encounters with a base-level character.

I accumulated 12 total skill points in Horizon before I actually spent any. I experienced something similar with 2013’s Tomb Raider, as well as with Borderlands 2 and a handful of other games. Accumulating the points gives me a very satisfying feeling, while spending them leaves me feeling empty and strikes me with instant buyer’s remorse.

Thank god for Skyrim, though. That game almost cured me of my analysis paralysis, to borrow a board game term. Because your skills automatically level as you use them, you aren’t forced to weigh a hundred options. This dynamic upgrading system took a large amount of stress off my shoulders and allowed me to fully immerse myself into the world. I wish more studios would consider systems like this.

That’s not to say that I don’t enjoy skill point allocation. Quite the contrary, actually. Offering the player choice is a vital part of many open world games, and allowing them to play how they want is a great way to foster replayability. The problem is my brain. Somewhere in this man’s body is the decision-making ability of a child. I’ve learned to live with it over the years, even embrace it. That’s the beauty of games: we all play our own way, even if our way is deeply inefficient.

Cat Quest Is Playing Dress-Up With Your Disgruntled Tabby