In a world where geek culture is becoming ever more pervasive, where videogames sell millions of copies and comic books get adapted into blockbuster movies, there still remains one hobby that rides along the edges. There is still one hobby that is shunned by the mainstream. Join me now as we explore the world of tabletop role-playing games. Join me, the TABLETOP WIZARD!

I’m certain that most people who come to this site are already familiar with what a role-playing game, or RPG is, though a good number are probably thinking in terms of video, console or handheld games. Final Fantasy, Dragon Warrior, Oblivion and Fallout are all fairly contemporary adaptations of the classic tabletop RPG – but from here on out, I’m talking about tabletop.

As history tells it, RPGs have their roots in miniature wargaming – basically people enacting military-style battles using maps and miniatures. With the inception of role-playing, instead of the players controlling an army, they were taking control of a single character and playing through that character’s thoughts, actions and motivations in an unfolding narrative. 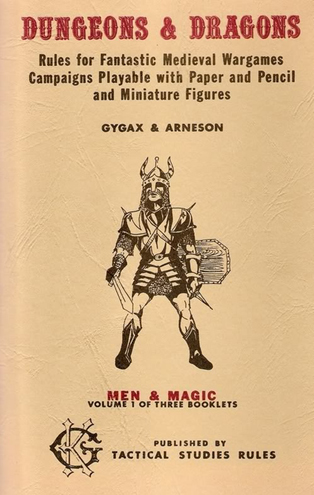 The inspiration for the early RPGs was the Lord of the Rings series by J.R.R. Tolkien and the Conan novels of Robert Howard, so the early games were predominantly fantasy role-playing. One of the first RPGs was a little something called Dungeons & Dragons, which still holds the heavyweight belt for sword & sorcery role-playing. The RPG genre has

expanded to include everything from humor to horror, and there are just as many different rules systems as there are genres. I can only imagine the mental image that’s conjured in the mind of workaday Joes when I mention to them that I’m playing D&D: four or five nerdy fat guys sitting around a basement, wearing cloaks, chugging soda and eating pizza. Maybe one guy is wearing a wizard hat. This was never the case for me in my long history with RPGs. Sure we congregated in basements, but we never wore costumes or brought weapons to a game. We did, however, do voices, act out our characters’ speeches and have an amazing time doing it.

The defining pleasure in playing an RPG for me is in the interactive storytelling. Why settle for just watching Lord of the Rings or Game of Thrones on a screen when you can have your own fantasy adventures, face-to-face with live people? Why only read stories about a daring hero facing off against insurmountable odds? With RPGs, you can step into the role of the hero and revel in the triumph brought about by your own actions and decisions or mourn your own defeat and loss.

These games contain something that any kind of purchased media can never have: you

Tabletop RPGs are less of a game and more of a shamanic storytelling experience where each person is bringing something different to the table, co-creating a world that can sometimes be leagues more in-depth than any novel or film could ever hope to be. These games contain something that any kind of purchased media can never have: you. They contain your imagination, your world view, your humor and pathos and personality. Why settle for mashing buttons and putting predetermined equipment into predetermined equipment slots when you could be crafting objects, spells and weapons whose only limit to power is the length of time you’ve been playing and your own imagination.

I truly enjoy playing RPGs. I’ve played a bunch of them and I continue to play them. If you do as well, or you just want to learn more, stay tuned, because we’re all sitting around the table, dice in our hands, waiting to see what you do next.