Tired and bloodied, you stagger into the next village in search of relief. Passing strangers shy away from you and your companions; your matted hair, clothes drenched with sweat and blood in equal measure, grim expressions. They’d rather not know the horrors you’ve seen. If they weren’t so accustomed to passing adventurers, they’d take one look at you and shepherd you towards the nearest healer, or perhaps the graveyard in the interests of efficiency. But you know where you need to go to rest your weary head: the Inn.


The real magic happens when you sleep.

Videogaming inherited the archetypal Inn from traditional fantasy tropes; in fantasy literature and countless Dungeons & Dragons campaigns, the Inn is the traditional meeting place, from the Prancing Pony to the Wellspring, the Leaky Cauldron to the Eolian, smoky taprooms filled with bands of adventurers just waiting to be approached by shady quest-givers hiding their question-marks under their hats. Yet once videogames borrowed the concept, the Inn became more than somewhere to pass the time: it became a place of wonders, a healing spring of such miraculous nature that it’s perhaps surprising that death or disease in any form continues to exist in such worlds.

Gone are the fancy names, replaced with a simple sign: “INN”. No more witty banter in the taproom, just a handful of one-note locals and an unsettlingly stoic Innkeeper charging a nominal fee for access to a room which just happens to contain exactly the right number of beds for your current party, generously spaced to avoid any embarrassing accusations of human intimacy. Said room might even have a door if you’re exceptionally lucky.

But the Innkeeper and the room are just part of the ritual. The real magic happens when you sleep.

At the risk of making sweeping generalizations, if you’re staying at the Inn, I’m guessing your parents have been brutally murdered and your childhood home burnt to the ground before your eyes? No?Then what about your birthright being stolen and used to trigger a magical apocalypse? Hmm. Then you must be an amnesiac struggling to recall the unconscionable acts you performed earlier in your life. 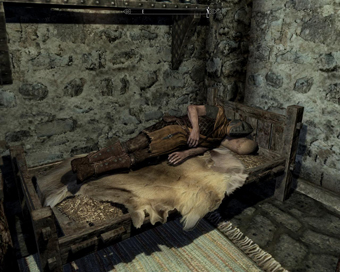 Look, I’m just saying that you’d be forgiven for lying awake at night, staring out the window at the apocalyptic storms ravaging your once-beautiful world, and wondering whether it’s worth even going to sleep if this hellscape is where you’re going to wake up in the morning. Insomnia’s nothing to be ashamed of; frankly, after the things you’ve seen, you’re a prime candidate for sleep either evading you entirely or devolving into a fragmented series of inescapable nightmares, leaving you more tired than when you closed your eyes. It’d be understandable to expect you to lie awake all night long waiting for your maniacal clown/disgraced son-of-a-demigod/effeminate anime-ninja nemesis – who’d like nothing more than your freshly-immolated head on a stick – to come bursting in through the window like Jhonen Vasquez’s Peter Pan.

And let’s not forget the multiple near-fatal stab wounds you suffered from that over-amorous manticore. By all rights you should be yowling in agony all night long like a cat in heat, keeping half the village awake, but this is the Inn. No one ever has a bad night’s sleep at the Inn. Unless it’s haunted, in which case you’ll wake – with the same spring in your step you’d expect from eight hours of restful slumber and a languorous lie-in – just as the specters in question carry off the last of your friends. Or unless it’s proscribed by Old Father Plot that you rise in the middle of the night to overhear some implausibly-phrased expository conversation whispered just beneath your window.

Otherwise, you just close your eyes and drift into slumber like a stone dropped into the Serpent’s Trench, knowing that in the morning, the sun will be streaming in through the window and the birds will be singing in the trees. Or the sun will be glaring at you with baleful fire, the birds nothing more than crispy corpses balanced on dessicated branches, the wasteland beyond the Inn just waiting for its heroes. No pressure. Sleep tight. You’re safe at the Inn.

The door to the taproom hangs open. The Innkeeper is stood at the foot of your bed, watching you. You suspect he’s been there since he showed you to your room, eight hours ago.

Rob Haines is a writer, podcaster & ex-turtle biologist. When he’s not out saving the world – or sleeping off the aftereffects – you can find him on Twitter @rob_haines.

Overpaying the Bills With Too Many Skills
Previous Post