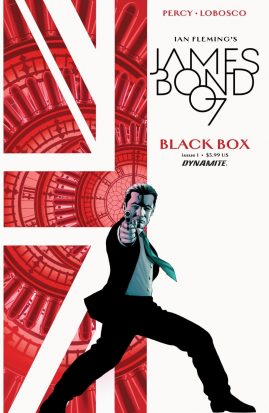 I remain firm of my opinion of James Bond as a shape shifter. He’s malleable. He doesn’t evolve with the times as he’s constantly being blown up and remade. However, the James Bond of Black Box #1 is less of a shape shifter and more of a chimera.

Those familiar with the books will know that Bond isn’t the suave assassin that people like Pierce Brosnan or Sean Connery make him out to be. He’s deeply conflicted, he harbors resentments and grudges, and sometimes he drinks and womanizes to ease a mind constantly working on state sanctioned murder.

But we’ve not seen that Bond too much throughout the Dynamite comics. Instead, Benjamin Pierce’s take feels unearned. Why is Bond such a masochist all of the sudden? Why does he need to feel numb? We watched Daniel Craig desperately try to resuscitate Vesper. We haven’t seen this James really live through any trauma and I don’t think it’s fair to assume that of him. Sure, it’s probably there but why not take the time and show us?

Worse, Bond is kind of boring. This is James Bond doing his best brooding Ethan Hunt impersonation. Modern, old man Cruise Ethan Hunt. Bond should roll with the times but he should also be motivated to do so. Each writer has taken slightly different paths but where is this coming from?

The whole first half of the issue seems unfocused. The wild swings between Bond’s moods and broods doesn’t sit well.

That being said, major tip of the hat to Chris O’Halloran’s colors. For whatever reason O’Hallaron rolls up the ol’ sleeves and pours out a neon wonderland as Bond’s Aston Martin roars to life and leaps out onto the streets of Shinjuku.

In a Miami Vice meets Blade Runner moment, O’Halloran throws caution to the wind and just uses all the colors. All of them. It’s Mardi Gras throwing up after eating 30 bags of skittles and washing it down with a tub of rainbow sherbet. To hell with realism and damn authenticity. Style wins out here. Its garish, bombastic, and bizarre and I love it.

Not that Rapha Lobosco slouches either. It’s almost as if the two conspired to just flip the table over in the last two pages and make them really fantastically good.

Ultimately, sadly, it’s just a few pages. In an issue or two Black Box might find its footing but right now it’s just a few good pages in an unearned wasteland. Almost enough to be left feeling numb. 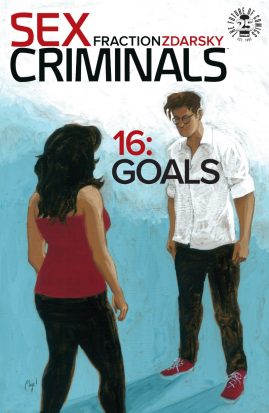 SexCrims is back after an eight-month hiatus, and I’m back to Last Week’s Comics after a small hiatus of my own with an issue that’s two weeks old. We’re all pretty much just making this up as we go along, folks.

Fraction and Zdarsky’s Sex Criminals is that rare book that seamlessly blends very real human pathos with exceptional humor, a heady combination that when mixed well, never fails to make a world and its inhabitants feel extraordinarily real. I feel, at this point, like I really know main protagonists Jon and Suze, and I root harder for their success than any other fictional couple orbiting my various pop culture planets. (That’s no moon, that’s just where I store all my sexy fanfic tumblrs.)

Because of the (too) long hiatus, issue #16 ends up being a perfect place for new readers to jump into the series, as the first eight pages are spent breezily recapping the story in the series’ typically witty style. That wit is welcome since even veterans might need a refresh before diving back in to the story (this old-timer certainly did).

The basic premise: Jon and Susie are a couple who both have the extraordinary ability to temporarily stop time with their orgasms. They begin the series using their shared power to rob a particular bank during these temporal freezes – Susie because this bank indirectly caused the death of her father when she was a child and is threatening to foreclose on her beloved library now, and Jon because he works there and damn the man. They give the stolen money right back to the bank in question disguised as mortgage payments on Susie’s library, lest you think they’re not somewhat decent people. They’re definitely somewhat decent people.

But! There’s also an unsanctioned security force that can freeze time with their orgasms, and they patrol “The Quiet” (Susie’s term) as sex cops. They don’t take kindly to all that sexy-time robbery, and are coming after our duo, hardcore (there are some puns here, and they are intended). Jon and Susie also meet plenty of other regular folk who can reach “Cumworld” (Jon’s term), who become foils and allies alike, and also provide the series with some rich sexual diversity.

After the opening recap, the rest of issue #16 is mainly spent easing us back into the world and Jon and Susie’s relationship. They have a fairly major fight, which is written to be majorly realistic, and manage to come through the other side of it a stronger couple. If that sounds like a dull read, keep in mind Jon and Suze are both genuinely funny people and that Zdarsky has a long-standing custom of peppering his panels with laugh-out-loud visual jokes in the background. Oh, and if it wasn’t obvious, there’s a lot of sex in this book. NSFW. It’s not really safe for public transportation either, by the by.

Between the zippy yet thoughtful writing and gag-filled art, I’ve never read an issue of Sex Criminals that dragged. Even with the micro-focus on the main couple’s crisis, this one is no exception. Welcome back, SexCrims. See you next time.