The second volume of Mobile Suit Gundam Thunderbolt escalates the oppressively “serious” atmosphere established in the first volume by doubling down on the grotesque sights and sordid details that populate the front lines of a war. Desperate to press the tactical advantage afforded by Io Fleming’s dismantling of the Living Dead Division unit, but short on soldiers, the Moore Brotherhood ships out a unit of child soldiers. Backed into a corner, the engineers in the Living Dead Division lop off Daryl Lorenz’s one remaining arm so he can make full use of the Psycho Zaku’s upgraded systems. A father commits suicide, a captain shoots up on drugs to cope with her guilt, a child is given hope only to be brutally gunned down and a subordinate officer murders his commander. The cavalcade of horrors artist and author Yasuo Ohtagaki trots out is certain to leave you numb, but not by careful design.

There is nothing tasteful about these images because, again, Ohtagaki has given no thought to why they might shock us. He only knows that they should shock us because war is bad and dark and grim and people are stupid and callous and evil. This isn’t meant to say that such brutal imagery is “tasteful,” only that it can be treated tastefully. Nor is this meant to be a universal condemnation of the tasteless. Not every work needs to be a devastating expose’ on the horrors of the human condition or a sensitive exploration of our more delicate dimensions. There are moments, hours, days, weeks, months even whole years where our appetites demand the kind of unrestrained thrills that only good trash – trash that knows what it’s doing, trash that revels in its lack of scruples, its angry dismissal of constraints – can deliver. Honor and respectability are often arid atmospheres; too much dries a work out. And work too earnest runs the risk of turning didactic. Or, worse, into unintentional self-parody. 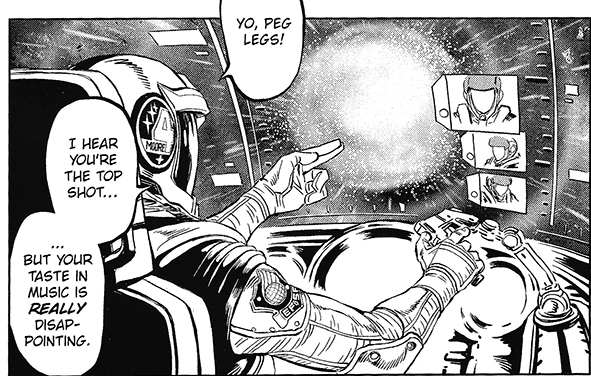 But good trash works because it knows how to avoid the desiccating air of worthiness and the sappiness attendant with too much sincerity. It knows how to take itself a little less than seriously, knows that it can’t provide both a frivolous good time plus absurd ultra violence that’s supposed to amuse, and then act shocked when the ugly reality implicit in these elements reveals itself. Good trash works by knowing when to suspend all those careful observations. It knows, in short, exactly what it wants to be. Mobile Suit Gundam Thunderbolt does not, not even two volumes in. In one moment we’re supposed to find the brigade full of children and Io’s annoyance with their presence a kind of joke, when the next we’re supposed to regard their senseless slaughter as a tableau straight out of hell. If we’re supposed to take Captain Claudia’s drug abuse seriously, why is she framed in deliberately sexual terms and in her underwear? The story is a tonal mess that knows irony can be used to underpin horror to shocking effect, but has no clue how or when to implement said irony. 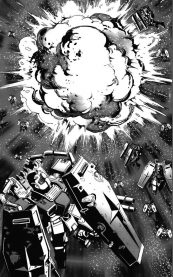 Meanwhile, the only narrative technique it seems to possess is escalation. It makes no sense that Daryl, a pilot famed for his skills as a sniper, would suddenly find himself a cracker-jack skirmisher when handed the Psycho Zaku, nor any sense that the Zeonic scientists would waste their time installing state-of-the-art technology into a suit as ancient as the Zaku when they had a number of current generation suits on hand. There was never any indication that the Thunderbolt Gundam was so powerful a suit it could actually wipe out entire flotillas on its own; if that were the case, why ship it off to fight in side battles at the very close of the One Year War? And why, exactly, end the volume by killing off every side-character, leaving our two heroes stuck in a battle they now no longer have any great personal investment in? It’s likely that this will feed into larger themes about the senselessness of conflict and revenge’s cyclical nature, but I have little faith Ohtagaki will find his way to trenchant observations through this. The man barely even knows how to make giant robots blowing each other up seem fun; how much more difficult would it be to make this spectacle seem deep?