I’m still not really sure what to think of Sex Criminals. I know I like it because it’s Matt Fraction, and even for him the series is quirkier than normal, but it’s also raw, perverted and odd. The comic is about two people who, in mid-coitus, can stop time. This opens up possibilities for less-than-reputable activities, and even though Fraction hasn’t pulled back the curtain on his world yet, he’s introduced enough to keep readers intrigued, if a little uncomfortable. 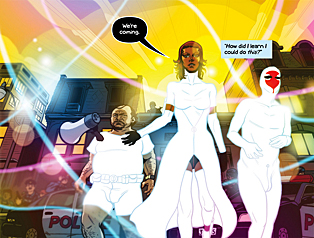 As usual, Fraction is a bit too clever. His writing snaps, but almost with a forced craftiness. In Fraction’s world, everyone is punchy and quick-witted, which makes the writing groan-inducing at times. The novelty of the concept wears off in the second issue, and what’s more interesting – and still kept at bay – are the people who also have the ability to stop time, and the people whom the main characters, Jon and Suzie, are trying to escape.

That said, Fraction’s characters are truly engaging. Using Jon as a vessel for the adolescent hormonal libido, Fraction captures the male preoccupation with sex and the weird world of pornography. Clearly, he has a lot of fun creating names of adult movies, and the book is worth reading for the background images and titles.

Plus, we see that Fraction’s a real sicko.

Chip Zdarsky’s cartoonish design softens the more sexual aspects of the comic and probably keep it from being sealed in a black poly bag. For as dirty as it gets, the material never becomes too graphic, and Zdarsky is to thank.

Now that Fraction’s laid his base, I’d love to see more of the plot involving a botched bank robbery and a group of three mysterious enforcers. He does a good job of giving half the comic to the background and the other half to the present, but after two issues, I feel like we have enough to move on.

But if you’re interested, Sex Criminals is worth the read. 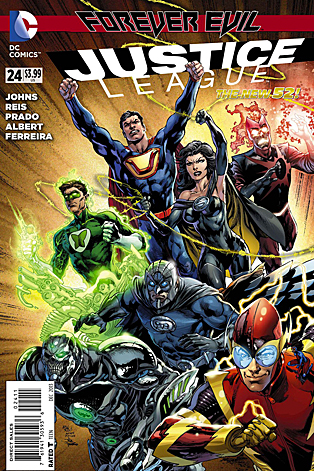 I dig Ultraman. I love the completely inverted version of Superman, but not in the Bizarro sense in that he’s still good, just odd. Ultraman is evil and terrifying, and the threat he poses to this world is definitely fleshed out in Justice League #24.

Geoff Johns gives us a startling origin for the character, as the first half of the issue shows readers how Ultraman developed into the beast he is. Taking everything beloved about Superman and upending it, Johns builds a past for the character that defines him, particularly in the context of Forever Evil.

The more harrowing parts of the issue occur when Ultraman shows up at the Daily Planet and confronts Jimmy Olson, who, in Ultraman’s world, has wronged him severely. His intensity and ferociousness, though, are really a credit to Ivan Reis, who uses shading and shadows with impressive results. Plus, Johns builds up the character’s unpredictability enough that I thought we were going to see the end of Superman’s Pal, Jimmy Olson.

He would have definitely died a painful death.

Besides drawing an awesome Ultraman, Ivan Reis’ illustrations capture all of Johns’ intent. Many pages have multiple panels, yet each one – regardless of size – is sharp and detailed. Plus, when Black Adam shows up, Reis builds the tension as Shazam’s arch enemy realizes that he may be dealing with a completely different villain than he’s ever faced before. While I wouldn’t say Reis depicts Black Adam as fearful, he definitely captures his surprise well.

For a concept that seemed mediocre, Johns has successfully made Forever Evil a worthy read, particularly in how well the tie-ins have built the story and expanded Johns’ concept. Plus, this kind of issue makes Superman’s eventual return all the more exciting.

As long as he returns.

Until that happens, evil rules, and we get the chance to enjoy it. 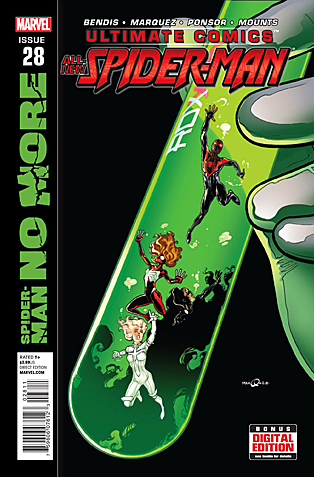 Bannen’s Book of the Week: The climax of Brian Michael Bendis’ “Spider-Man No More” arc isn’t what I’d call explosive or even action-packed. But it is heavy on emotion, solidly executed and a great way for a great character to return to action.

Unlike almost any other writer in the comics world, Bendis has an ability to capture and transmit character emotions with power. When Donald Roxxon, the owner and CEO of the corporation, mentions Miles’ mother, readers can feel the rage surging off him. You want Miles to react, want to see him channel all of his sadness and anger into one solid punch.

His actions aren’t as satisfying, but they are those of a hero, and this is what Bendis really elucidates in this issue. Miles is a hero, and that is why he’s Spider-Man. Not because he was bitten by some genetically engineered spider. The result of the issue is not as cathartic as you want it to be, but it’s one of Bendis’ cleaner endings.

Additionally, Bendis drops a ton of hints for the future of the series. If you thought the man was out of story ideas, he blows the doors off of his future work on Ultimate Spider-Man. Even if he were to address one of his concepts every few issues, it would still be another 100-plus issues before he could ever fully cover everything he hints at. There are definitely major conflicts ahead for Ultimate Spider-Man.

David Marquez’s art is just a thing of beauty. His character designs are so sharp and so clean that every image is a polished perfection. Bendis has a lot of story to tell, and Marquez helps him out by drawing panel after panel of solid imagery. And Justin Ponsor brings the images to life with his colors, which are vibrant and gorgeous. I can’t say enough positives about the artistic team – to me, they deliver the best-looking comic every month.

I had read rumblings of the end of the Ultimate Marvel universe, but Brian Michael Bendis quickly put that to rest with a quick (and cutting) Twitter response when he wrote, “The Ultimate universe is not cancelled! the concept of legit comics reporting is though.”

Lucky for us, Bendis shows that he still has many more stories to tell and no plans to step away from Ultimate Comics Spider-Man anytime soon. As far as I’m concerned, he never should.

No one writes Spider-Man this well.