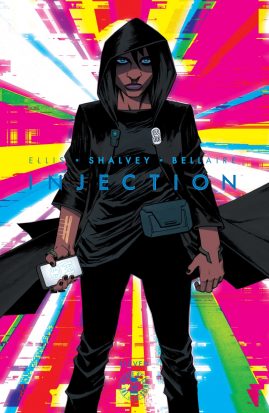 Injection being back is like an old friend being back in town. But not the kind of friend that’s chill and happy to just hang out with you as you go about your normal routine. No, Injection is like the friend who rolls into town like a slow drizzle before devolving into a downpour.
I’ve read a lot of slow boilers by Ellis and Injection is among the slowest. Nothing of consequence happens in the entire issue but somehow it still manages to be an enjoyable trip back into familiar territory.

That being said, everything about Injection is consistently unfamiliar. The heart of Injection has always lived a bit out of focus. It constantly feels as though it should be around the next corner or behind the door but in each issue has denied readers the satisfaction of certainty. And that’s kind of fun. I’ve lamented other books not getting to the point but Injection feels more about the journey.

It’s also wildly fun to see each character get to take a turn in the limelight. Brigid is essentially a too cool for school technomancer with undefined powers and knowledge. That’s fine. Nothing about Injection is defined; magic and technology hold hands as they walk towards the apocalypse.

But Brigid’s form of grumpy is differently aggressive than we’ve seen before. She’s more than no nonsense, she’s constantly on the edge of violence. The tension she brings to a panel is almost purely violent as well. Though she’s a brain, the thing I’m constantly waiting for is for her to draw her knife. Or at least toss someone across the room. I know she’s a brain, now I want to see the brawn.

Declan Shalvey also does great work here. The way the eye is drawn through a page is just a joy. I typically read digitals on an iPad but the way Shalvey plays with panels is too good to use any sort of guided view. For instance, Shalvey’s slow builds and zooms are a joy for anyone who can appreciate an establishing shot followed by a slow peeling back to the important details. Start with a house, then a room, then a person, and finally the tiny detail that brought us here.

Of course, the eye is also drawn to Jordie Bellaire’s wonderful colors. Early on there’s a night scene that plays with color in smart ways. Little touches like how the panel goes dark when the flash light is first introduced and then lightens as our eye adjusts are fantastic. Or how in the same sequence where Shalvey is slowly zooming in, Bellaire points to several different elements all at once through bright pops of color. First, they’re red herrings, then the main course.

Injection #11 is the most beginning of start points. It really gives us very little. But we’ve been here before and that’s okay. I trust that it’s going to get weird and going to be alright. 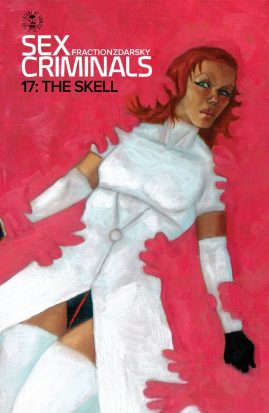 SexCrims is coming at us every month like clockwork, thanks to the careful and dedicated planning of Fraction and Zdarsky. No more eight-month hiatuses for these two! This is a very good thing, as Sex Criminals remains one of the best books on my pull list.

Issue #17 is a focused look at Jon and Suzie’s arch-enemy, Sexual Cop Myrtle Spurge. With a name like that, what other profession could she possibly do? Well, reception at a regular, everyday police station, it turns out. This issue reveals all the Sex Cops are working their sex beats (heh heh) as side hustles to their day jobs.

Of particular note is the title splash page guest-drawn (sort of) by Ed Brubaker with an elegant assist from regular SexCrims artist Chip! Elizabeth Breitweiser also steps in for a colorist guest spot, which nicely sets Myrtle’s story apart from our ongoing adventures with Jon, Suzie, and friends. I must admit, I missed seeing the two protagonists after having just been reunited with them last month, but this issue still offers a compelling look at their antagonist, and serves to humanize her a bit, too. Jon does have a brief cameo at the end.

The issue is loosely modeled after an episode of Law & Order, and even has a meta shout-out from Fraction at the beginning saying as much. We get an insider look at a typical day in the life of Myrtle Spurge, and are privy to her notes and thoughts on a sex criminal she’s currently profiling and tracking. She’s not just hyper focused on Jon and Suzie, then. Though, I’m a little confused at what crimes the “criminal” she’s tracking here has actually committed, besides having some interesting, yet harmless, sex totems appear as extensions of himself whenever he disappears into “the quiet.”

Spurge wants to “swab him out,” which insinuates that he’s disruptive and/or unclean, but ultimately that says quite a bit more about her need for order and control than whether or not relatively mild kinks should be seen as actual crimes in the world of Sex Criminals. I certainly don’t think they should be seen as such here in ours.

The aforementioned Jon cameo serves to bring Myrtle’s target into the inner circle of Jon and Suzie’s compatriots, and we get a hint that we’ll be seeing more of him in upcoming issues. From the looks of things, Jon and Suzie might slowly be rounding themselves up a cavalry. Ride on, y’all.