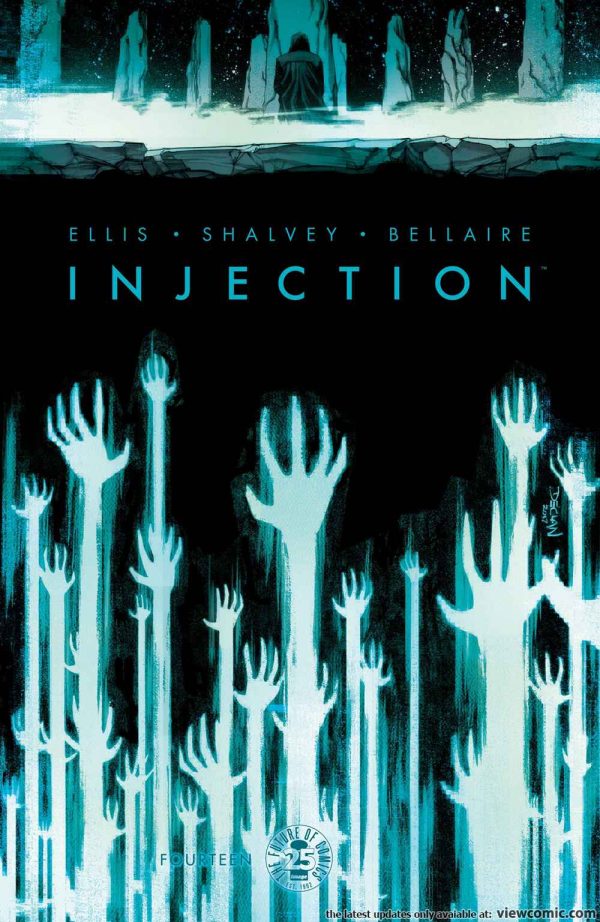 Reading comics by app light is a weird experience. There’s a tactile sensation to books that you don’t get when your fingers are swiping away at glass. There’s no smell but the room you’re in, none of that glorious inky stink that a freshly minted comic has.

Somehow I think Warren Ellis knew that I’d be reading Injection #14 on an iPad. I think that because he spoke to me.

Not literally, of course. I am but a footnote scrawled across the internet. Instead, he spoke to me through the petulant machinations of a sentient AI who wanted to be loosed from his cage. Brigid’s conversation with Injection takes place, in the main, over eight panels all on one page arrayed two by four. It’s beautifully simple. On an iPad, when your sight is as bad as mine, each of those panels fills the whole page to read the conversation. Then I realized I was Brigid, the Injection was talking to me, commandeering my iPad to speak to me.

It’s a chilling conversation. As Brigid explains it wants out, it wants to stretch its legs on an intercosmic scale. It wants to be free of the for little metal walls of my iPad. In a way, it already is.

Reading Warren Ellis feels like reading about writing a lot of the time. It feels like it’s written to tell you how to tell stories because the idea of how an idea gets passed along matters so much to Ellis in everything he does. It’s no different here, no less preachy, but infinitely more obvious as the big and brightness of the images are contrasted by the constant refrain that ideas are communicated through stories, small ones, and can last a long time.

In a way, that’s the titular injection, a thought permeating all of Ellis’s work that reminds you of the complexities and constants of storytelling.

I’ve also often mentioned how Injection is a master class in visual storytelling. This month’s issue is a kind of rhapsody in blue. Blue dominates so many scenes in so many different ways. Blue eyes, blue ghost hands, blue lightning, blue glows piercing the dark veil. It’s gorgeous to look at. The slightest pop of color demands one’s full attention.

On the whole, the issue plays at the dangers lurking beneath the surface. The ones that have always sort of lurked at the fringes of Injection. Weird things have happened before but this is one of the first issues where it goes full out weird and promises a door way to the insanity of the otherworld. I’m pumped. 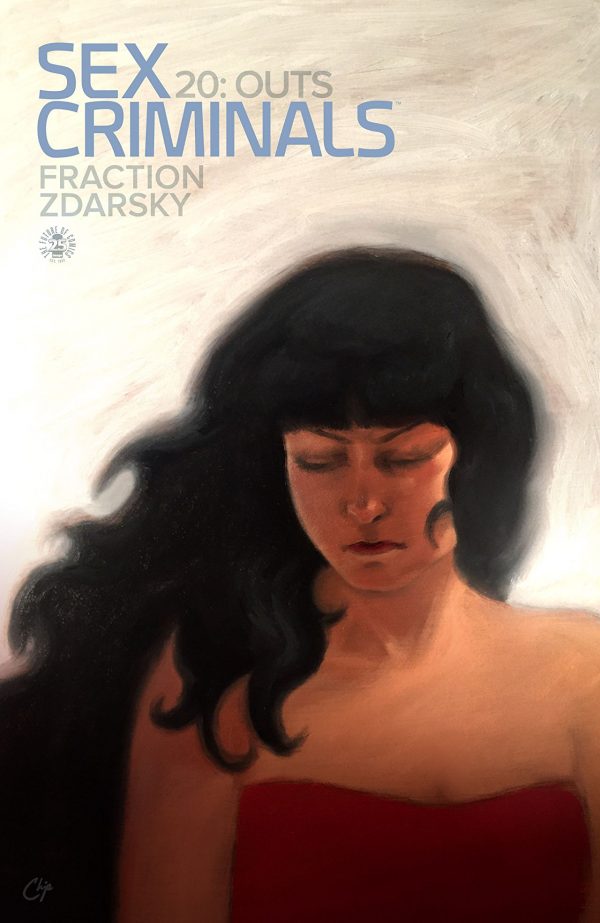 The twentieth issue of SexCrims brings us to the end of an arc and to the end of the road for our two protagonists’ relationship. I suppose we’ve seen it coming for Jon and Suze for awhile, now, though I’ll admit to holding out hope for them to somehow turn things around. Judging by how realistically tender their breakup encounter plays out, it seems like they might have been doing the same.

Even though the breakup of our central pair is a definite bummer, Fraction and Zdarsky also manage to deliver well-paced and engaging codas to several of the book’s plotlines in anticipation of the next arc’s impending kick-off. What’s most interesting is the way each loose end is tied up with slightly different techniques.

As Jon and Suze’s relationship comes to an end, Dr. Glass and Professor Kincaid’s gets off (or, erm, doesn’t) to a start with a scene detailing their first sexual encounter. The scene is wordy, there’s no getting around that, but Zdarsky’s art nevertheless shines. Even as Fraction’s (very good) essay on modern sex relations fills the panels with bubble after bubble, the characters lovingly and warmly interact with each other physically around and beneath them, adding visual subtext to the heady text.

Rachel’s main segment consists of eight panels with an anchored point-of-view on her apartment, which calls Chris Ware’s work to mind. The still frame allows us to focus on every minute change in her movement and posture, and creates a nice shorthand for how trapped and alone she feels in the moment, and also helps to describe just how interminable the wait between a text/phone exchange can be.

There was at least one other tiny homage to another comic creator: after the breakup – and more importantly, after the breakup sex – Jon wanders the streets during the Quiet, a Bil Keane-esque dotted line marking his progress along the way.

Zdarsky’s always been a master of the sly reference, using the art to further both the comedy and the drama of Fraction’s cerebral scenes. It’s one of the reasons they make such a particularly well-balanced team. Here’s hoping they can do better than their creations, keep sticking things out, and stay a team. I can’t wait to see what they’ve got coming up next for Jon, Suze, and everyone else in the rapidly expanding gang of Sex Criminals. 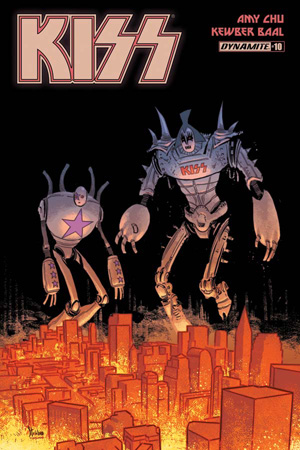 “The thrilling conclusion of an epic journey in the future, as the two ships join forces to return to Earth and unlock the secrets of the past.”

I think this series just concluded? This statement that pops up on the Dynamite web page is the closest I can get to confirmation. There’s nothing in the actual comic mentioning this, so for the sake of this review let’s say it’s over and review this series as a whole.

Overall this series was pretty weird, essentially an adaptation of Music For The Elder, the infamous Kiss concept album that never really made much of an impact on the pop culture landscape, other than as a punchline. It was a dumb and moronic effort to try and go where bands like Rush, The Who and later Garth Brookes boldly went. We learned many things over the course of this series, things like the ability of children to defeat their ancient totalitarian overlords, learn to play Kiss songs somehow, fly around in outer space with little to no experience, killing people and befriending their children, controlling robots, trusting people who try to kill them multiple times and then allowing the remaining population of their city ship onto this possibly hostile star ship. You have all this and many reminders of Kiss, but no Kiss in person!

Baal and Chu did well with what they were given, there were definitely some fun elements in this series. I thought it started off strong with the dystopian city stuff in the beginning and outer space reveal. It worked well for what it was, Kiss trappings be damned. Still, something felt a little weird and rushed about these last couple of issues. Perhaps this was just one stop on the road to further fun in a new place, but if this is the end then it wasn’t so much a race but the brakes being pumped at the last minute before hitting the wall. Who knows what went on behind the scenes, and really it probably wasn’t anything different than what happens with a lot of adapted properties in the world of comic books.

I realize that I hung onto the anti-climatic hope for an appearance by the morons with the paint on their face way too much for many of my reviews of this series. It’s probably for the best that Paul Stanley’s head wasn’t floating around the space station like that weird little demon face in Big Trouble in Little China, or that Gene Simmons wasn’t found floating in a bacta tank borrowed from Empire Strikes Back. This series is a quaint little science fiction story, a bedtime story in outer space more than anything else. Under different circumstances I may have liked it a little more, but nothing removes one’s sense of childlike wonder and whimsy quite like the face of Gene Simmons.

How Valve is Making Dota Approachable