The horror stories of legendary mangaka and fearmonger, Junji Ito, have always repulsed and fascinated me. His works often combine the most gruesome of body horror and eldritch abominations, while scattering in elements of surreal humor. One such story is The Enigma of Amigara Fault, in which human-shaped holes on a deep fissure of Amigara Mountain are compelling people to enter them, even though they don’t really want to. What happens on the other end of this hole is pure nightmare fuel, while striking fear into those with claustrophobia.

What is most distinctive about Ito’s manga is how morbidly and disturbingly lifelike his drawings are, even while portraying the most macabre of scenes. In Uzumaki, the denizens of a small town became so obsessed with spirals that some of them even tried to distort their own bodies into the shape. This resulted in some bone-chilling images featuring the sheer malleability of the human body—scenes that might surface in your dreams tonight. 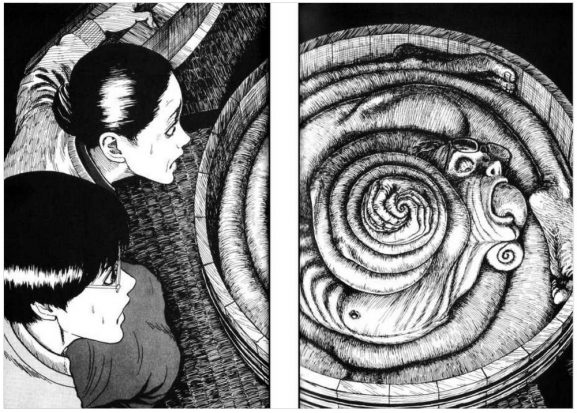 If tearing your eyes off Ito’s stories is impossible, then you may take to Kyofu no sekai, a card-based videogame about cosmic horror, influenced by Ito’s works. In this title, horrifying eldritch creatures known as the Old Gods are threatening Japan, and you can choose from a bevy of characters—each with their own strengths and weaknesses—to solve several bloodcurdling mysteries before an apocalyptic event strikes you dead. This is done by travelling to different locations, while experiencing random events that can either give you a much-needed boost, or sap your energy. Abilities and spells can be earned along the way, and depending on your character, you may even earn bonus points from their sadistic pleasure of killing and hurting things—just like the protagonists and victims in Ito’s stories who, despite their unfortunate circumstances, are usually no moral paragons. Battling with terrifying foes such as headless bodies, a monstrosity filled with strange holes and a masked assailant who will pummel you to death with a baseball bat, are also par for the course in the game, although running away from them may be a better idea. 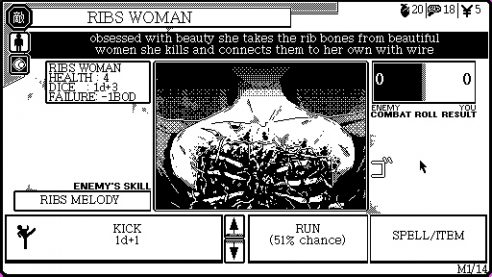 Kyofu no sekai may still be in development, and many parts of the game are still incomplete, but the demo has captured the enigmatic spirit of Ito’s stories extraordinarily well. The eerie atmosphere so reminiscent of Ito’s works is present in the scenes of inexplicable terror, occult happenings and stalking by crazed maniacs watching you from afar—complete with spine-tingling background music. On the other hand, instructions can be difficult to follow, and I sometimes find my character unexpectedly passing out because I didn’t realize I was running out of Stamina or Reason. But given that the game is still in development, I am sure these kinks will be ironed out when the full game is released later in the year.

It’s high time we see a game that brings Ito’s intriguingly macabre stories to life, and Kyofu no sekai looks extremely promising. Since we are never going to get that cancelled Silent Hill game that Ito was reportedly involved in, this could be the next best alternative. Play the game, spend the rest of the night on a Junji Ito comics binge, and fall asleep with your eyes open.

Junji Ito, Kyofu no sekai, The Enigma of Amigara Fault

The Road to Pokémon World