In This War of Mine’s war-torn world, depression is a constant companion. Fear of bandits, sickness and starvation contribute to a deep-seated hopelessness that most of us are fortunate enough never to experience. If that hopelessness gets too overwhelming, depression sets in, with survivors losing the will to walk, to eat, to even get out of bed. It makes for a harrowing depiction of the effects of war on those who never set foot on the front lines.

On the surface, incorporating depression into This War of Mine is commendable. It is a powerfully debilitating condition, one that rightly stands on equal footing with physical sickness and injury. Unfortunately, the way This War of Mine handles it leaves a lot to be desired.

When a character falls into the ‘depressed’ state, there are three main ways to draw them out: drinking, talking to others and sleeping. Each of these approaches is deeply flawed. Drinking, for instance, is often associated with depression, but rather than helping it, alcohol masks the symptoms while making the condition worse. Depicting booze as some sort of mental medication is irresponsible at best, especially when the only side-effect is a minor case of temporary drunkenness.

In contrast, the notion of treating depression by talking to people is a far more grounded representation of mental health. For as much help as antidepressants and other medication can be, deconstructing the root causes of depressive thoughts is the only way to truly get them under control. This is no easy task, which is why it can often take years of professional therapy for sufferers to feel comfortable with their condition–and that’s if they ever get to that stage at all. Proper therapy involves a whole host of cognitive techniques and behavioral exercises, and determining which work for you is part of what makes a good therapist. This is where This War of Mine falls short. 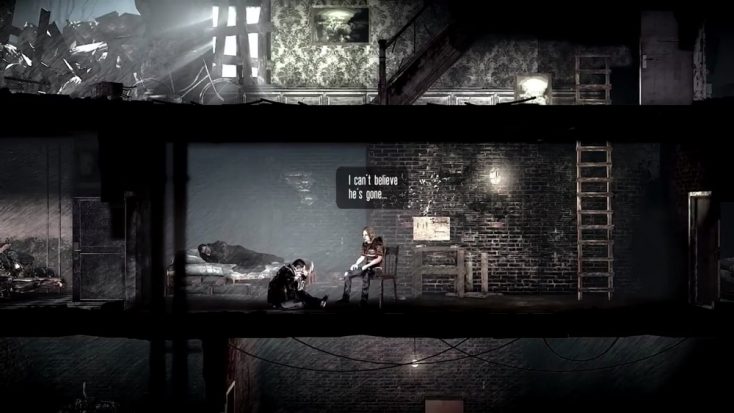 Conversations regarding depression amount to little more than token consolation, the kind that wouldn’t be out of place in a Disney movie. ‘Don’t give up’, ‘We must help each other’, ‘It’s hard, but we are in it together!’ Admirable sentiments, sure, but utterly ineffectual to anyone suffering from the kind of depression survivors in This War of Mine deal with. The idea that a few generic words of encouragement could wash away that despair is more than a little far-fetched.

Sleeping as a salve for depression is another troubling choice. Lethargy is certainly a big part of depression, with sleep providing a temporary refuge from the aches of the waking world. Collapsing into bed, or never getting out of it in the first place, is a constant temptation when life seems particularly pointless, but giving into it rarely solves anything. Too little sleep can exacerbate depressive thoughts, but so can too much, leading to a self-perpetuating cycle of exhaustion and unwillingness to engage with life.

Sadly, This War of Mine fails to acknowledge the dangers of oversleeping, treating rest as a magical panacea with no side-effects whatsoever. Holing a depressed survivor up in bed for a couple of days miraculously elevates their mood, despite the fact that the loneliness and lack of activity would have driven most sufferers deeper into apathy and despair. This paints depression as something you simply get over, a psychological cold that time alone can heal. It’s this kind of misperception that fuels so much of the stigma surrounding depression, and it’s disappointing that This War of Mine propagates such a shallow image of a deeply serious issue.

To be fair, depression isn’t the only condition simplified for the sake of the gameplay experience. Physical injuries enjoy a similar impotency, with broken bones and bullet wounds healed by bandages and bed rest. These wounds aren’t plagued by stigma, though, and few people would honestly believe a piece of cloth could mend a fractured leg. Depression, however, remains severely misunderstood in society, and This War of Mine’s trivialization of it only hinders the progress of mental health awareness.