For the first time since I got a new job I’ve been able to play Pokémon Sun in earnest. I’d managed to complete the first island before I started work but alas, it was not until now that I was able to pick it up again.

Many have praised Sun and Moon for the drastic changes to the tired Pokémon formula. Let’s be honest, breezing into a town, kicking someone’s ass to claim their badge, and then level grinding had overstayed its welcome.

I love how Sun and Moon integrates the journey of becoming the very best into becoming acquainted with your new living situation. Moving to a new place is hard, scary and its really difficult to make friends. Alola looks nothing like anywhere else in the PokeVerse, and having a quest that’s all about helping your neighbors is a great way to get acquainted.

Unlike any Pokémon before, this one revels in the relationships between characters, Pokémon and nature, and that’s beautiful. Normally I’d be prone to griping about this. Yes, the game holds your hand a lot. Yes, there is a lot of dead end dialogue. But for once Pokémon is at least generally aware that there’s more to Pokémon that bravado and glory.

This may not be the Pokémon game of the future that I theorized but it’s a step in that direction. It’s a game that admits that life tests you in stupid ways and sometimes being neighborly, charitable and just there are all it really takes to be successful. Sun and Moon finally realize that sustainable living is not a radical notion.

Pokémon Sun and Moon don’t even really prize strength. Take an early rival battle, for instance. Your rival is someone you’ve known for maybe a few hours. No long history, no animosity, just someone that’s super pumped to have someone to engage in the ancient art of Pokémon battling. And everyone in the town is jazzed to see this. 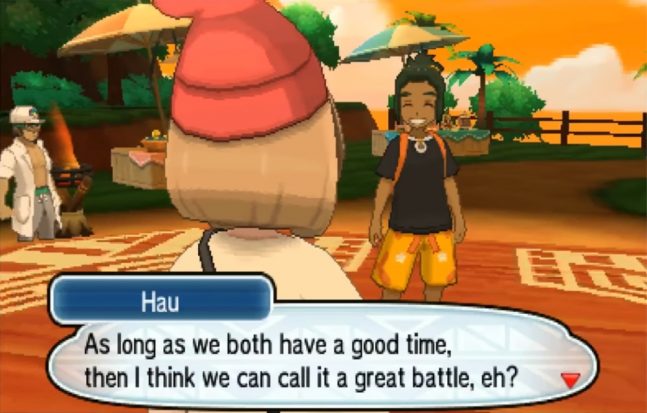 All of this obviously comes as a shock to me. I sat down to write a post deriding the hand holding and the talking. I have a scant few hours to play a week and I want to get the most of them. But I’ve realized that Pokémon Sun and Moon is a balm in a sea of aggression.

Sure, battling your imprisoned companion is still the main mode of action but this feels like a first step towards my mythical, all-encompassing Pokémon World game. Never before have we been asked to clear out the local fishing hole with basically no stakes or consequences. In previous games, evil empires threatened the world. In Alola, it seems (so far) like life would just go on. Life on the islands is truly a different pace.

So like Dragon Ball XenoVerse 2, this game has found its way into my hyper limited play time. It rewards stopping to smell the flowers, catching the Pokémon that lurk in the tall grass next to the flowers, and helping an island captain clear some gutters or whatever.