By virtue of their roll-and-move mechanics, Mario Party boards traditionally feature chance more prominently than strategy. But the best boards often boast design choices that add some degree of control, such as the investment and plot-ownership battles of Windmillville (Mario Party 7) and Koopa’s Tycoon Town (Mario Party 8). These can go a long way towards preventing the base luck factor from becoming draining on the whole experience.

Some boards, however, are doubly luck-driven, in that the design caters to happenstance encounters over deliberate navigation. Mystery Land from Mario Party 2, recently re-released on the Wii U eShop, seemingly follows this inclination.

The board is broken into four isolated, looping circuits where Happening Spaces are the primary means of transportation, warping you to other areas of the map in a clockwise fashion. Each island has three to four of these spaces, so the chances of you landing on one are somewhat favorable. But that’s part of the problem — accessing other areas is relegated to chance, rather than choice. Moreover, if your intention is to remain on an island so as to reach a Star Space, Happening Spaces can be a real pain.

It’s odd, though…Mystery Land is essentially a follow-up to a board I can’t stand — Wario’s Battle Canyon from the original Mario Party — yet despite the similarity in scope and the notable luck factor, I still find Mystery Land enjoyable. 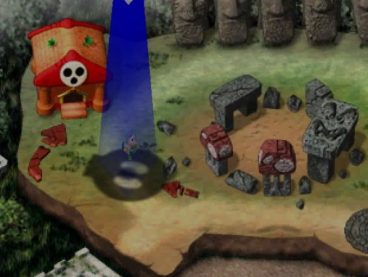 I feel I don’t have any say in movement when playing on Wario’s Battle Canyon, being at the mercy of cannon spaces which fire you to randomized landing points. Mystery Land, on the other hand, offers more mechanisms for manipulating and circumventing the luck factor.

Shy Guy huts, for example, give you the option of cursing a player (including yourself!) for the price of 5 Coins. Curses limit the victim’s next die roll to a 1, 2, or 3, which can effectively mitigate competition for a Star — or, in the case of self-inflicted curses, give you greater odds of landing on a desired space.

The Item Shop in the second area also offers an effective countermeasure in the way of low-cost Skeleton Keys, which can unblock the only route offering choice as to the direction you wish to travel. It’s very likely that you’ll reach the Item Shop before being sent away by a Happening Space, but even if you miss it, the board compensates with additional Item Spaces (at least one in every other area). By summoning UFOs for 10 Coins at marked locations, players also have the possibility of warping to an opposite area without having to land on multiple Happening Spaces, though this can also backfire. 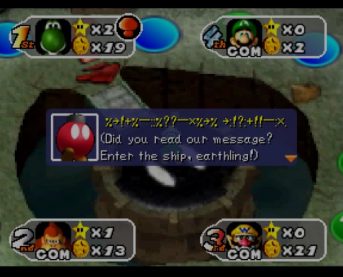 Mystery Land can be very unkind, but it’s not irredeemable because of its tough-to-plot-a-course setup, not when there are elements that help counteract the hold luck has on the overall fun factor. I’ll take this map over a weaker, luck-driven counterpart like Koopa’s Seaside Soiree from Mario Party 4 — which, for a map with a tropical setting, is ironically dry.

Granted, Mystery Land had to grow on me, so it may take multiple plays before you can find a happy medium with what may be irksome nuances. It’s not my favorite map from Mario Party 2, but despite prior misgivings about the setup and my preference for more strategic maps, I don’t object when Mystery Land is suggested as the board of the day.

A Love Letter to the Wooden Cube

The Road to Pokémon World