Pokémon has long been plagued with an identity crisis. Themes of friendship, teamwork, and overcoming adversity clash with the subjugation of sentient creatures and the glorification of pitting them against each other in brutal combat. Attempts to justify Pokémon battles as a sport Pokémon actively enjoy fall flat when you see Pikachu whimpering in pain. Sure, Pokémon ‘only’ faint when they’re defeated in battle, but as you’ll know if you’ve ever experienced it for yourself, fainting isn’t particularly fun. The Pokémon games even directly acknowledge this, with your Pokémon becoming less friendly to you the more often you let them pass out. Nevertheless, the games continue to sell the dream of becoming the very best through forceful superiority, encouraging you to treat your Pokémon as weapons instead of the friends the greater narrative insists they are.

Nowhere is this contradiction more evident than in the latest games, Pokémon Sun and Moon. They start out promisingly enough, reframing the traditional choose-your-starter-Pokémon moment as a mutual contract between you and your chosen Pokémon, instead of the one-way transaction it’s been in the past. Unfortunately, the touching moment soon gives way to the typical gameplay loop of pounding wild Pokémon into submission, trapping them in tiny balls against their will and forcing them to fight for you whether they like it or not. After such a laudable attempt to place you and your Pokémon on equal footing, the position of domination you default to for the rest of game only stands out as more hypocritical than ever.

Contradiction flows through your companions, too. Lillie, a young girl who you team up with early on, loves Pokémon but hates seeing them get hurt. She frequently comments on the brutality of Pokémon battles, avoiding encounters with wild Pokémon through the copious use of Repels. Yet despite her vocal opposition to violence, Lillie not only sticks by your side for the entire game, she often provides healing for your team to aid them in battle. Her hypocrisy comes to a head during the game’s epilogue, where she decides to travel to Kanto, the world of Pokémon Red and Blue, to learn how to become a trainer in her own right. The game offers no believable arc leading up to this, no moments of personal conflict to sell Lillie’s transition from Pokémon pacifist to eager battler. She simply has a sudden change of heart, apropos nothing. It’s a lazy dismissal of the complex issues the game flirts with. 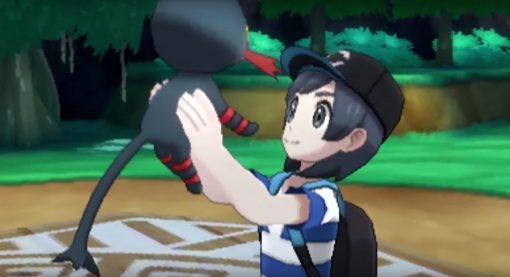 Even the game’s cartoonish villains challenge the foundations the entire Pokémon universe rests on. Lusamine, the ‘final boss’ for as much as the game has one, is condemned for her obsession with freezing Pokémon for her collection, ‘protecting’ them for all eternity. The game frames this as an evil act, and yet later on, Lusamine points out that her actions are no different to that of a Pokémon trainer. Trainers capture Pokémon by force, carrying their favorites into battle while the rest are trapped in limbo inside the Pokémon Storage System. They steal creatures from their natural habitats and use them as tools to further their own ambitions, never once considering whether the Pokémon obey because they want to, or because they have no choice. What makes your actions right and hers wrong? Sadly, the game brushes this conundrum away without so much as a second’s consideration.

The thing is, there’s a way to make a Pokémon game that doesn’t feel so at odds with itself. Game Freak has even started taking steps in that direction, including in Sun and Moon a Tamagotchi-esque mini-game, a pseudo-Pokémon Snap camera mode, and an assortment of puzzles based on using Pokémon abilities outside of battle. These non-adversarial mechanics hint at a world where Pokémon are more than weapons, where a player could make a name for themselves not through violence and subjugation, but through kindness and cooperation. Forget the traditional Pokémon formula, Game Freak; I want to be Pokémon Partner, not a Pokémon Master.

Dating Pugs in Hot Date Reminds Me of my Social Anxiety