Injustice 2 is simultaneously the peak and trough of a what a fighting game’s story mode can achieve. The game plods through some of the most poorly paced writing and moments in anything I’ve ever played. There’s no way around it, when the only card you can play is “and then these people fought” you’re played out by the second or third fight. Injustice 2 has 76 fights.

Super punching and kicking aside, the story is massively contrived. Characters appear to get their butts handed to them by the player (or spike the difficulty) only to vanish without a second thought. I had fully forgotten some characters were even in the game because they only have one meaningless appearance. That’s not a good way to tell a story. One-timers like The Simpson’s Lyle Lanley burn their way through the chaff through good writing, acting, and a contagiously memorable song. Atrocitous is forgotten as soon as he arrives.

That being said, Injustice 2 does something few stories are willing to do. It refuses to redeem its most fallen character.

For those who don’t remember, Superman became a planetary dictator when the Joker tricked him into killing a pregnant Lois Lane. Then Superman killed the Joker who, unbeknownst to Superman, had a nuclear weapon in Metropolis on a dead man’s switch. In his opening monologue, Batman is clear that he understands why Superman did the things he did but reminds everyone that understanding isn’t condoning. In Batman’s own words, every villain is the hero of their own story.

Darth Vader doesn’t think he’s the bad guy. He’s a hero who destroyed the corrupt and poisonous Jedi. Hannibal Lector is purging the world of the rude and saving a bit on his grocery bill. David Mitchell only just realizes that he’s one the baddies because of the skulls that adorn his uniform. Of course, they all thought they were morally justified, that’s not surprising. 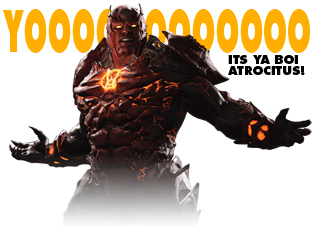 What is surprising is that after Batman and Superman team up, they don’t stay teamed up. As soon as the threat of Brainiac is over the knives get drawn again. Superman has not only learned nothing from his brief stint in prison, he doubles down. If he had been in charge, Brainiac would never have killed all the people Batman couldn’t save. It’s that simple and somewhat heartbreaking. For a brief moment seeing Batman and Superman work together made it seem possible Superman would come to his senses. Instead, he punches his best friend in the face.

With seemingly little effort, the team at NetherRealm Studios wrote a much better Batman vs. Superman story than the movie or their first attempt. Seeing Batman and Superman team up and work together is a great moment, one that can’t last and one that doesn’t happen in either other property. The reason Superman’s betrayal is so heart wrenching is because it earned that, by giving it’s leads time to banter and commiserate.

Unfortunately, Injustice 2 completely fails to address Batman’s global communication and monitoring network, Brother Eye. Injustice isn’t known for its nuanced takes on characters or plot points but it’s a glaring error to ignore that Batman is on the edge of making a series of horrible mistakes. Brainiac’s invasion derails the possibility that Batman might too become a hero who didn’t realize he was the villain.

Overall, the story feels like one full of half ideas and missed opportunities. It’s okay to have excuses to do cool things, We Will Rock You is a musical written around an excuse to play the music of Queen. That’s fine and even kind of awesome. Instead, Injustice 2 feels a little more care would have given it a memorable and deeply affecting story mode.

Three Games That Almost Ruined my Most Cherished Friendships