The footage shown of the upcoming Spider-Man game looks pretty neat. It seems to have a healthy blend of the goofy, fallible superhero that movie goers connect with and the brilliant engineer that pops up in the comics. This Spider-Man wasn’t just acrobatics, he stalked and restrained his prey, used gadgets to subdue and confuse them. He dodged and countered in panache, effortlessly moving from foe to foe as he subdued and restrained them. In other words, this Spider-Man was Batman.

That’s not a pejorative. Rocksteady’s Arkham series has become the gold standard for free third person action adventure games that aren’t in the Resident Evil 4/Uncharted mold. Though not without its problems, the Arkham series took Assassin Creed’s defend-counter-attack system and perfected it. Batman knocked heads and broke limbs with the flowing grace of Simone Biles.

In a way, it seems fitting that Spider-Man would find himself Batman-ing through his own game in 2018. Spider-Man’s tragic backstory is similar. Of course, Spider-Man punches harder, reacts faster, climbs more efficiently, and flails around with more grace, he’s got powers. But those powers and abilities aren’t that different from what Batman is. Except for the part where Spider-Man has webs (but sometimes those are gadgets.)

Mythos aside, it’s important to actually consider why the Rocksteady formula has worked so well and why it continues to be seen in games like the Mordor series and now in Spider-Man. The first is visual. Rocksteady telegraphs each enemy’s next move and how to counter them. Blue lightning bolts meant it was time to counter. Red charging enemies needed to be more actively countered. As the game progresses, more layers are added onto this system. Enemies which require specific tactics are introduced by the basic premise never changes and constantly asserts itself.

Next, is “flow.” If you time your attacks correctly, Batman darts and weaves across the arena and does more damage. This ties directly into the color alert system. Flow is never broken by the need to counter. In fact, when done perfectly flow is countering.

Last is empowerment. Outside of direct combat the player doesn’t stop being Batman. Instead, he becomes a different Batman, the Batman who stalks his quarries and uses his gadgets to get the drop on them. Feeling like Batman continues on into direct combat through visual elements like “glory shots” and expert sound design. 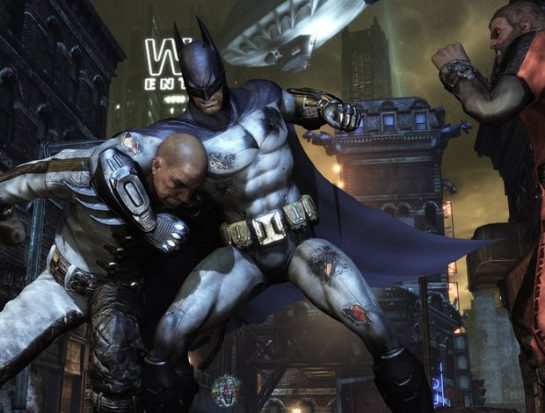 In just eight minutes you can see Spider-Man 2018 do all of these things. First is the stalking, being a different Spider-Man than the cinematic one, the nerd with web-based toys. Then in combat Spidey’s spider sense tingle. We see which assailants are about to attack and when to counter them with the acrobatic flair of a gymnast with web shooters. All the while, Spider-Man flows. He shifts from gadgeteer to martial artist without missing a beat and the video shows satisfying sights and sounds as he does all of this.

So Spider-Man: Arkham New York City looks pretty neat. Even if the closer genetic relative to Arkham is the upcoming Mordor game, Spider-Man seems to make brilliant use of a tried and true formula. Sure, it’s all just punch, counter, punch, rinse, and repeat, but at least a new masked vigilante will get to take center stage. Oh and Rocksteady is brilliant.

Yes, I Played a Fighting Game for the Story

The Mummy is a Garbage Movie