You’re trapped in your parlor. The door is gone. Outside you hear the skittering of… things. Things you can’t comprehend. How did it end up like this? One day you’re running a confidence scheme, the next you’re in hell. Well, not hell proper, but it’s real life closest countenance – Arkham, Massachusetts.

The latest addition to Fantasy Flight Games lineup of Cthulhu themed games is Arkham Horror: The Card Game. Based on the stories of H. P. Lovecraft, this card game seeks to follow in the footsteps of the highly popular Lord of the Rings Card Game. These games are in their own category referred to as Living Card Games (LCGs) and they differ from what most may expect. The classic card game format for constructed deck is that you buy a starter, a bunch of boosters, or both, and construct a deck of cards to play against an opponent. You see this in games like Magic or Magi-Nation. The other popular format for card gaming is a set pool of cards you construct a deck from and everyone has access to the same resources. Arkham Horror is similar to the latter, but not completely.

The LCG concept starts as a set box of cards, but each month or so a new set comes out – a booster pack – that contains new characters, cards, adventures, etc… for you to add to your deck and experience with friends. Oh yes, one of the other bits about Arkham that sets it a bit apart from most card games – it’s solo or co-op. When constructing your decks, you’re completely focused on fighting whatever nameless horror awaits you in the next room. 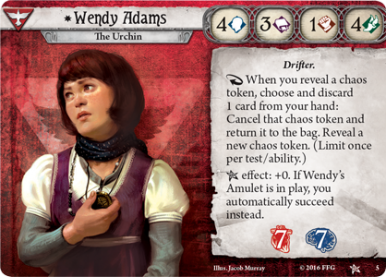 So, how does it work? Each quest has a set of cards that reference the situation for the players. The players must spend the tokens they gain through play to advance to the next card. Once you reach the end of these cards, the scenario ends, usually in a positive manner. Also included is the set of cards that leads down a darker path. You have to place tokens on these cards each turn. These tokens represent the enemies of all mankind, working to undermine the heroes. This deck acts as a timer and method of control for the game. While most players won’t want to rush, this particular mechanic forces a sense of urgency on the game. If you reach the end of that deck… it’s not quite as positive.

Each player has three actions a turn and their own deck (the manual has starter decks laid out for all of the included characters). Each location in the game is represented by a card. These cards have different information based on the side that’s showing. Before the players investigate a room, the mundane side shows an idea of what the room is with very little information. However, once investigated, the card is flipped and the gameplay mechanics are exposed. Rooms have two values. The first value, on the left, is the amount needed to pass the investigation skill test while the other is the amount of clues in this room. 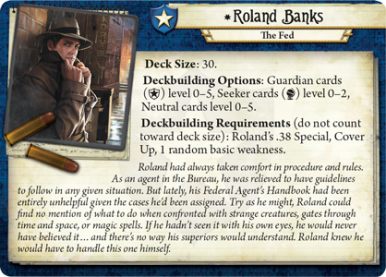 These clues are what you pay to move the game forward, flipping the next card in the scenario and opening new avenues for play. With each new area comes the chance for danger. After each player has gone for the first time, the next round starts with the Mythos phase. This is also when you place tokens on the pro-Cthulhu deck (a kind of doom track) and draw cards from the encounter deck. The encounter deck consists of specific cards per scenario and include things like enemies, traps and different skill tests to avoid negative effects.

As the game plays, you pay the resources you collect to play cards from your hand. Usually it’s an item or a weapon, but can be spells, skills and weaknesses – the latter forced upon you. Whenever forced to make a skill check, you can use cards from the table, from your hand and from your partner to boost your chances. Skill tests in Arkham Horror are interesting. The game comes with a certain amount of tokens that range from negative numbers to arcane symbols. Depending on your difficulty choice, you put a pre-determined amount of tokens in an opaque container and draw one as your random skill check result. If your skill is higher than the test, based on the token you drew, then you pass. The arcane symbols that also appear can mean either good or bad things, but those vary by scenario. Overall, it’s an unusual way to add randomization without dice. 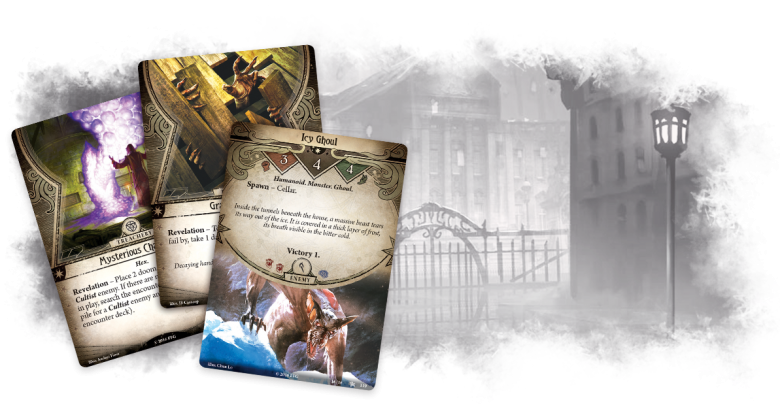 Arkham Horror: The Card Game is somewhat unique in that it plays with ideas in board gaming that have been around forever but manages to come out feeling fresh. There’s nothing particularly new about resource management (ask Europe) or using card decks as the randomization of events, but it all feels comfortable here. If you look at a board game like the inside of a computer, this might make more sense. In a computer, as long as the components are compatible, you can throw them together and it will mostly work. You might have to cut up your knuckles or wire snip a bit of useless metal, but it functions and will provide a standard, often enjoyable, experience. However, if you have a computer that’s designed and machined to fit perfectly, it becomes more than the sum of its parts. It becomes a pleasure to operate.

I wholeheartedly suggest Akrham Horror: The Card Game to players. This goes above and beyond if you’re a solo player or if you’re a small group that likes co-op gaming. It is good to note that you can play a three to four player game, but it requires a second base set (there aren’t enough cards to make more than two starters for any of the characters). The introductory price of $39.99 is a pretty low entry point as far as money is concerned and the box doesn’t take up much space. My only caveat with this game is that it depends on the quality of cards going forward, but since FFG has plenty of experience with the critically acclaimed Lord of the Rings LCG, I wouldn’t worry about that. If this game goes the same way as LotR, things are going to be quite interesting – and entertaining – in Arkham, Massachusetts for the foreseeable future.

If you’d like to see an example of the solo play, check out Jason’s YouTube video detailing the rules and the first quest.

Cardboard for One: Embracing the Solo Game
Previous Post

Why Do Simulators Turn Us Into Sociopaths?