As a woman who has never given birth before, pregnancy sounds like a disquieting and grisly affair. Watching your belly gradually swell up to a size you never thought possible, and subsequently pushing a tiny human—the size of an adult cat—out of your body, feels more akin to body horror than a miracle of life. Eclipsed by the glamour of celebrity pregnancies like Beyoncé are the inconceivable pain, the overpowering nausea, the incessant sweating, the amniotic fluid clouded with blood and all the bodily mess that every mother had to go through before and during childbirth.

Tapping into this fear is a newly released point-and-click game called Cayne, a prequel to the sci-fi horror videogame, Stasis, back in 2015. Originally an additional chapter to Stasis, developer Chris Bischoff shared that the studio initially wanted Cayne to be about an engineer aboard the Groomlake, a derelict spacecraft that Stasis was set in. However, Bischoff changed his mind afterwards, and opted for a story about a reluctant, expectant mother in a dilapidated hospital. He explained in a Kickstarter update, “I’ve been in hospital before, and the ‘missing time’ aspect of it all has terrified me. Off you are into theatre, count back from 10, and then wake up a few hours later in a different room…you’re at the mercy of a surgeon and the nurses. Deeply disturbing.”

Like me, Bischoff had probably never experienced pregnancy before, but the feeling of anxiety over our bodies being ravaged and mangled by knives, scalpels and all manners of sharp objects is a universal one. Cayne combines this primal fear of human deformity and bodily injury with the horrors of pregnancy, which makes for a deeply unsettling experience. As the heavily pregnant Hadley, she had wanted to go for an abortion, but eventually found herself strapped onto a grimy surgical bed, while a grotesque being bumbled about around her. The horror began to sink in as she realized, through an eerily chirpy intercom system announcement, that her womb will be forcibly ripped out. This is reminiscent of some of the foulest aberrations of pregnancy from movies like Ridley Scott’s Alien, and other sci-fi body horror films like Invasion of the Body Snatchers, The Thing and Ginger Snaps. 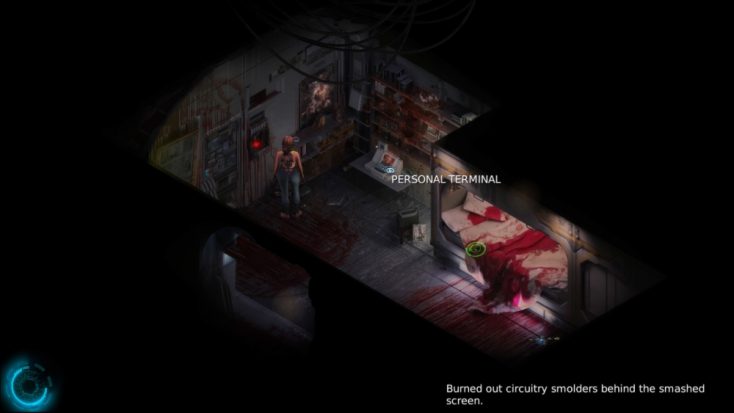 Aside from a few headscratchers that border on absurdity, Cayne is an incredibly polished game. What is promising about Cayne is that Hadley never becomes a frail damsel waiting to be rescued, or a ridiculously overpowered supermom jumping off cliffs for her unborn baby. She is understandably fearful for her life, but continues to demonstrate incredible stamina despite her horrific circumstances. While she may not be able to run quickly or battle roaming abominations on her own, she relies on her smarts to pull herself out of this predicament. In a game set in a medical facility that is threatening to collapse unto itself, Hadley’s unyielding endurance is a testament to the strength of motherhood, albeit in a twisted horrific manner.

Why I’m Okay With Never Winning