With a three-year gap between it and its predecessor, Phoenix Wright: Ace Attorney – Spirit of Justice fostered in some fans a weakness for hasty consumption. After all, the common strategy of replaying older titles in place of a new fix couldn’t survive forever. One enabler of such behavior is the post-game DLC case, ‘Turnabout Time Traveler,’ featuring Larry Butz and other recurring series characters.

Transparent fan service and questionable partner choices aside (Athena gets benched again despite valid opportunities to aid the investigation), a cash grab it is not. Much like ‘Turnabout Reclaimed’ in Dual Destinies before it — which sits better as a Case 2/Case 3 in-between than an epilogue — the DLC case boasts its share of unique moments, with a storyline the main writer refers to as “intricate” in a blog post on Capcom Unity (link contains spoilers on a late-game case). When all is unraveled, that may seem misleading. But the description is correct for how the case is approached thematically with its more subtle connections.

Admittedly, the case may not be as engaging as Reclaimed — testimony from an orca whale is more foreign than Ace Attorney 6‘s setting, and the plot twists bear weaker jolts overall — but the Steampunk treatments and ace animations are very pleasing.

Seriously, can we get an entry revolving entirely around Steampunk? What a tease. 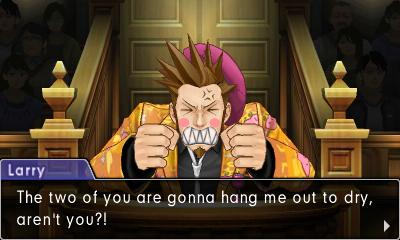 Amid discussions as to which of the two DLC cases is stronger, I’ve been giving thought to the lengthier development cycle with the past few titles and how, being that both Dual Destinies and Spirit of Justice are digital-only titles in the West, an episodic delivery system (which could co-exist with the standard four-to-six-cases-per-game approach) would be a welcome direction for the series. Especially if more cases are in the flavor of Case 4 from Spirit of Justice — standalone entries that are not intrinsically tied to an overarching plot but nevertheless have captivating elements, whether mystery or memorable characters.

“Breather cases” of that sort could help stave off fatigue and build anticipation for meatier content, while also addressing the preferences of some who feel less attached to self-contained cases because they typically don’t advance a background plot. More cohesive mainline releases would be the likely outcome, where all smaller mysteries are connected to the big.

Future DLC will continue to have a place in the series so long as efforts like Turnabout Time Traveler gain support. With Ace Attorney now at an intriguing juncture — to the point that fan feedback will greatly shape the next iteration — the possibility of an à la carte structure is a discussion worth having.

Cing’s Chase for a Second Chance

Walking Dead: The New Frontier Makes You Feel Like A Proud (Or Disappointed) Parent