I’ve never considered myself to be a sociopath which is, admittedly, something of a hollow metric given that your average sociopath will likely tell you the same thing. Perhaps a better way to convey my innocence is to say that I rarely exhibit qualities which are typically associated with diagnosed sociopaths.

Except when it comes to how I play pretty much any simulator game. So far as those are concerned, I’m basically a digital Patrick Bateman.

I first became aware of this affliction in 1999 when RollerCoaster Tycoon was released. At first, my theme park adventures echoed the design intentions of the game’s creators. I built walkways, established fair price points at the park’s gift shops, and designed roller coasters not for my own pleasure, but rather based on the wishes of the guests. It wasn’t long before my benevolence attracted record numbers of visitors.

Given that I’d be a pretty awful sociopath if I didn’t push blame as far away from myself as possible, I’d like to take this moment to blame RollerCoaster Tycoon‘s convenient save functionality for my descent into madness. See, I wasn’t quite ready to commit to torturing my guests full-time, but I was perfectly willing to save my amusement park utopia and then commit unspeakable acts of terror justified only by the promise that they were not permanent. 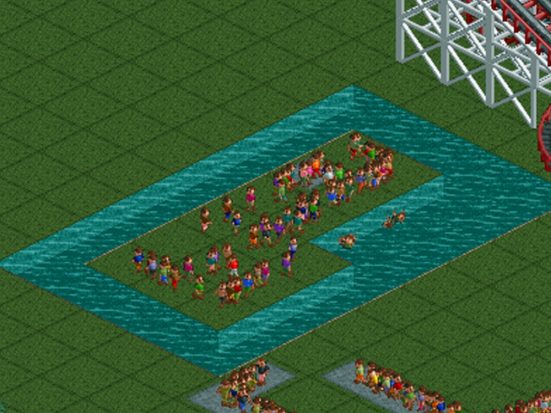 Technically, RollerCoaster Tycoon discourages you from running your park in such a way. However, this discouragement only served to create a new kind of metagame. How expensive can you make french fries before guests revolt? How can you make a deadly coaster that people will still ride? If you force three dozen guests to occupy a ten by ten space without an exit, will they still buy balloons?

This all must sound incredibly horrifying, but I’m willing to bet that it doesn’t sound entirely unfamiliar. It seems that everyone has at least one story about that time they went a little mad in a simulator game. Maybe they designed a house of horrors in The Sims. Perhaps they destroyed all available farm equipment in Farming Simulator. It’s possible that mass animal exodus incident in Zoo Tycoon wasn’t entirely accidental.

There’s an odd comfort that comes from learning that our deepest, darkest gameplay decisions are not entirely unique, but that comfort does little to explain the source of this madness. What is it about these simulator games that inspire us to throw a psychotic wrench into the works? Are such actions truly the sign of a sick mind?

Perhaps they are, but that doesn’t mean we should feel bad about our sociopathic simulator sensations. These games were designed to encourage players to employ creativity in pursuit of freedom. The fact that said freedom sometimes leads to actions which could be interpreted as slightly deranged is a testament to the individual players’ desire to break free of conventions.

Well, at least that’s how I’m currently justifying placing the only bathroom at my Planet Coaster theme park at the end of a winding walkway shaped suspiciously like a middle finger.

A Great Story and a Good Fluke
Previous Post

Unwinnable Listens to the Best Music of 2016 – Prelude