Full disclosure: the author of this piece was a Kickstarter backer for Downfall

They say that hundreds of the lower levels of The Rise used to be almost entirely covered by water, that people lived only on the very top of the structure and farmed the resources of the sea and the earth. I’m not so certain. I can imagine men and women scurrying about on the Platform, pulling oil up from below and keeping the machinery alive. But it is hard to imagine the steel girders underneath without thousands of structures clinging to it like barnacles left behind when the tide rolls out.

Folks mostly trade for what they need on The Rise, but if they ever want something that they can’t afford, they can always barter their bit of sky. The higher you are, the more access you have to resources like the solar panels and the water condensers and the hydroponic farms. And of course, as the old saying goes, shit rolls downhill, both literally and figuratively in this case. Some people make their living renting out access to a space up near the platform within easy walking distance of these amenities. Others try to build outwards to get out from the shadow of those above them. My job is to monitor the integrity of the structure itself, to balance the need for stability against the ambitions of the developers and investors who permanently reside on the top.

American pop culture is obsessed with the end of the world. The Hunger Games, The Maze Runner, Divergent, Mad Max, even The Walking Dead… we love to imagine the different flavors that our apocalypse might take. Some say the world will end in fire, some say in ice, but all agree that plucky young people will rise up and fight back against the powers that led us down the road to Armageddon. Perhaps these are the most popular types of stories that an empire creates when it is poised to fall.

Downfall by Caroline Hobbs invites players to invent our own version of the end of the world. The player characters are unable to prevent their society from sliding into oblivion, but they are able to create some sort of meaning, to make some sort of statement, in its final moments.

The first step in a game of Downfall is the mutual creation of the Haven, a society that will ultimately be doomed by the tragic Flaw at its center. Think: the rapacious capitalist excesses of Rapture in the BioShock games or the industrialized, regimentation of human endeavor in Aldous Huxley’s Brave New World. For the world described above my fellow players and I chose Ambition. Next, each of the players choose an Element, the combination of which will be used to imagine the physical environment in which the Haven exists (and perhaps will help explain how the Haven came to be necessary in the first place). My group selected Air, Oil, and Sea, which lead to the creation of The Rise, an offshore oil platform sticking up high above the surface of a receding ocean. Many generations after some great environmental disaster, the offspring of the men and women who worked there would scurry over the structure like ants, living not only up on the Platform itself but also in makeshift structures built down amongst the structural supports that were once underwater.

Finally, all the players collaborate together to create the three player characters: the Hero, who sees the dangers that the Flaw poses, the Fallen, who is so entrenched in their beliefs that they work to promote and strengthen the Flaw, and the Pillar, a representative of the common people who have 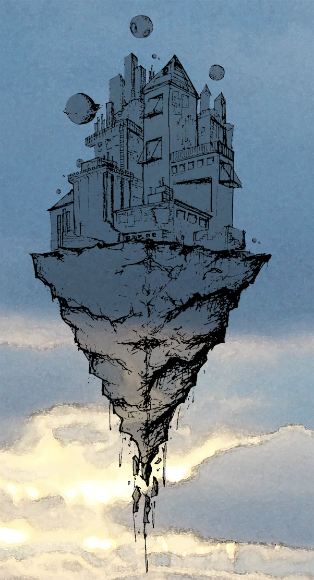 lived with the Flaw their entire lives and think of it simply as the way things are and have always been.

Our game was about an engineer who discovered that The Rise was in danger due to corrupt developers bribing her fellows to falsify data, giving them posh quarters near the top of the structure in exchange for getting the go ahead to continue building outwards. Her husband, a childhood friend of an up-and-coming real estate investor, is torn between wanting to support his wife in her fight for the integrity of her profession and wanting to give their children the opportunity to live in the Heights should she choose to look the other way.

The unique thing about a game of Downfall is that, much like the creation of the world itself, all three of these characters are played collaboratively. After each scene, the characters rotate, meaning that players have to get inside each one’s head and examine the Flaw from all possible angles, empathizing with both renegades and collaborators.

Playing Downfall reminds me a lot of one of my other favorite table top games, Call of Cthulu, in that, because we were certain of our inevitable ends, we all felt free to make bold, potentially dangerous choices. There was no temptation to “metagame” because there will be no tomorrow.

You don’t need any dice, figures, or maps to play Downfall. However, the need to rotate between multiple characters might make this game a little difficult for table top RPG beginners. For more experienced players, however, the game makes for a great bite-sized campaign.

You can purchase a PDF of Downfall here for $9.99.