It’s a fruitful time for digital implementations of our favorite tabletop board games. With standout apps like Carcassonne and the recently released PC port of Twilight Struggle, there is no shortage of  games that have made the jump from family room to computer or phone screen.

Smash Up is another example of an attempt to bring a popular tabletop game to the PC. Currently in Early Access on Steam, Smash Up is a card game that brings together popular character archetypes from across all genres of fiction and pop culture. The game includes dinosaurs, ninjas, pirates, zombies and lots more, each with their own deck of cards. The Early Access version only comes with a few factions with more for purchase via the starter pack DLC.

At the start of the game, each player will choose two factions and shuffle their decks together, ending up with alien robots, wizard bears, or some other absurd combination. The novelty is a lot of fun and has allowed for a plethora of expansions.

Players then use their decks to fight for control over point-based objectives called “bases.” If the power of your cards meets the power level of the base, you will win the majority of points the base awards. The gameplay is simple and fast-paced, which is ideal for a casual game night with a few friends.

A PC port seems like it would be a good fit for Smash Up, but a number of problems in its current state hold it back from being worthwhile. The game lacks any tutorials, so unless you have a copy of the rulebook, or look it up online, you’ll be lost. 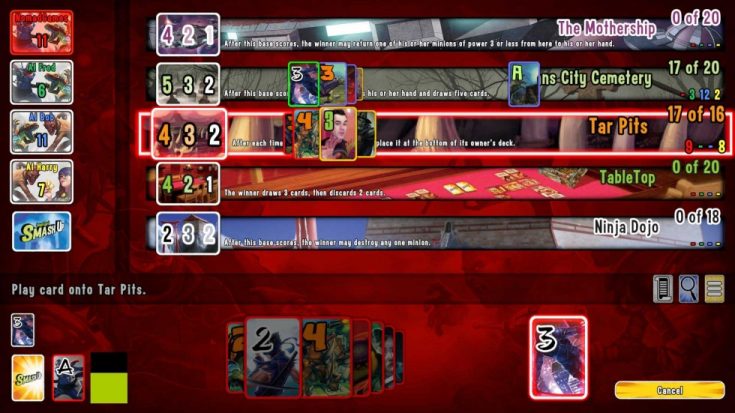 Interface problems abound, as well. The options menu isn’t accessible from the main menu. Instead, you must start a game in order to tweak the audio and graphics settings.

The gameplay is also clunky and feels rough. My clicks often took two or three attempts to take the action I wanted. Sound effects, one of those things you really only notice if they don’t mesh well with the action, are harsh and distracting. I can appreciate an attempt to lend some atmosphere to a simple card game, but Smash Up could use a lot of work on this front.

The most grating feature is one that rears its head during games against the AI. After every turn, including the AI’s, you are forced to click a “proceed” button. It is very frustrating and often left me waiting impatiently until I realized it fell to me to move the game along. It wasn’t until after my third game or so I realized that there’s an option to turn this feature off. Admittedly this was my own fault, but it’s still baffling that the proceed button exists at all.

I’ve written a fairly negative impression here, but that’s what Steam’s Early Access is for. The game is still in its beta stage and the developers will continue to tweak and change things, so take these impressions with a grain of salt. Until the game is refined, however, I recommend staying away. Instead, find a copy for cheap on Amazon and plan a game night. Smash Up is a good game that almost demands a digital counterpart, but the Early Access is not it. Not yet, at least.

Dead Cells : Variety is the Spice of Death

Office of the General Counsel Episode 9 – Pillow Forts and Chill