Roguelites have grown in prominence over the last several years, thanks largely in part to the success of games like Spelunky and The Binding of Isaac. The general idea behind this style of game is that you progress as far as you can  against increasingly difficult enemies with a limited pool of health and no checkpoints. Once you die, that progress is lost and you must start from square one once again. Sometimes, as in Rogue Legacy, the progress you made in a past life is noted so that you have a benchmark against which to measure future runs, but other than that, there is little in the way of permanence.

I’ve never personally been that big a fan of the genre. The main reason why is due to the fact that I grew up on RPGs, a genre where character improvement is central to the experience. Allocating stat points and becoming stronger with a sword will always be infinitely satisfying in a way that the null sum of roguelites could never hope to match. In Rogue Legacy, the specter of death haunts every run, and that fear of dying and losing all progress is absolutely debilitating to me. There’s something just so deflating about losing all your hard-fought progress at the hands of some lowly enemy that shouldn’t have been a challenge, that should have been easily overcome with an over-leveled sword strike.

This is exactly why I was caught so off guard by Dead Cells, a new roguelite currently in Early Access on Steam. The game plays like a combination of Castlevania and a 2D Diablo, and if that sounds like a good combination, that’s because it is. There isn’t much in the way of story here: you control a reincarnated knight in some unnamed castle seeking some kind of vengeance. It’s vague, but purposely so–the focus here is more on the combat and wide variety of equippable weapons and abilities. 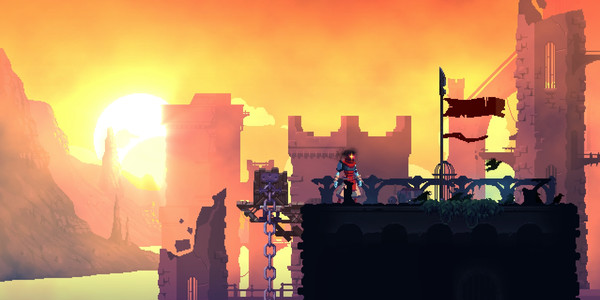 Enemies drop new weapons for you to pick up and experiment with. Because loot drops are randomized each run through Dead Cells is different, which forces you to improvise in ways that other entries in the genre typically don’t encourage. The variety of weapons is impressive, and each provide different bonuses like critical hits when striking enemies from behind, or coating them in oil, making them extra vulnerable to fire damage. There are also other abilities like a turret that fires automatically, and an army of bugs that will devour foes.

Between levels, you can unlock permanent upgrades to these weapons, making them stronger. The loot still drops randomly, so you’re never sure what weapons you’ll be using, but this only provides a sense of excitement when your favored twin daggers or firebomb drops. The only complaint I have with the shields: they don’t offer much in the way of utility, and it’s nearly impossible to rely on them when you’re in a room surrounded by baddies.

The tremendous variety would mean nothing without satisfying combat. Luckily Dead Cells delivers this in spades, with smooth controls and combat the feels both weighty and elegant. Taking down a room full of enemies is akin to a dance as you roll and strike in combination until you’re the last one standing.

I’ve already put several hours into Dead Cells, and I imagine that number will continue to grow as improvements are made during its tenure in Early Access and in the lead up to its eventual full release.

You can check out Dead Cells on Steam Early Access here.

A Strange Hill to Die On