Last night, Nvidia announced its first-ever dedicated gaming device, currently code-named Shield. It looks like a slightly oversized Xbox 360 controller with a 5” clamshell screen on its top and it runs a “vanilla” version of the Android operating system.

You might expect such a bulky, open-source gizmo from an industrious hacker – the kind of person who’d squeeze a screen onto a Gamecube controller or turn a toaster into a Nintoaster. What the hell is a company as big as Nvidia doing making one?

What about an open platform that rewards creative players – not to mention small-fry game designers?

The answer seems simple enough: Nvidia has a narrative in mind. They had a few things to announce alongside the Shield, from a new, high-grade smartphone chip to a cloud-gaming service. Nvidia’s chips already power many popular smartphones and tablets, not to mention a ton of gaming PCs.

An excited tech blogger might grin about “figuring out” the resulting story: that the Xbox 360 and PlayStation 3 are on their last legs and that Nvidia sees an opportunity to strike. To assert itself as the next possible gaming titan across a rapidly changing games landscape. True that: Blood’s in the water and the Shield seems to have enough power and features to compete in a smartphone/tablet/console world. But anyone who thinks they’ve cracked the story might want to consider the weird thing Nvidia did in its Shield presentation.

It conceded the next generation.

A lot has changed in videogames since 2006 – since the last major console launch period. The transitions between console generations have always proven shaky; ripe for early posturing and sniping (we hardly knew ye, Dreamcast). Companies gain, lose and fall. Shoppers transition to new platforms. Software sales slow down in the ensuing lull. 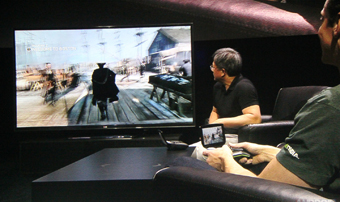 Yet in over three decades of gamers molting and shedding their past consoles, PC gaming has never found a way to significantly strike – not even during console lulls. It’s not a bastard platform. PC games have made tons of cash through console highs and lows alike. But both in sales and in reputation, they’ve never taken over in the cultural-zeitgeist, “mom, we’re playing Nintendo” way.

Nvidia needed gaming fans to care about the Shield during its debut demonstration last night, and so it connected the portable system to a home computer to show off its home-streaming feature. Games came and went. Need For Speed. Assassin’s Creed. Then Nvidia CEO Jen-Hsun Huang awkwardly interrupted and insisted that his representative show off one other Shield feature: that it can connect to Steam. That it can run games through Steam.

Hold on. You’re trying to launch your own device, complete with its own digital download service, and you jack it into the world’s largest digital distribution platform? But Huang had no other choice.

Pardon the Captain Obvious stance, but Steam, Valve’s online service, has matured mightily since it launched in 2003. Or even 2005, when Xbox 360 launched. Back then, Steam was just a store. An alternative to Best Buy. A different gateway to the actual platform.

Other game-download stores still function that way, of course. They may have a few social features, but it’s not just that they’re shopping-first platforms. They are also intrinsically married to their platform. Again, typically, Windows.

Makes me think a lot about 2010, when Valve Software launched Steam on Macs. Apple fanboys delighted in the news. Valve finally heard our cries! They need us!

Bully to that. Look at Mac sales in 2010, and you’ll see some positive growth numbers…but barely. Up to nearly 10% of personal computer market share. Run the cost-benefit numbers and you won’t see a giant uptick in profits from reaching out to that Mac user base – or, really, a fraction of that fraction, assuming a limited audience was inclined to install a third-party gaming service.

What about a version of Steam that can install on practically any modern computing device?

Maybe it didn’t cost too much to deliver Steam on Mac. But what if it did? What if Valve looked at the numbers, knew they’d lose money supporting a whole ‘nother computing platform, and said, let’s do this anyway?

The Steam we know today is beautiful, more so than you may give it credit for. Its clean interface combines shopping and play without riling up users. It handles automatic updates, DLC parsing, friend lists, gift-giving, wish lists and matchmaking.

But it also makes plenty of room for community contributions, and not just in forums and modular community hubs. Fans use Steam to upload and vote on everything from mods to whole-new game ideas. That’s not just a store. Heck, that’s beyond a platform.

That is a food chain, in which the grazers become the producers – and, by nature, the advertisers and evangelists. And Valve has taken the next big steps to protecting its entertainment biodome.

Valve’s recent, public shift towards Linux development is no accident or coincidence. I might not have even paid it much mind, had Valve co-founder Gabe Newell not blasted Windows 8. But when that happened, I couldn’t help but remember the insider tidbit I’d been told early last year.

“Jeri Ellsworth,” was all my tipster told me last March, and a quick bit of Googling revealed her gaming-hobbyist career as an electrical engineer…and that she’d been hired at Valve, along with a cast of other top-grade hobbyists. Chatter soon picked up about a possible “Steam Box,” essentially a living-room PC built for Steam use, and that device may very well still be coming.

Here’s the beauty thing: Valve might not need to launch it.

Shield won’t be the last device to show up and court Steam as a partner and Valve’s internal gizmo-testing team probably isn’t trying to invent the next closed game system, as that’d disrupt other hardware makers’ designs on allying with Steam. The next revolutionary game controller, on the other hand…I think that’s more than possible. Imagine it. A low-cost USB-powered device that picks up unique feedback – maybe heartbeats, or vision, or finger motions – and connects to any Steam-compatible device. Like Nvidia’s, or an eventual Steam Box, or any other retail partner’s.

And even if that high-falutin’ fantasy doesn’t come true, well…you don’t get a system like Steam running on Linux without a few crazy-minded engineers in the room. $50 says someone in Valve’s lab has rigged up a Steam toaster by now.

Most Steam games don’t require a computer beyond the average kind on the market now, so the cost of entry is already miniscule, and tacking on a cheap, innovative controller (or sensor) with a killer-app game would do half of the work for Steam newcomers. Valve’s vibrant food chain, which players log into and participate in on a daily basis, already has the other half taken care of. It ain’t no SegaNET, that’s for sure.

At the annual IGDA Summit in Seattle this year, a panel of industry experts weighed in on all of the possible platforms emerging; the crowd was an attentive mix of developers and venture capitalists, all eager to figure out what the hell was coming next. I stood up during the panel’s Q&A session and called them out for ignoring the giant elephant in the room: Steam. What about Steam? How could you talk about the next generation for 40 minutes without once uttering the S-word?

What about a platform that keeps its prices low and won’t make shoppers feel silly for dumping an old system?

I was very nearly laughed out of the room. This next generation is about streaming and access, they said. Systems like Gaikai and Ouya will make the difference.

But this console transition period, for gamers, might be about something else. What about an open platform that rewards creative players – not to mention small-fry game designers, who have been emphatic about Steam profits far outpacing other platforms? What about a version of Steam that can install on practically any modern computing device? What about a platform that keeps its prices low and won’t make shoppers feel silly for dumping an old system?

Nvidia, have fun with your Shield. Valve’s running in with a sword.

Take a Load Off