The most shocking detail in Hideaki Anno’s 2016 Shin Godzilla is also its most quiet, slipped in just as the film’s second act comes to a thunderous conclusion. America and the JSDF’s bombing runs have done nothing to deter the titular saurian’s march on Tokyo; in fact, they have only given him the charge he needs to spit his trademark atomic breath. As the dorsal fins on his back spark a neon pink, the titanic menace cranes his neck to the sky, lets forth his iconic roar, and then, just before he disgorges a torrent of nuclear fire, his jaw splits.

It’s as if in-between cuts the actual Godzilla had been abducted and replaced by one of The Thing’s grotesque dopplegangers. Less generous viewers might dismiss it as just another one of the little innovations designer Mahiro Maeda has introduced to distinguish this latest vision of the decades old icon from the dozens of other iterations that came before. But for me it was the defining moment of the film, one without which the devastation of Tokyo and the mad-dash to stop Godzilla would have meant so much less.

It’s not the only transformation the famously iconoclastic Anno and his cohorts subject the franchise to, or even the most obvious. From the first few minutes, it’s clear that this is a movie much more interested in lampooning the bureaucracy of the Japanese government and American interventionism than it is in chronicling a rollicking clash between giant monsters. More screen time is given to bickering politicians than 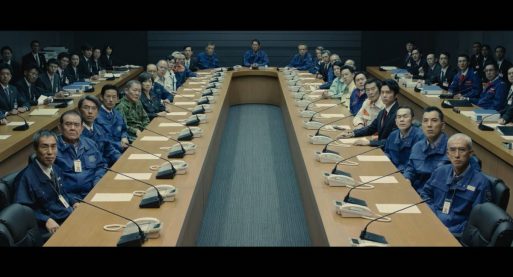 to the titular monster. When weapons do fly, the mood is more melancholy than heroic; what short-lived victories can be claimed over Godzilla arise from ingenuity more than brute force. There’s camp afoot, but it comes more from budgetary restraints and underskilled actors than from intentionally hokey writing.

Of all these transformations, though, Godzilla’s mouth split is the most exciting. To subject a character as familiar and beloved as Godzilla to that kind of monstrous metamorphosis is to introduce a much-needed element of the uncanny to the film. It reintroduces the same aura of dread that must have hung over viewers the very first time Godzilla premiered.

This change lets viewers know they are dealing with something that only looks like the iconic Godzilla. In reality, it is something much more horrifying. It introduces us to a danger that feels utterly appropriate to this day and age: unpredictable yet familiar, as if some alien presence is wearing a Godzilla finger puppet it might rip out of at any moment.