This column is a reprint from Unwinnable Monthly #81, Body Horror. If you like what you see, grab the magazine for less than ten dollars, or subscribe and get all future magazines for half price.

When you’ re addicted, your life becomes a series of cliches.

You layabout in the physical mess you’ ve made for yourself after you’ ve long stopped caring about the prospect of someone who may care seeing you like this. There’ s no chance of that happening, anyway, as you’ ve cut off ties with such judging eyes in exchange for a relationship with those who finally understand that the purpose of life is to combat the pain of existence through any substances necessary. You spend your days in the pursuit of making yourself as numb as possible, and then you wake up and do it again.

I spent three years of my life never willingly knowing a day of sobriety and, in some ways, I’ m still ashamed to refer to myself during that time as an addict. Not entirely because I’ m ashamed of how I spent my time, mind you, but rather because I never reached a point where I resembled the addicts I had seen in various forms of entertainment. I never turned to the needle, I never lived on the streets, I never stole from my mom for another fix and I never waded through the worst toilet in Scotland to retrieve lost drugs.

It seems like such a silly thing to downplay your own addictions because they do not quite match the ones you’ ve seen on film or read about in books, doesn’ t it? Yet, you must understand that I was also something of an entertainment junkie during this time (honestly, I was hooked on just about any form of escape) and the most hardcore of fictional junkies became a kind of line in the sand to me. So long as I did not pass their exploits, I was doing alright. I suppose that I’ ve always felt that everyone else would think the same.

In my heart, I know that’ s not true. I know that addiction is addiction and that measuring it by degrees is a poor way to gauge your health. However, in a way, I will always look towards entertainment portrayals of addiction for some kind of connection. For something that always allows me to look upon it and remind myself why I cannot go back.

In many ways, that work portrayal has long been Frank Henenlotter’ s 1988 film Brain Damage.

At the time of Brain Damage’s release, Frank Henenlotter had already established himself as a master of the body horror genre. Henenlotter’ s work on 1982’ s Basket Case showed that the man was capable of exploring the more graphically seedy elements of this genre with a particular dark wit that didn’ t seem as interested in social commentary as the works of David Cronenberg.

Brain Damage was very different in that respect. This tale of a parasitic life form named Aylmer that offers hallucinogenic bliss to a young New 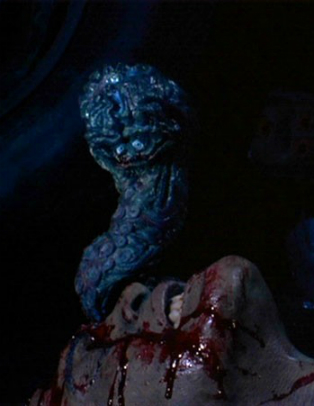 Yorker by the name of Brian in exchange for human brains is unmistakably a glorified metaphor for the hardcore drug usage haunting America during that time.

Actually, the movie’s’ intentions are perhaps most accurately described as a parody of the anti-drug PSA culture of that era. Released about a year after the infamous “This is your brain; this is your brain on drugs” commercial, Brain Damage often seems to revel in knowingly applying a heavy dosage of that old Reefer Madness absurdity to the modern “shock and awe” style anti-drug piece. From the moment that Brian becomes a kind of accidental addict after Aylmer chooses him as a host, Brain Damage begins to spout a tirade of popular “Just Say No”sentiments with its tongue firmly in cheek.

“Of course you can become addicted from using drugs just once.“

“Yes, the feeling of being high produces a sensational light show that the sober mind could never replicate.”

“Never doubt that you will betray anyone and perform horrific acts in exchange for that next fix.”

If a viewer does not hear the snickering behind these statements, perhaps it is because they are too busy being traumatized by Brain Damage’s liberal use of extreme violence. Though the type of gore we see in Brain Damage is the same over-the-top kind popularized by B-horror films of the ‘ 80s, it ends up packing a formidable punch when combined with the movie’ s underlying sarcastic humor. This is especially true of the film’ s most infamous sequence which shows Brian following a young lady to the alley behind a club where she offers to perform oral sex. Upon unzipping his pants, however, she is greeted by the very phallic Aylmer whose subsequent method of retrieving her brains begins to resemble the act she was about to perform.

Though that scene was cut from Brain Damage’ s theatrical version, it nonetheless manages to perfectly summarize why so many people (even Henenlotter fans) despised the film upon its release. It failed to replicate the nonchalant seedy fun of Basket Case and instead came across as a confused film with a misplaced sense of importance. What praise the movie did receive was typically reserved for its practical effects and ability to comically skewer the most outlandish of PSA messages. 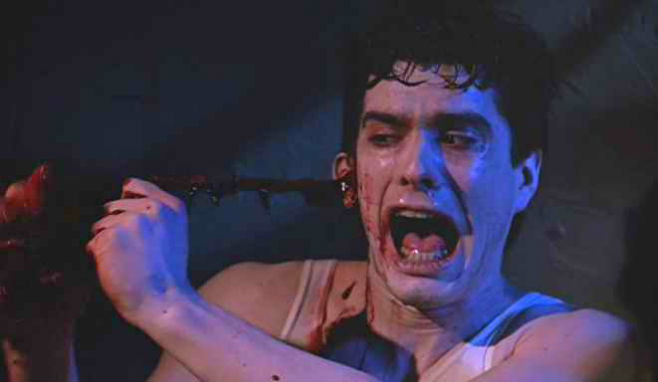 While Brain Damage’ s dark wit and casual gore make it easy to analyze the film as a simple parody, what cannot be discounted is the way that Frank Henenlotter’ s mastery of the body horror concept allows him to, almost by accident, turn Brain Damage into the premiere anti-drug film of the genre.

Body horror is most commonly defined as a work that deals in the “graphic destruction or degeneration of the body.” It examines what happens when individuals’ obsessions and curiosities cause them to lose their humanity in a physical sense. Aware of their physical malformations, but now unable to willingly revert themselves to the person they once were, these mutations must endure a kind of horror that is perhaps best described by this passage from Harlan Ellison’ s I Have No Mouth & I Must Scream:

“I can dream, I can wonder, I can lament. Outwardly: dumbly, I shamble about, a thing that could never have been known as human, a thing whose shape is so alien a travesty that humanity becomes more obscene for the vague resemblance. Inwardly: alone. I have no mouth. And I must scream.”

There is perhaps no greater example of Brain Damage’ s natural ability to portray the terror of addiction through body horror conventions than the character of Aylmer. Aylmer may provide the substance that Brian becomes hooked on, but in reality, Aylmer is the personification of addiction. His promise to provide Brian with a new life free of pain and loneliness is less of an offer and more of a threat of what life without him may be like. When Brian is attempting to get clean by waiting for the withdraw effects of Aylmer’ s drugs to fade away (a rare moment where the film offers no comfort through humor or absurdity), Aylmer is there to calmly assure Brian that he has been at this for a long time and that there is no way that he will outlast him. He even sings light-hearted songs while Brian tears away at his skin in agony.

It’ s that singing that remains so haunting all these years later. Films like Panic in Needle Parkand Requiem for a Dream have always relied on making the audience come to terms with the terrors of addiction by making them feel depressed as they watch a fellow human fall to the worst horrors our mortal world can offer. Brain Damage isn’ t interested in making you feel depressed. It doesn’ t present Brian as a victim of some faceless evil substance, but rather gives that substance a clearly evil (even mocking) form and forces us to watch as Brian crawls back willing towards it. Even though Brian is released from the torture he knows that he suffers from and is able to scream once more, he would rather accept this parasite that mutes his fears back into his life than find any redemption in the pain. 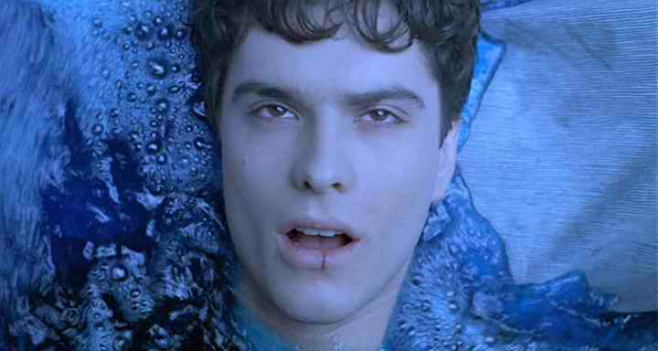 If this sounds like a cruel way to view an addict, perhaps it is. Then again, Brain Damage is a cruel film. It’ s unflinching in its vulgarity and dares you to be entertained by its violence. Though the same can be said of many body horror films, what makes Brain Damage so special is that it dares to suggest that a genre we typically allow ourselves to be entertained by, based solely on the fact that its most horrific elements are ultimately sensationalized works of exploitative fiction,may indeed not be that unrealistic after all, at least as it concerns the process of becoming an addict.

Brain Damage may handle the sensationalized subject of general drug use with razor-sharp wit, but when it comes to the topic of addiction, the film is a blunt-force horrific examination of how a true addict can begin to resemble the type of monstrous creation typically reserved for the most terrifying works of body horror.