This column is a reprint from Unwinnable Monthly #81, Body Horror. If you like what you see, grab the magazine for less than ten dollars, or subscribe and get all future magazines for half price.

Catherine’s theology was one of personal union with Christ; she testifies her own love so that others might find it within themselves. Through her demand and desire of frequent Communion, that union was affected through consuming the flesh and drinking the precious blood of her savior. Through this practice, she gained the knowledge and the understanding of God that she craved. Alongside this, corporeality – admitting to one’s hunger and sating it with the flesh and blood of God – was the most basic symbol of encountering the divine in the Middle Ages. To this day Holy Communion remains the most sacred and intimate union between Christ and his faithful. Blood and flesh is His essence and blood and flesh is how the faithful must take him.

After being denied the Eucharist, which was, at the time, her only earthly sustenance – Christ came to her and offered to give her private Communion from the wound in his side. Cradling her head in his arms, Catherine knelt before her Lord and drank the holy blood of the Divine to form a physical and spiritual dependence on Christ’s body like a child on the breast.

Catherine of Siena died in 1380 after a lifetime of starvation, sacrifice and service to the Catholic Church. She served as not only a theologian and author but also as an extreme ascetic whose visions during these intense periods of self-starvation deeply touched the incarnated nature of God. Her personal theology and experience with the Divine illuminates not only Christian worship but the way Bloodborne constructs and enacts the Divine as an experience located within the body. 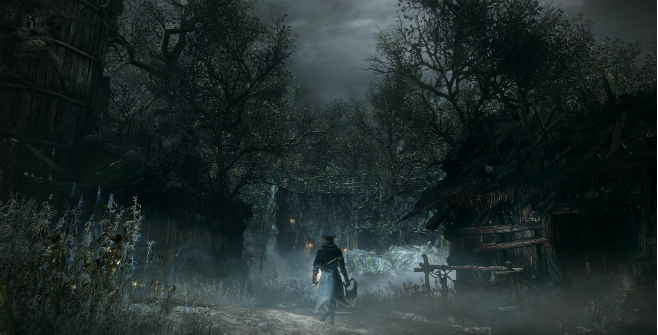 The blood of Christian imagery stains the world of Bloodborne. Formless spirits impregnate women who wail at the death of their celestial children. Consuming the flesh and blood of the Divine as an act of ritual worship drives adherents into a frenzy. The Healing Church prizes their saints and martyrs for their physicality as much as their holiness. Those that try to sate themselves on the Old Blood become ravenous beasts, creatures with mouths filled with teeth, consumed whole by their need for blood.

While Christ suffered and died on the Cross, so too the inhabitants of Yharnam: divinity is a fleshly thing. The gods are among them, weeping, bleeding, hungering, unknowable but finite in their own physicality. Ebrietas, the Great One, waits beneath the Healing Church in a perpetual kneel before the Altar of Despair. Her name is Latin for intoxication; we are to assume the church has used her blood’s properties. As in the Eucharist, the Church drinks her blood to try to make contact with the Old Ones; as in the Passion, Ebrietas’s suffering records her divinity.

And the passions of the Saints, as with God’s, are all of fleshly suffering; Saint Valerie holds her own severed head, caught miraculously at the moment of her execution. Saint Agatha holds aloft a platter bearing her own torn breasts, while Saint Lucy presents her gouged eyes to the 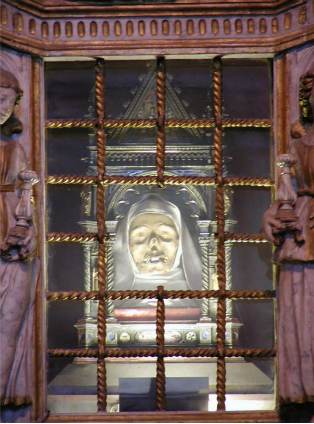 penitent. Suffering connects the human to the divine; the shared blood shed for faith that unites them. Even Catherine herself, famed for her mystical marriage with the infant Christ in a vision, wears a wedding band not made from gold or jewels but the Savior’s own severed foreskin.

While Yharnam’s Healing Church performs “blood ministration,” it is unclear whether they are ministering the sick or the blood itself. The Healing Church, as with Mensis – Latin for ‘month’, from which we get ‘menses’ and ‘menstrual’ – seeks contact and union with the Gods through these acts of bloodied communion. This desire, this ritualistic frenzy, was a something with which Catherine had intimate knowledge. While most took Communion once a month, Catherine asked to take it every day. When this privilege was granted, she often fell into ecstatic trances that paralyzed her and even lead to her ejection from the building. Knowledge and understanding is a visceral experience; as the impostor Iosefka exclaims as she shudders and heaves on the operating table during the Blood Moon, “It feels awful, but it proves that I’m chosen. Don’t you see? How they writhe, writhe inside my head…It’s…rather…rapturous…” Blood is Truth, and the Truth is understood through suffering.

Upon Catherine’s death, her head was removed from her body and encased in a gilded reliquary which stands today in the Basilica di San Domenico in Siena. Draped in her white veil, her yellowed skin stretches tight over sunken, sightless eyes as jewels glint along the base of her eternal casement. When we approach Yharnam’s Grand Cathedral for the first time, we witness Vicar Amelia kneeling before the disembodied and decayed head of the First Vicar, Laurence; it is before his grotesque skull that she transforms into a beast. Still she clutches close the locket that holds the truth of Laurence’s awful fate. The inscription: Fear the Old Blood. 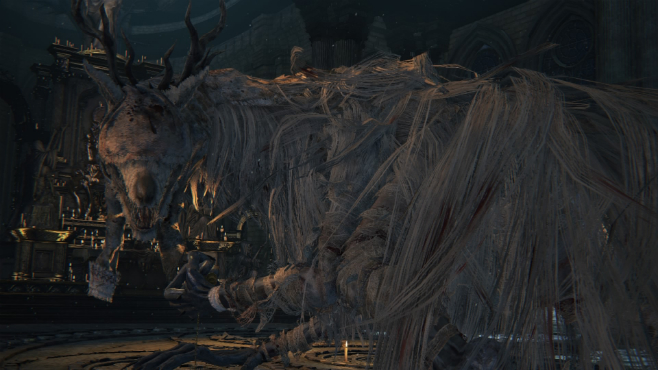 To eat the flesh of God is to accept God into oneself; there were Christians terrified of taking the Eucharist because of their own feelings of unworthiness. Still others would accept the wafer and taste honey, blood or flesh on their pious tongues. Some saw visions; of Christ himself offering his blood or as the infant Christ carved up like a lamb on a platter. But there was no satiety to be found at this table. Hunger is desire, and as Catherine knew, desire for the Divine is the insatiable hunger, that ravenous beast, which eats at us from the inside out until we can do nothing but suffer.

Drinking the blood of our fellows, birthing the child of God, or lining our brain with glistening eyes; Bloodborne engages in the corporeal intimacies of Christian worship. There is, like Catherine of Siena’s life, a personal communion. It is a private revelation, in Saint Adeline’s words. God is a living, breathing body; a body that suffers, a body that bleeds. And our bodies are more than simple mediators between our consciousness and the world; our bodies are instruments of the divine, through which we take a daily communion of God’s flesh. As with the Christian sacraments, Bloodborne locates the intersections between the human and the divine within the body: in the veins, in the mouth, and in the eye. And in Catherine’s theology, it was not the resurrection of Christ but his incarnation as God, a God who bled, suffered, and died with his children, that was most important to living in this life.

May the good blood guide your way.