I’ve been wondering where Tom King’s time on Batman is going. That’s not a knock. A story doesn’t even need to be going anywhere. As long as interesting things are happening or characters are being used in interesting ways I can be happy.

Unfortunately, that’s not really the case here. Since the New 52 began in 2011 the Batman has not been subtle about the parallelism between the Dark Knight, Gotham and Gothamites. Batman, like all citizens of Gotham, is a creation of the dark brooding atmosphere that defines all of Gotham. Tom King takes things a step further with a character actually named Gotham. 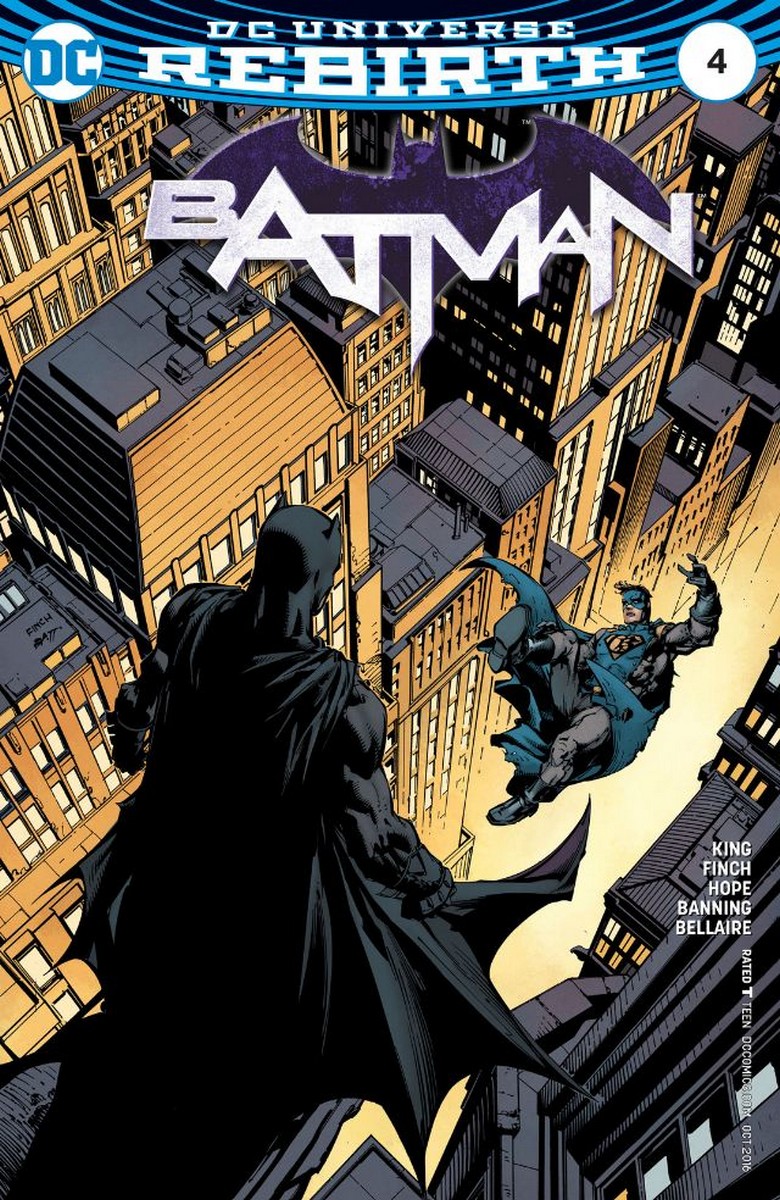 But, like all things Gotham, the Superman-esque Gotham gets brought low. Batman had high hopes for Gotham and his sister, Gotham Girl (confused yet?). Batman even tells the budding super hero he believes Gotham could be the hero that Batman never could. Instead, Gotham gets sort of mind controlled by Hugo Strange via Psycho-Pirate and goes on a killing spree and becomes a bad guy.

This isn’t parallelism, it’s just ground that’s already been tread. The Batman mythos is full of characters brimming with goodness and hope who are brought down and turned into villains. Two Face, for instance. Gotham isn’t Two Face, instead he feels like a cardboard standee of him with super powers.

Of course, all of this going to hell isn’t just randomness. There’s got to be a cause, right? Did Hugo Strange and Psycho-Pirate show up out of nowhere to start trouble in Gotham City by brainwashing Gotham-Boy? Oh it was Amanda Waller’s fault. Or something.

This is the high point of the arc for me. Amanda Waller is one of the most fascinating characters that DC has, and I’m ready to pay attention whenever she shows up in a scene.

The decision to make the meat of their conversation nine terse panels laid out in a grid is a fantastic one. It looks great on a page, and Waller and Batman could easily have some of the most intense conversations in the DC universe. If single page reviews existed this might be one of best since I read Injection.

Sadly, all good things must come to an end. Gotham-man/boy is evil after some contrived plot parallelism made him a bit more like Batman. Then he goes off to destroy Gotham, or something, and Batman is sad he trusted these two rookies after like three issues.

I’m still holding out for Tom King to really floor me. Omega Men was a slow burner too but I miss the punchiness of Snyder or the bombast of Grant Morrison. If not, at least All Star Batman comes out today.

Suicide Squad the movie opened last weekend to mostly crappy reviews. Regardless, it still managed to make over $130,000,000 in the box office. While I attribute most of this to modern society having an unhealthy Joker obsession, it’s still pretty wild to see a movie adaptation of a well regarded comic series that I love, but has not been successful for DC Comics until more recently.

This comic is a fast and dirty reintroduction to the origins of the Squad, and while it succeeds in introducing us to the series, it also feels like a cash-in to the movie, quick and dirty like the actions of the stars of the book.

I reread John Ostrander’s first issue of Suicide Squad from 1987 for this review. It always amazes me how much he accomplishes in that issue; 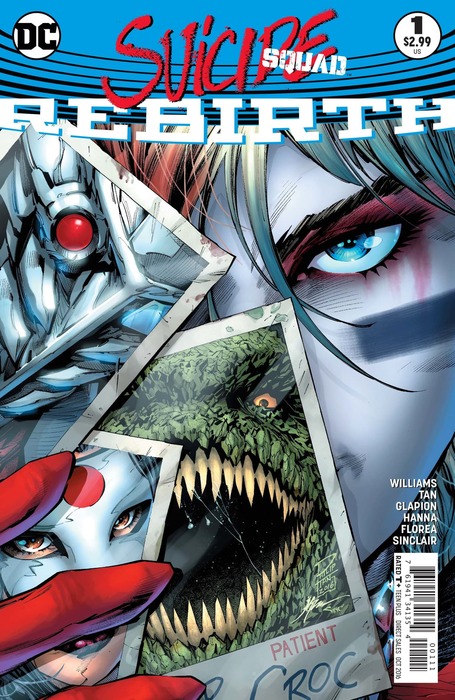 introducing a team of eight characters, showing us the brutality of the super powered terrorist villains right out of the gate, introducing conflict within the team (always a Suicide Squad hallmark), and giving us enough tension and setup of their first mission that you want to read the second issue right away.

In this issue we get a meeting between the team organizer Amanda Waller and a very Obama-looking president, a meeting with tainted good guy and supposed team leader Rick Flag, and then a wonky action sequence with three members of the team fighting an army of artificially super-powered characters. It’s fun, but I don’t know if I need to read the second issue right away. I just feel like too much of this comic is already predetermined by the movie.

For instance, the team in this issue consists of Boomerang (like Hammer dropping the ‘M.C.’ he has dropped the ‘Captain’ from his name), Harley Quinn, Deadshot and Rick Flag. There’s a lot of time spent with Amanda Waller and the president, Amanda Waller and Rick Flag, and not so much time with the team at the end. I guess we’re supposed to be acquainted enough with them that we can jump in on the action.

Deadshot, Quinn and Boomerang are also played by arguably the biggest name actors and actress in the movie, so this way of introducing them first really feels like the movie is writing the comic, and not Rob Williams, who otherwise does a solid job with this issue. Still, why does this not really feel like Suicide Squad at all?

This could be resolved in the next issue when they introduce the other characters, but for now I feel like the whole concept of Suicide Squad is lost to the demands of making a comic book about a “cool super villain team showing you how they can be a group of badass anti-heroes”.

This is supposed to be a disposable team of misfits fighting down and dirty against down and dirty threats. That’s why it’s called Suicide Squad. This comic is meant to expand on characters that the movie failed to expand on, yet it just seems like a rushed introduction. Katana and Killer Croc are on the cover, but where are they? I’m sure we’ll be seeing them soon, but it’s weird to not even see them in the background or in a panel.

I’m assuming this series will be better reviewed once the trade comes out, but to me it smells like Killer Croc’s Arkham cell. For now this issue just leaves me puzzled. How will the movie further inform the comic and the decisions made involving the characters?

Is Harley Quinn a good choice for a government black ops team, for any reason other than being a wildly popular character? And the lighter question of how Amanda Waller meet with both Reagan and Obama concerning Task Force X, aka Suicide Squad, and hasn’t aged a day?

I’m sure there will be more questions and shaking of my head in bewilderment to come, as is the case with many of the DC books and me these days.

Paper Girls #7 ended with the gut punch of a twist that Mac, the tough and fiercely loyal leader of our titular group of time-traveling 80’s kids, dies of leukemia around age 16, in 1992. That revelation is illustrated stunningly on the cover of the latest issue, which is one of the best single issue comic covers I’ve ever seen.

Later in #8, Mac and Tiffany discuss the implications of being a 12-year-old with an appointment to die, and what that means for the next few remaining years. Heavy stuff for what, in the book’s first arc, appeared to be a quirky time-travel narrative involving (possible) aliens. 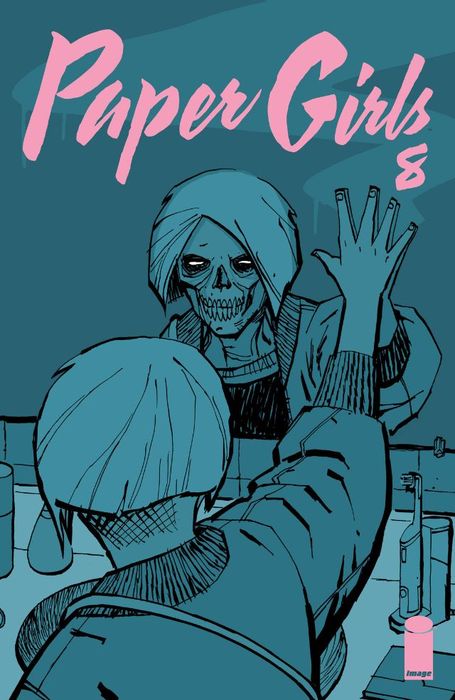 Speaking of those possible aliens, the notion that any of this adventure is the result of extraterrestrial influence might be put to bed in this issue, since as alien as the two tardigrades currently battling for dominance in downtown Cleveland seem, they are entirely of this earth, a fact commented on directly by one of the three Erins. Their massive size shift is obviously worth noting, however, as is the tardigrade’s ability to survive in space.

On the trio of Erins, just for record-keeping: our story now includes 1988 Erin, 2016 Erin, and future Erin, who intriguingly looks to be the same age as 1988 Erin. She also bluntly declares herself to be “one of the good guys,” which makes me, a devoted consumer of pop culture and its tropes, wonder if that’s true.

While delivering some satisfying character development, issue #8’s main narrative thrust is delivering all of our main characters to or on their way to Stony Gate Mall, where 1988 Erin and 2016 Erin search for clues to KJ’s disappearance. In keeping with the book’s ongoing motif of twisty cliffhangers, the clue the pair do find is a doozy.

Between Cliff Chiang’s art, Matt Wilson’s colors, and Brian K. Vaughan’s story of a scrappy group of youngsters undertaking an extraordinary quest in a bygone time, Paper Girls has been serving up 80’s sci-fi kid-adventure since beforeStranger Things made it cool. Which is to say, if you’ve finished bingeing the Netflix series and don’t know how to fill that particular nostalgia void, catching up with and adding this book to your pull list is one very good way to go.

The Blunt Force of Addiction

Playing With Our Emotions: An Interview with Yvvy