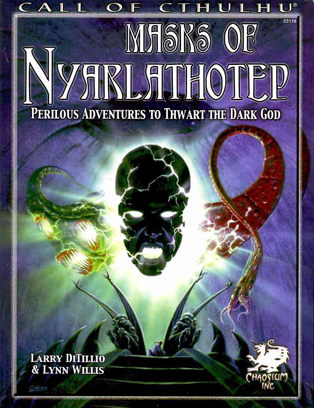 I spent much of my spare time last week reading and re-reading Masks of Nyartlathotep, the massive Call of Cthulhu role-playing game campaign that my group was about to start. I had piles of handouts – newspaper clippings, photos of the important people, notebooks, letters and more. In an olive green metal box were a stack of index cards that tracked notes for all the characters, plots and books in the early section of the game. I printed up a calendar for the year 1925 so we could track time and make annotations of important game events. Then there were the two giant maps of Manhattan that John (AKA Detective Henry O’Hara, the group’s loose canon cop) printed up so we could see all the players’ homes relative to the locations in the New York chapter of the campaign. All this is in addition to the casebook Ed (AKA Charlie Tippet, famed silent film actor) had been recording clues in for our run-up games.

Masks has a reputation for being one of the greatest tabletop RPG campaigns ever written and I wanted to make sure I did my part to make it so for my players.

I’ve run the game (or at least parts of it) before, around 1992. I am sure 14-year-old me didn’t do it justice. Ed and George (AKA Jack Chippa, Tippet’s bodyguard and valet) played it back then and don’t appear to remember any of it, if that is an indication.

I’ve had middling success with handouts in games before. My long-running Dungeons & Dragons campaign had its share, but they were mostly relegated to flavor. They were helpful for riddles and puzzles, but I doubt anyone really cared about my world’s elaborate cosmology (the world was flat, you see, and the sun a great magical engine and…no, you probably don’t care either). In most cases, no one wants to stop the fun to pass around a heap of papers to read.

That is the thing that most worried me about running Masks. The game depends on digesting huge amounts of information delivered in handout clues. If the players aren’t interested, they’re sunk. Death and madness awaits them.

Right at the start of the game, it went sideways. A pile of newspaper clippings gives the players the relevant background. I had emailed the scans earlier in the week, but who reads emails? What I had was a pile of paper that needed to be kept in chronological order for them to make sense and that needed to be read by six (already slightly tipsy) players. This was going to take forever.

Then George had a flash of brilliance.

“Can we have a wall for this? If all this stuff goes in a folder, we’re going to forget it all. If we really want this to be an investigation, we should be staring at it all the time.”

So I took down the Graveyard tour poster and handed the gang a roll of ancient masking tape. Up went the photos and clips, all labeled. Some have already moved around as relationship have become clearer. Honestly, all we need is some red string and we’ll be a peak Conspiracy Theory.

In my browser window, I have multiple tabs devoted to getting the biggest possible cork board for the cheapest price.

This isn’t going to end well.

This is going to end awesomely.

I’ll have plenty of things to say about Masks after we get a bit further into the campaign. In the meantime, let’s check out the March issue, eh?

Our theme this month is Bad Luck. What do the pair of goblins on our cover have to do with that?

The artist, Scott Wygams wanted to depict good luck wrapped up in a bad package. Pigs and roosters are considered good luck by sailors and so we have two goblins riding pigback, one wearing a rooster skull and feathers on his head. Their good luck means bad luck for anyone who crosses their path.

Wygams says, “I came onto the idea when looking up folklore regarding sailors luck, and did a little research into the idea of what a traditional kobold is – a benevolent being who helps with ship duties, but can only be seen by a doomed crew.”

Our theme stories begin with a lovely bit of paranoid fiction about the bad luck of living at the end the world by Peter Olafson. Tim Mulkerin has a nuclear jinx in SimCity. Logan Ludwig is convinced Spelunky doesn’t play fair. Ashley Barry gets to meet her hero…in a snow storm. C. T. Casberg reveals he has the unluckiest profession in the world: henchman.  Will Harrison has the misfortune to encounter internet problems at a critical moment in World of Warcraft. Amanda Hudgins can’t get Shepard to get lucky in her playthrough of the Mass Effect games. Finally, Samuel Wicks argues that there is no such thing as bad luck in games, just bad play on your part.

Of course, during the layout of this issue, just shy of being finished, 30-something pages inexplicably vanished and had to be manually rebuilt. There is a lesson in there somewhere about themes and self-fulfilling prophecies.

In Variation, Brock Wilbur is joined by Nathan Rabin (formerly of the A/V Club) to suffer through the 1994 Street Fighter movie (Godspeed, gentlemen). Ario Elami reveals the strange, special mystery of Dark Souls’ Path of the Dragon. Steven Wright looks at two similar RPGs  – Undertale and LISA – and makes the case for more tastemaking from games critics. Finally, I chat with the folks behind Retro Invasion for our ongoing Epic-sponsored series Revving the Engine.

All our fantastic monthly columnists are back in Thoughts. They’re all great, but I particularly enjoyed Richard Clark’s musings on left-to-right movement in videogames, Andrea Ayres’ explanation of the Trump phenomenon and Adam Boffa’s revisiting of the recent Grand Theft Auto game criticism. There’s also one hell of a Minotaur by Melissa Graf and a gallery of artist Dominic Sohor’s metal-theme work and, well, just scroll down and find out!