Difficulty is tough to get right. Some people crave the elation of conquering an enemy that has defeated them a hundred times before, while others cringe at the thought of spending hours fighting the same battle again and again and again.

Balancing challenge with accessibility is always a topic of hot debate, regardless of which way the scales tip. While the trade-off is, to some extent, a design decision particular to a game’s identity, there are certain universal considerations that separate the good kind of difficulty from the bad.

Two recent games serve as pertinent examples. Party Hard, a murder-puzzle game where you have to eliminate noisy party-goers without attracting the attention of the police, is an unfortunate example of cheap difficulty predicated on unpredictability.

Furi, on the other hand, delivers bullet-hellish twin-stick shooting and twitchy melee combat for which you are always adequately equipped. Let’s take a closer look at the key differences between these two approaches.

Feeling in control of your fate is critical to a good challenge, and it is here that Party Hard first stumbles. Each level is populated with a selection of traps that can be used to dispose of enemies without drawing attention to yourself. These traps are randomly distributed each time you attempt a level, and some are far more useful than others.

A bad selection can make a level significantly harder, and repeatedly restarting until you get a decent distribution isn’t fun. Worse, the behaviour of enemies within a level is just as unpredictable, making it difficult to plan out strategies for taking them out. 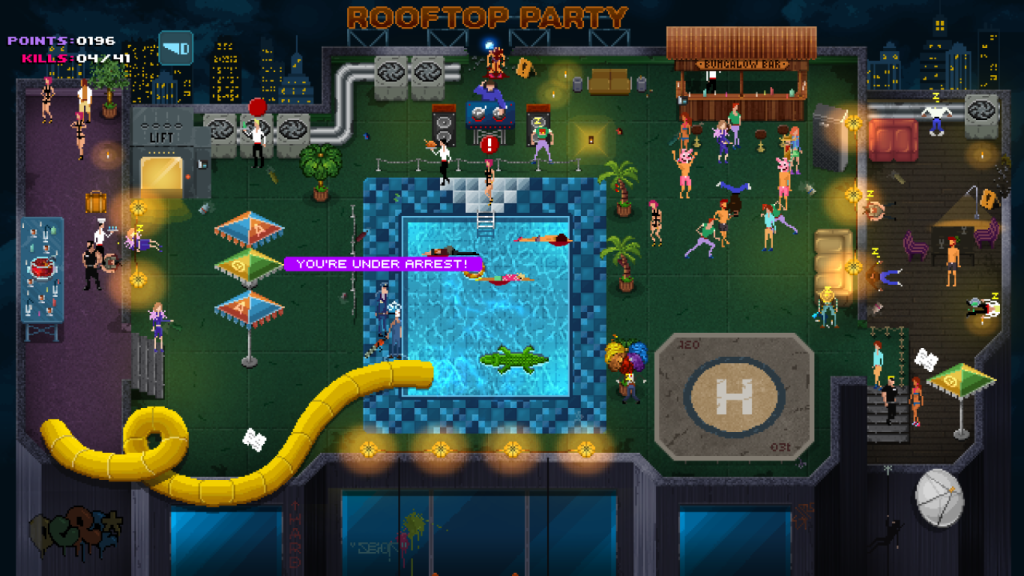 Furi is the antithesis of this design. Enemy attack patterns are tough but predictable. They respond to your tactics consistently, allowing you to build up a battle plan and progress further and further. That progress is essential; every failure in Furi is a lesson in what not to do next time. Death is a tough teacher, but an instructive one all the same.

In contrast, failing in Party Hard often feels inexplicable. Enemies identify you as the killer even when you’re nowhere near a dead body, witnesses spot you through solid objects, and civilians start fighting you without provocation. Worse, Party Hard delights in instant failure. One mistake can put you in an unwinnable situation, chased down by an inescapable cop or knocked out cold by a bouncer’s punch.

Combined with the fact that Party Hard demands excessive patience while you wait for targets to isolate themselves from the group, and you can easily lose half an hour of progress from a slip-up you didn’t even make.

Furi is hardly perfect, but it understands difficulty in a way many games don’t. Nor is Party Hard a bad game; it is simply a bad challenge. Punishment and unpredictability do not make a game difficult; they just make it frustrating.

The Fresh Ingredients of Furi

Games Should Make Us Smarter, Not Stronger

The Blunt Force of Addiction