The following is a reprint from Unwinnable Weekly Issue Forty-Nine. If you enjoy what you read, please consider purchasing the issue or subscribing.

Where do iOS games come from, anyway?

Geoff Gruetzmacher is a Brooklyn-based Arduino enthusiast and amateur iOS developer. His latest app – a game, code-named Vasenuts – is currently in beta.

In an exclusive Rookie of the Year Q&A, he takes Unwinnable Weekly behind the scenes as he conceives, develops and, soon, releases his latest creation.

The premise of Vasenuts is that the player is a factory worker in charge of dumping packing peanuts into crates to protect priceless vases. Too few, too many, poor placement and the vases get destroyed. What the heck gave you the idea for this?

This didn’t just come out of thin air, it was a long, weird road to get there. I’d been noodling around with new game ideas all last summer – and one thing I’m super interested in is taking casino gambling mechanics and tweaking them for mobile gameplay. So my first game was a simple video poker game called Gold Rush Poker – but unlike the millions of other video poker apps on iTunes, mine allowed you to play 5,000 hands at time. It was fun, and made a little bit of money, but had limited appeal. Basically, the only people who play mobile video poker are people who play casino video poker. I was still fascinated with the poker mechanic but wanted to broaden it to be more appealing to everyone. What was the biggest casual game last summer? Candy Crush. I downloaded the half dozen poker-based match-3 games on the app store, decided they were all lame and set off to make my own.

So, yeah, this game started out as a poker-based match-3. After hacking away at it for a while, I realized a huge problem: playing cards are hard to read as match-3 tiles. With suit and value, it’s just too much information on-screen in a 10×10 grid. So I changed it up, got rid of the playing cards and made the tiles solid colors and went down the path of a more traditional match-3. It became more of a Tetris-y, Columns-y, Dr. Mario-y type thing. My idea became that the game was all about drilling down and opening up holes through the final row of tiles to let things through. It was either going to be seeds or water droplets or gold bricks, I don’t remember exactly, but the important thing was I started testing having things fall through the tile grid. I started by just making a button that dropped balls into the play-field. 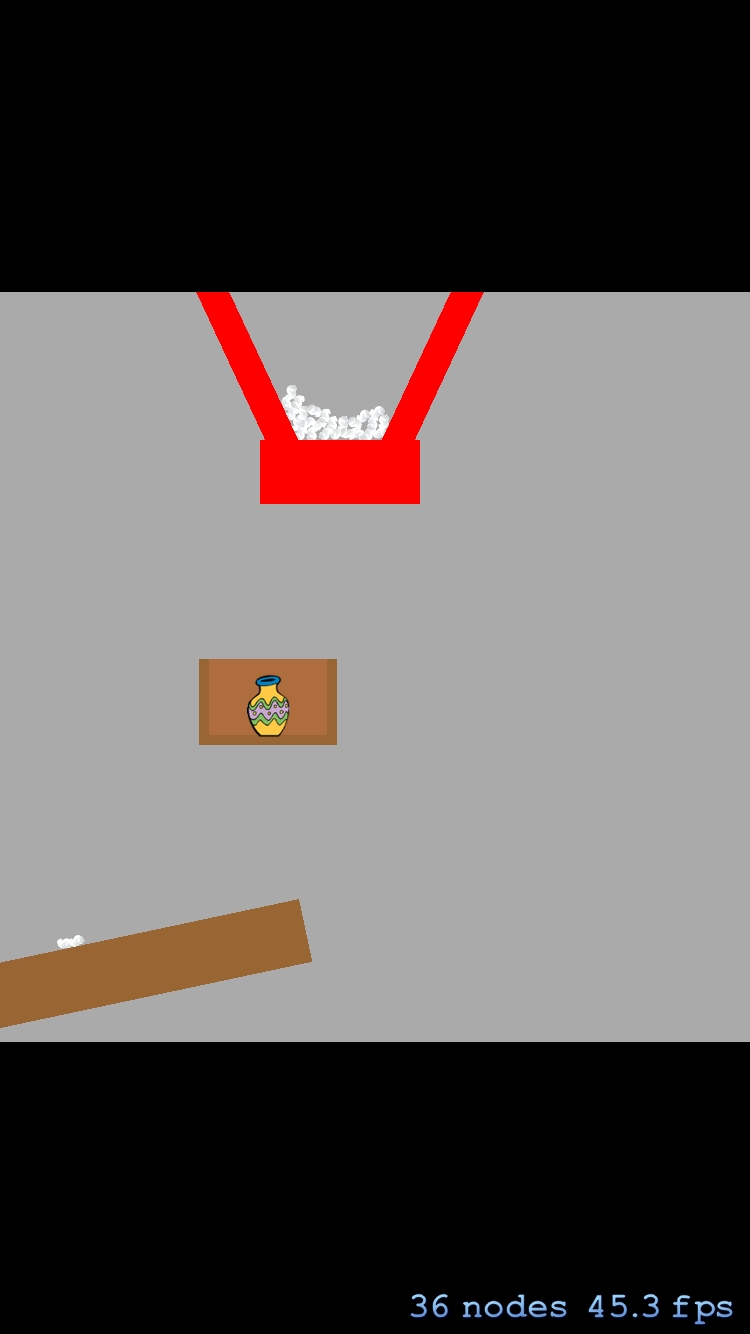 Hitting that button and watching the balls drop ended up being more fun than playing the game. It was so satisfying, I started thinking of ways to make that into a game. I tried to think of jobs that involved dropping and somehow ended up remembering a scene from the movie Junebug where a couple of the yokel characters work in a place-setting warehouse. There’s a montage that’s basically what ended up being the game, except with china plates instead of vases.

As a layman, I have to ask: How difficult was it to make this game? Specifically, I wonder about the process of creating the physics for how the packing peanuts interact with the vases.

Well, I’m not a programmer, nor do I have a computer science background. I’m a TV editor. But I’m also a huge nerd. So, making the game wasn’t terribly difficult – it was the three years before making the game where I taught myself Objective-C and Xcode by making my other apps that was hard. Now I’ve kind of got it down.

Granted, this was my first time-based, arcade-style game. For that, Apple does make it easier with this framework called SpriteKit. It let me simply set up a scene and let the physics engine take over. So, for instance, I didn’t write the gravity or collision mechanics. I just told SpriteKit, “every three seconds, add 50 new packing peanuts just above the screen,” and SpriteKit handles adding the gravity, colliding them with the bottom of the hopper door, letting them drop when the hopper door opens, etc.

So, simple to get working at a basic level, but then lot of time noodling with the internal levers of things like how bouncy boxes are, how much does each peanut weigh in my virtual world, how fast do boxes move, how much randomness should be present. People say balancing the game is the hardest part, and that seems true here.

You’ve made iOS apps and games before. Not to disparage them, but I gotta say, this one feels a lot more polished, less like the work of a hobbyist and more like a game people might actually pay for. Is that because your skills have multiplied? Because you’ve sunk more time and resources into it? A combination of the two?

My video poker game suffered in polish because it’s a bit sprawling. Five screens, a bunch of dialog boxes, nine different themed video poker machines you could play. Finishing it, I realized what an undertaking even a simple app is. So with this one, I was determined to keep complexity to a minimum. Just two screens. Just one never-ending mechanic. No godforsaken in-app purchases requiring their own awful screen. I was able to focus a lot more of my polishing time on much smaller details.

To toot my own horn for a minute: As a TV editor, I feel like I have a good sense for certain things that a lot of amateur developers get wrong. Like timings of animations, and music and sound effects and how they work together. After a decade of putting together shows, I think I do that stuff pretty well and it shows. And after three years of programming for iOS, I’ve figured out how to make what’s in my head appear on the screen. 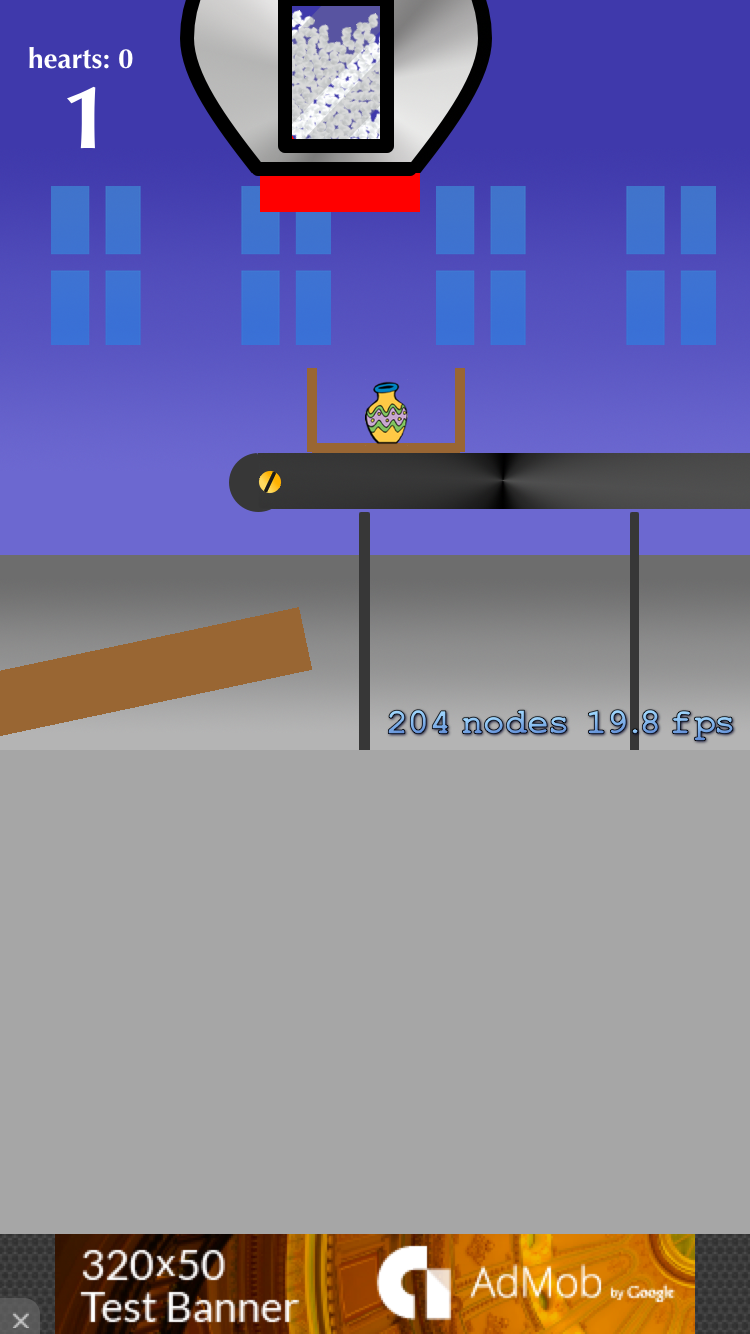 Sidebar: One thing I definitely knew I needed to do that is so dead simple, but most games get wrong is “tap anywhere to play again.” When games like Super Hexagon and Wave Wave first did this, it seemed like such the obvious way to restart a one-touch game. But so many great games (Flappy Bird, Mr. Jump) get this wrong and make you tap a tiny button. I think the fact that your finger can be anywhere and you’re immediately back in the game makes it feel polished…and addictive.

One thing is that you got an artist to make it look pretty. How did you find this person? Did you pay them up front? Promise a percentage of future earnings?

The art is the huge difference between polished and not (Especially since your art is what shows up in your App Store screenshots, not your perfectly timed animation). I just happened to find a great illustrator in Indonesia on elance.com, a nifty freelancing marketplace for all sorts of digital jobs. (Bayu Sujaya also did the second round of art for the poker game, so he already knew what I liked.) He’s great. I sent him my super rough version of the game and he filled in all around it.

When I was starting out, I figured I could do art myself too, but that simply isn’t true. I’m pretty much always going to farm out my games’ art.

So I’ve been among your friends who have been beta testing Vasenuts. And one thing I asked for after playing it for a while is that you make it a little easier. Your response was to mention one of my current iOS obsessions – Mr. Jump – and how the intense difficulty of that game seems to make it all the better. Why is that? And, on a larger level, what does that mean, if anything, for iOS games in general? Is it finding some middle ground between hardcore gamers and casual gamers?

Well, Vasenuts is the awful working title. When are you publishing this? I should probably come up with a real name before then. Names are hard.

Anyways, Flappy Bird is the spiritual predecessor to this game. So while the sparseness of the game is inspired by it, so is the difficulty curve. Flappy Bird took me something like 20 tries to score two points, but I couldn’t stop playing because it seemed so easy. This isn’t Zelda where you’re wandering around wondering what to do. You know exactly what to do, it’s just a matter of execution. Every time I died, I knew what I’d done wrong. That’s what I tried to do here. (Not to say that there aren’t some tricks to not breaking your vase that players have to figure out through trial and error…but the goal is immediately obvious.)

And – I dunno – I think that sort of thing pings the reptile brain somehow. And when you get it right, and hear the little bell ding, it think it activates a pleasure sensor exactly because it’s hard. Clear goals plus slightly hard to do are gaming bliss.

Something else I love about the game is how monotonous the music is for the first 15-20 seconds, but once you get good enough at the game to pack several vases successfully, the music opens up and has a SimCity factory work vibe to it that’s kind of its own reward. (Hat tip to Kevin MacLeod – the internet’s patron saint of free-to-use Creative Commons music.) 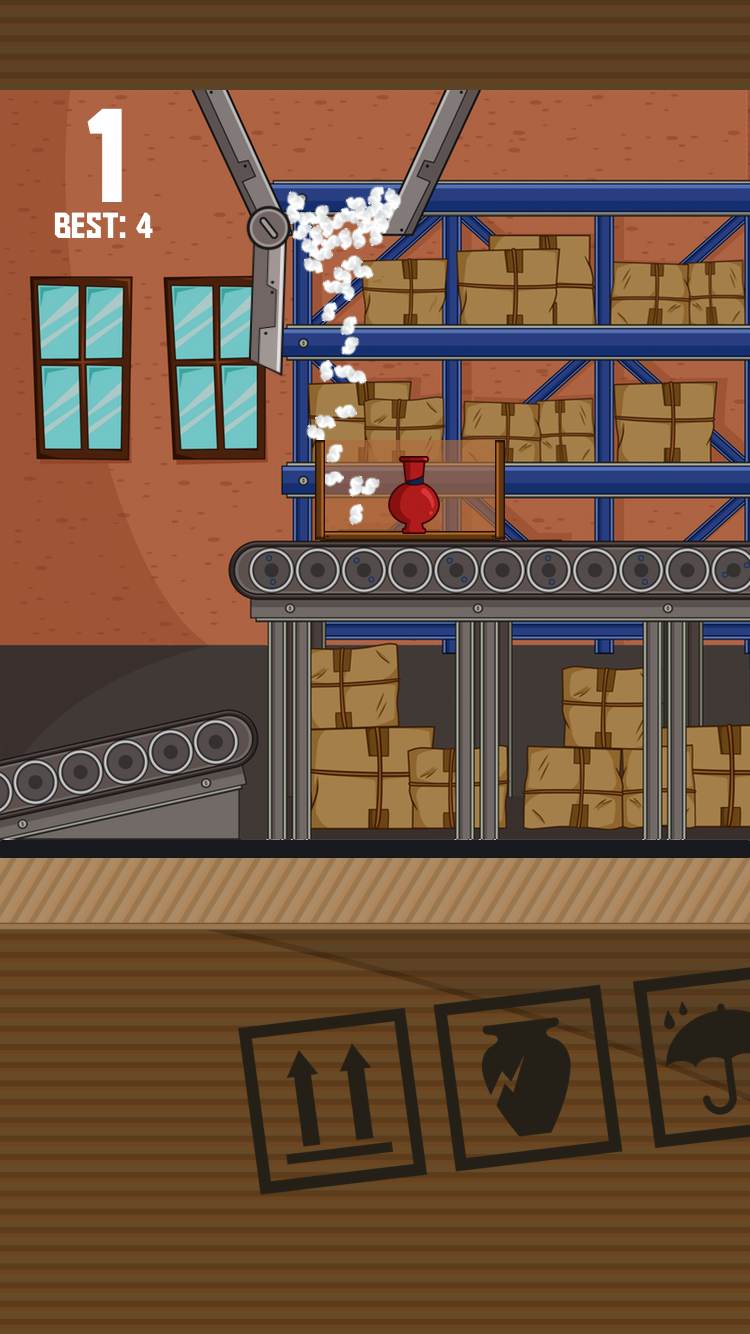 How long will you beta test? When can people get their hands on this game? And will you take any of my numerous brilliant suggestions for the official title?

One beta tester said, “It’s great. I love it. But you should add four or five more minigames to just mix up the gameplay.” That’s a great idea, but I’ve been working on just this since November, and it wouldn’t be shipping until 2017. I’m ready to just get this out the door and see what people think.

So, honestly, I’m pretty much done. I think the next beta build will be the shipping version. People’s reaction to this game has far exceeded my expectations. (Actual text messages I’ve gotten: “FUUUUUUUUCK YOU!” Ten minutes later: “I got 7 vases, I can’t stop.”) Going back to Flappy Bird, that love/hate thing is exactly what I’m going for.

So expect to see it on the App Store in a couple of weeks. (You’ll be able to find it here.)

As far as my expectations, obviously, you want to be Crossy Road. Or you want Justin Beiber or Oprah to tweet their high score. These things are all just lottery tickets for guys like me. We want to create something and show people a good time…but if for the next Super Bowl we’re buying ad time with Kate Upton, that wouldn’t suck either.

As for a title, I like Pack Man (one of yours). I know you love Ace of Vase, but I think vases are not the sexy part of the game. Another tester suggested Frajeelay. Don’t Break the Vase and Protect The Vase have been thrown around. I like Nut Job or Nutpack (hehe), but my wife thinks nut is too abstract. The real problem with the title is there is no pithy word for Styrofoam packing peanut. Wish I’d thought of that before I started.

Matt Marone is a senior MLB editor at ESPN.com. He has been Unwinnable’s reigning Rookie of the Year since 2011, which seems paradoxical until you learn he would rather celebrate the return of geoDefense than find a new favorite game, has a nickname derived from wearing an orange traffic cone on his head and still doesn’t undestand why the @$@$&@@ you need two goddamn directional pads just to walk down an effing hallway. You can follow him on Twitter @thebigm.